For all the huff and puff that have surrounded new Australian batting sensation Phillip Hughes, you would half expect him to arrive in England in a locked cage under armed guard.

Much has been made about the potential impact Hughes could have on this summer's Ashes.

Instead, standing at 5ft 7in, he looks exactly how you would imagine an average 20-year-old Australian from upstate New South Wales would do.

But despite his age, Hughes talks in the cricket soundbites of a far more experienced player.

"I'm here to play good, hard cricket and string wins together," the left-handed opener said at his unveiling at Lord's. "I want to be positive in everything."

Hughes, who begins his English education with a six-week stint at Middlesex, bears an uncanny physical resemblance to another New South Wales protégé, Michael Clarke.

There are similarities in their cricket too - the duo share the same coach/mentor, Neil D'Costa, both scored Test hundreds within two matches of their Test debuts and have been touted as new Bradmans. 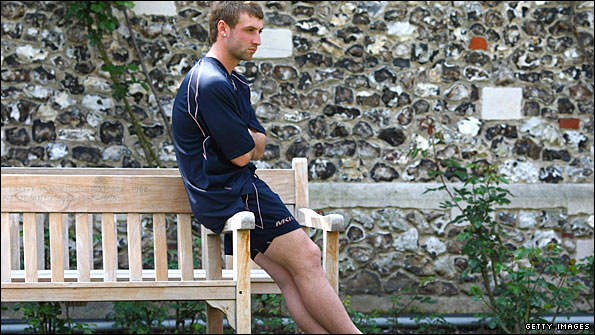 "It has definitely been full-on the last couple of months, I've thoroughly enjoyed the last five or six weeks," said Hughes, who was brought up in Macksville, a small New South Wales town 280 miles south of Brisbane.

Hughes was 16 when Ricky Ponting's side lost the Ashes for the first time in 18 years, spending plenty of late nights and early mornings watching the 2005 series with banana farmer father Greg.

A year later, He moved to the bright lights of Sydney to work at a cricket school with D'Costa, who mapped out a simple blueprint: "Unless you're here to replace (Matthew)
Hayden, I don't want you to come to my academy."

"We knew there would be a spot there (Australia Test team) in a few years time," said Hughes.

"You want to be organised and plan out things, it just happened to go out that way.

"It wasn't that hard. I had to get runs in the NSW side and go from there."

And the runs flowed like a vintage Australian red. He outperformed NSW team-mate Phil Jaques and Victoria's Chris Rogers in state cricket on his way to becoming the youngest player ever to score a century in a Pura Cup final, the pinnacle of the domestic competition in Australia, in 2007.

His first appearance in the Baggy Green in February this year was something to forget - caught behind for a fourth-ball duck attempting an ugly upper cut to third man.

His second innings at Johannesburg's Wanderers - 75 from 121 balls - was packed with flashing drives, scything cuts and brutal pulls against the pace attack which had ripped England to shreds six months previously.

His second Test at Durban's Kingsmead is the stuff of legends - becoming the youngest batsman to score two Test hundreds in the same match (beating George Headley's 80-year-old record).

He brought up his maiden ton with two successive sixes off left-arm spinner Paul Harris on his way to 115 before an even more impressive 160.

"I have never done that before," said Hughes. You and pretty much everyone else, Phillip.

"If I see a ball and it's there to be hit, hopefully I will hit it into a gap, it's something I have always done.

"I'm on the go a fair bit. Everyone's different - and I like to play my own game."

Hughes' much-anticipated arrival in England has not been greeted with universal delight.

Former England captain Alec Stewart said it was "wrong" to give Hughes the opportunity to acclimatise to English conditions ahead of a defining summer, while national selector Geoff Miller doubted whether the Australians would reciprocate a similar policy for England players down under.

The reality, however, is slightly different. First, Hughes signed for Middlesex in February, a month before he created cricket history against South Africa in Durban.

And two, six weeks is hardly sufficient time to send England's bowlers to the very depths of despair, according to his Middlesex opening partner, who will also happen to be the man standing at first slip when Hughes makes his Ashes bow at Cardiff on 8 July.

"I will be opening the batting with him next week, I will see him up close and personal," said England captain Andrew Strauss with a poker face that could win millions in Las Vegas.

Hughes revealed he rejected overtures from the Indian Premier League to play in the County Championship, where Middlesex will start in Division Two, repeatedly emphasising his desire to learn more about English conditions.

"You hear about the different balls, the weather, the wickets. It will be a good confidence thing going into it," he said.

"I know the Ashes is two months away, but the biggest thing is my six-week stint with Middlesex."

Hughes admitted he "couldn't tell" us much about Glamorgan's bowling attack, his first opponents in a Middlesex shirt on Wednesday at Lord's.

Give it six weeks, England will know everything about you, Phillip.