Sunday is a massive day for all of us - without a doubt it will be the biggest day of our cricketing lives and something we have all been working so hard for.

The majority of the England squad played in the 2005 World Cup when we didn't reach the final and I know that hurt.

To be this close therefore to achieving our ambitions is so exciting - but also a little scary. 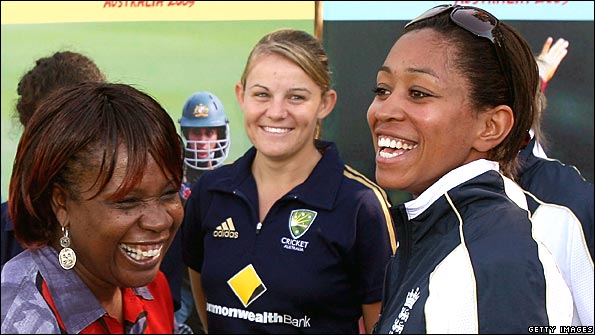 We know all about New Zealand, having played them in our first Super Six game last weekend. On that day, we won the toss and elected to bat on a pitch that had a bit of life in it for the bowlers. The outfield was slow and it required intelligent batting to set a total of 201-5. We then managed to restrict them to 170 all out with our girls fielding like demons.

Last Sunday, we had a much-needed day of rest, so it was off to Bondi Beach again with a few of the girls and team management.

It proved an interesting experience as, after being hit by a wave, I found myself facing our strength and conditioning coach Crumpy (Ian Crump) with my bikini top hanging half off - and exposing myself to half of Bondi Beach.

It was back into training next day for the game against West Indies at Drummoyne Oval and as we had been unbeaten in all the games to date, we knew if we won this we would qualify for the final.

Again we batted first and achieved a healthy total of 236-8, with Sarah Taylor making a well-played 78 and Claire Taylor batting aggressively for a quick half century. Again, we managed to finish the game of clinically, bowling them out for 90.

Our last Super Six game was against Australia, a televised match with a good crowd of over 2,000 and the North Sydney Oval painted pink for the McGrath Foundation Day.

Unfortunately, on this occasion we put in a poor performance to collapse from 106-3 to 161 all out, with 49 from Claire Taylor the only highlight. With not enough runs to defend, the Aussies finished things off in the 34th over.

It wasn't the best preparation for the final, but it was just one bad day and we are now spending time in training putting everything in place to play the Kiwis.

There are inevitably a few nerves at the prospect of playing in a World Cup final, but the overriding feeling is one of excitement that we could potentially be World Cup winners come Sunday night.

The other option doesn't bear thinking about!