Who would make your team of the year?

Normally when I am abroad with the England team at this time of year it is very difficult to feel particularly Christmasy especially when the sun is shining and the temperatures soar. However when I arrived at the Punjab Cricket Association on the third day it felt more like winter in Manchester than December in Mohali.

As Jonathan Agnew put it as he welcomed listeners on TMS it was "a real pea-souper". We could not even see the field at 9.00am local time when play was due to begin because of heavy fog in Chandigahr and when umpire Daryl Harper was asked when he thought he would next inspect he told the interviewer "when I can see the other side of the ground"!

However although the weather may be wintry there aren't too many signs of the festive season here in the Punjab. In the team hotel where we are also staying there is one rather sad looking Christmas tree decorated with cotton wool. It is quite difficult to see the tree as it is normally obscured by numerous armed security forces.

Literally every seat in the hotel's foyer is occupied day and night by soldiers and before you can get into your room you have to go through at least three bag and body searches.

Of course this extra security comes about because of the terrible events in Mumbai at the start of the month and we all expected to see it. However at times it can be rather excessive.

For example on the way to the ground today the car I was travelling in was stopped at a roundabout along with all the other traffic to allow the England and India team buses to go past. Nothing unusual about that of course. But I then witnessed a security man wielding a lathi stick striking a couple of locals who were waiting patiently at the roundabout, but had inched their bicycles to the edge of the road rather than staying on the kerb. We all hope that the heightened security we have experienced during this Test tour is not going to become the norm in the future. 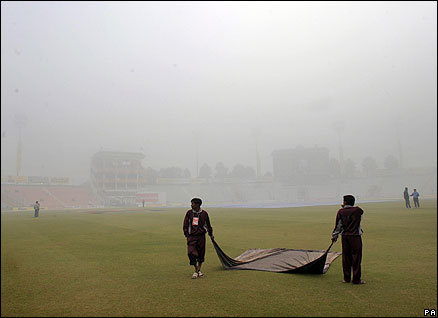 When play finally began in the Test match we had plenty of drama with England wickets in the first two overs, plus the imaginative decision to give the third over to occasional spinner Yuvraj Singh which nearly resulted in the dismissal of his so-called bogey man Kevin Pietersen.

There was lots of interesting talking points elsewhere as well. The front page of the Indian Sunday Times had a headline "England may get slice of IPL action". The article suggesting that the Indian Pemier Twenty20 League may be split into two with five weeks being held in India and three in England.

The England and Wales Cricket Board refused to discuss the story but eventually released a statement stating that talks regarding future tours and Twenty20 cricket will continue in January.

Ravi Shastri who is working for TMS here in Mohali is on the IPL board and he told the programme that although he had not heard anything about the story he was "pleased dialogue is taking place between the ECB and BCCI. It is important players like Andrew Flintoff and Kevin Pietersen play in the IPL." However he urged caution, adding: "There are lots of newspapers in India, all looking for a story."

We then had news from Perth of South Africa's amazing run chase, the second highest in Test history, to beat Australia. That fantastic match of course follows the incredible game in Chennai where India scored more runs than any team had ever done before to win a Test in this country. These results suggest that reports of Test match cricket's demise may be premature.

It certainly has been quite a year for stories in the world of cricket.

The IPL, Michael Vaughan's resignation and the start of the KP captaincy reign, shoulder barges, switch hits, Champions League and Champions Trophy tournaments being on and off etc etc and during Monday and Tuesday's lunch intervals on Test Match Special we are going to be reviewing the last 12 months as well as looking ahead to 2009.

And as always we would like you to get involved so please e-mail us at tms@bbc.co.uk or comment here on the TMS blog.

What were your highlights of 2008? Who are your stars of the year? Maybe you would like to offer your team of 2008. For what it's worth, and to start the debate, here is the side I came up with when I couldn't sleep last night. Feel free to disagree.

Graeme Smith Automatic selection. At the time of writing the leading run-scorer of the year and, after leading the epic run chase in Perth plus a similar effort at Edgbaston, he is also my captain.

Virender Sehwag Just sneaks ahead of Indian team-mate Gautam Gambhir because of his ability to change a game.

Ricky Ponting A few troubles as captain , but still a great batsman.

Kevin Pietersen An amazing year for KP with another 1,000 runs in the calendar year.

Sachin Tendulkar Maybe an emotional choice after Chennai, but his efforts just put him ahead for me of the likes of Laxman and Hussey.

Shiv Chanderpaul ICC player of the year. May not be elegant, but so effective.

Kumar Sangakarra Wicketkeeper. Although he does not always take the gloves for Sri Lanka, he's behind the timbers in my team just ahead of MS Dhoni.

Andrew Flintoff A thrilling return from injury. Great bowling and more promise with the bat.

Zaheer Khan Very difficult to choose between Zaheer, Dale Steyn, Mitchell Johnson and others but I go for Zaheer for his intelligence and great record against Australia.

Ajantha Mendis What a combination with Murali. The most exciting new spinner since Shane Warne with 26 wickets in three Tests