Another tour of India, albeit one with a tragic twist that overshadowed much of the cricket played, came to an end here in chilly Chandigarh.

The events of Mumbai are still fresh in the mind for all of us who were in India on that fateful night and led to some hasty itinerary changes once it had been confirmed that the Test matches would go ahead.

Internal flights had to bought at extremely short notice - at sky high prices - and some of the routes home to the UK for Christmas from Chandigarh have to be heard to be believed!

But whether they travelled up from the first Test in Chennai or flew in from the UK for just this Test England's supporters will take away two enduring memories above all others - the frisking and the fog.

Let's start with the fog, which delayed the start of play on the last three days. 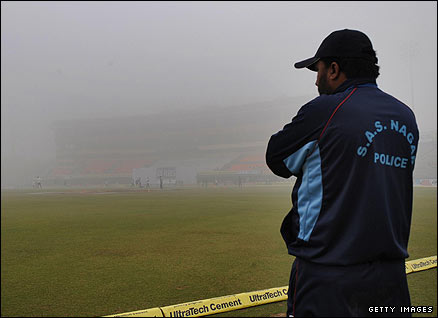 This wasn't just any ordinary mist but, at times, a good old fashioned pea-souper that enveloped the city until the midwinter sun finally broke through in mid-to-late morning.

One really had to feel sorry for those fans who were expecting a week in the Mumbai sun, having booked up many months ago, and who found themselves shivering in the Hotel Majestic as they sipped hot tea waiting to hear news on the prospects of play.

It was as far as could be removed from the images usually associated with cricket in India - imagine cricket at Headingley, not in April, but in December itself and you get the general picture!

But the fog was just a minor inconvenience compared to the searches conducted by Punjab Police officers of spectators wanting to enter the PCA Stadium to watch the Test.

The authorities in had promised to throw a 'ring of steel' around the stadium and they were as good as their word.

Around half a kilometre from the ground tickets were quickly checked and preliminary frisks, all normal and straightforward, took place.

However, it was at the gates to the ground where things got more 'interesting'.

Imagine if you will - and I'll make this all as polite as possible - four policemen assigned to ensure that each and every spectator is not trying to smuggle anything untoward into the stadium.

Now imagine two of those policeman sitting on chairs, one of whom is to check, very, very thoroughly, that you aren't smuggling anything alongside or underneath what we might call 'the family jewels' and the other whose role is to ensure that you haven't got anything hidden 'round the back' - and meanwhile, the other two more policemen are checking the usual places including a very close examination of your armpits!

You then turn into the gate itself and there are four more policemen to repeat the process and do an even more thorough and intimate job . It's no exaggeration to say that in parts of the world some people pay good money for a lot less!

On a personal level, however, the draw at Mohali was as good as it got for me.

Having missed England's initial warm-up victory in Mumbai, it was a sorry tale of seven defeats and a draw as I made my way by train across this massive but fantastic country.

It's been a long slog without an England victory to cheer, but as ever in India, other than maybe just one win, I wouldn't have changed a thing.