Australia outdone by a superior side

India did the unthinkable by beating Australia 2-0 and regaining the Border-Gavaskar Trophy. Very few people gave India a chance of beating Australia but India not only defeated them, they did it in convincing style. India outplayed the best team in the world in every department.

The Indian batting shone in almost every innings and made the Australian attack look toothless. The openers set the tone in almost every game and the middle-order barring Rahul Dravid built on that. Dravid's form is perhaps the only area of concern for the Indians but he's too good a player to be short of runs for too long.

The Australian bowling-attack never looked like taking 20 wickets in a match, which is obviously a minimum requirement to win a Test. They managed to bowl India out twice only once in four Tests which underlines their ineffectiveness.

Despite the lack of a quality spinner in their ranks everyone expected a more spirited or perhaps more strategic approach from Australia. They're known to have plans for every player and every situation but they seemed quite clueless on more than a few occasions on this tour.

The Indians, meanwhile, not only seemed to have their plans ready but they also executed them to perfection. Whether it was a different line of attack in Mohali from the fast bowlers or a slightly negative line of attack in the last Test to dry up the runs, India managed to change gears almost at will and with that the momentum on various occasions.

The Indian bowling asked more questions than the Australians had answers for. The Australians must've been prepared to play a lot of spin as the Indians are traditionally known to bank on their spinners to do most of the damage, but the quality of fast bowling India displayed surprised Australia.

India have a top-quality new-ball attack at their disposal in Ishant and Zaheer. While Zaheer is a seasoned campaigner and swung both the new and the old ball appreciably, Ishant bowled with a lot of vigor and aggression. Both managed to get the ball to reverse swing and laid bare the Australian batsmen's weakness to handle it successfully. It reminded me of the famous Ashes series in 2005 in which the English bowlers too exploited this very weakness in the Aussie batting line-up to produce a remarkable series win. 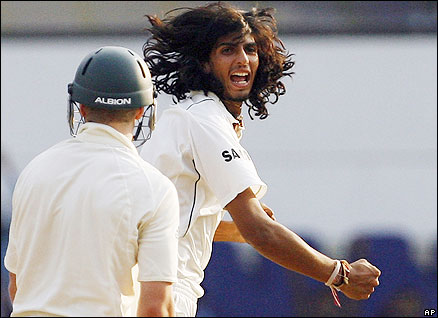 This series was also the last one for both Kumble and Sourav who retired from Test cricket after it. It seems to be the end of an era in Indian cricket: an era in which India graduated from a tough team to beat at home to an almost invincible team in home conditions. India started winning more games while touring overseas as well.

The good thing is that they've left the team in able hands and the future looks promising. Please don't get me wrong, they will surely be missed because it's tough to fill the shoes of such icons but the team seems to be moving along in the right direction.

Coming back to the game in Nagpur, India did all the right things in the match to put themselves in the position of regaining the Border-Gavaskar Trophy. It started with winning the toss and then just doing the basics right. The pitch didn't offer much to the bowlers with bounce being on the lower side and the pace on the slower.

Tendulkar went on to score his 40th Test century and his 10th against the Aussies. If a team needed to force a result, it was Australia and for that they had to create opportunities. Instead they dropped catches and allowed India to score 441 in their first innings.

The only bright spot for the Aussies was debutant Krejza, who took eight Indian wickets in the first innings to go with the four in the second. He got a lot of tap from the batsmen but showed a lot of heart to flight the ball and look for a wicket despite taking the beating he did and his brave bowling display was rewarded with a man-of-the-match award on debut. 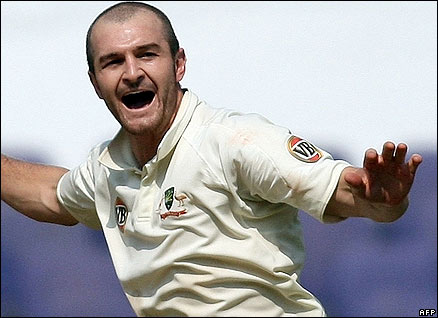 Some of the tactics employed by Australia surprised me. After a solid start in the first innings where they were scoring at nearly four runs an over (189 for 2 in 49 overs), they went on to score just 166 runs in remaining 85 overs on day three and played into India's hands. On the fourth day they managed to reduce the Indians to 160 odd for 6 at tea and were within striking distance of wrapping up the innings in quick time. But they started off with the part-time bowlers and let the opportunity slip once again.

Yes, the overrate was slow and the captain would've been penalised with a one-Test ban but letting go of the chance of winning the Test and with it retaining the trophy didn't make sense.

India managed to claw their way back into the game and once they had the cushion of 382 runs to bowl with in the last innings on a day five pitch, the trophy was theirs even before the result was known.

Australia tried to chase the target but made a right hash of it. They were outplayed by a superior side and the questions regarding their supremacy on international cricket loom larger than ever.

India take on England in a seven-match ODI series followed by a two-match Test series.

While England have shown great improvement under Pietersen's captaincy, beating this Indian team would take some doing. Personally, I would've preferred at least one, if not two, more Tests because seven one-day matches are a couple too many to keep the interest going. In either case, it's certainly an exciting six weeks of cricket to look forward to.

Aakash Chopra opened the batting for India in 10 Tests, forming an all-Delhi combination with Virender Sehwag during India's tour of Australia in 2003-04. He also made his mark as an exceptional bat-pad fielder. He writes columns for the Hindustan Times and Cricinfo. He recently wrote Beyond the Blues, out in December, his season diary for Delhi's 2007-08 championship season.