The focus of the Twenty20 Cup's Finals Day has primarily been entertainment - but since the competition was launched in 2003, the Twenty20 world has changed.

With riches now on offer from the Indian franchise leagues, the Champions League and (more importantly for the England-qualified players) Sir Allen Stanford, 2008's showpiece day at Hampshire's Rose Bowl ground on Saturday had more of the look of an extended audition.

On a day when county mascots participated in a "dance-off" as well as the usual race, the innings of the day came from Middlesex's Owais Shah, a regular in the England one-day side, whose stunning 75 in the final overshadowed two brutal knocks by team-mate Tyron Henderson, a non-English-qualified "Kolpak" player - while there were still plenty of homegrown cricketers keen to prove their credentials in the shortest form of the game. 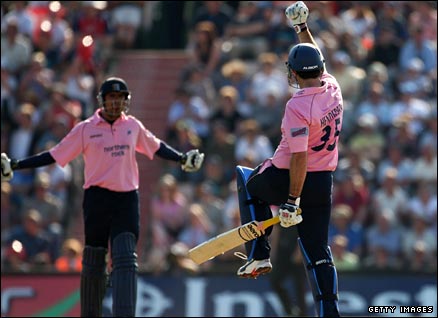 As soon as the curtain rose on the first semi-final, we had Rob Key, eager to prove his England days are not behind him after being named in this summer's Performance squad, opening for Kent with the exciting young talent of Joe Denly, who has played for England Lions this year and has the potential to go one step further.

Having added 58 together in their semi-final, Denly and Key went even further in the final, putting on 89 to give the defending champions a platform to challenge Middlesex's total.

Shah had been content to play a supporting role to Henderson in the second semi-final, but cut loose himself after Henderson fell for 44 in the final, smashing five sixes including three in succession off James Tredwell - helping Middlesex claim the highest ever score in a Twenty20 Cup final.

But a thrilling final was just reward for the loyalty of the Rose Bowl crowd. The ground took a while to fill up during the first semi-final - although having only qualified for finals day at four days' notice, you can hardly blame the Durham fans if the long journey brought them to the south coast in time for their team's game rather than the start of the day.

However, there was hardly a spare seat to be had for either the second semi or the final - and the majority of the defeated semi-finalists' supporters appeared to have stayed for the final. Someone who was certainly there for the whole day was Harry Potter actor Daniel Radcliffe - who watched the last couple of overs of the final from the Kent dug-out!

On one of the hottest days of the year, the three games were played in an electric but friendly atmosphere which contrasted sharply with that on Headingley's Western Terrace during last week's Test match. Shah's big hitting earned him a standing ovation from his own fans, opponents and neutrals alike when he finally departed - as well as earning him a plane ticket to Antigua.

Meanwhile, with the England wicketkeeping position under scrutiny as intense as ever, Essex's James Foster was red-hot behind the stumps, outshining fellow England discard Geraint Jones - national selector Geoff Miller, here to announce the squad for the third Test against South Africa, cannot fail to have been impressed by Foster's glovework.

In typical Twenty20 style, there were also some entertaining cameos throughout the day, and some baseball-style blasts over the ropes, notably from South Africa's Justin Kemp in the final - while Martin van Jaarsveld's batting stance, with the willow held aloft, would not be out of place at Yankee Stadium. Injured Middlesex captain Ed Smith, author of a book on baseball, would have been impressed.

Fielding played an important part, as Kent caught the eye with three run-outs and a couple of smart catches in the first semi-final, including a superb effort from Key to dismiss the dangerous Graham Napier - a huge turning point in the Essex innings.

Napier's six-hitting feats earlier in the competition had seen his name mentioned tentatively in connection with the Stanford game, although there was a sense of anti-climax when he trudged off after scoring just three runs and talk of an England call-up faded somewhat.

Spin is an under-rated commodity in Twenty20, and the wily old warhorse Shaun Udal marked his return to his old ground with a miserly 1-18 from his four overs against Durham and 1-21 against Kent, bowling well in tandem with India's Murali Kartik, while Kent also benefited from a clever spell of containment in their semi-final by off-spinner Tredwell, who toured New Zealand with England earlier this year but carried the drinks for the entire ODI series. However, he lasted just two overs in the final after being savaged at the hands of Shah.

Among the pace bowlers, the newly-recalled Steve Harmison was despatched to the four corners of the Rose Bowl by Henderson, who smashed seven sixes in a blistering 59 not out from 21 balls in the second semi-final. His fellow Durham seamer Liam Plunkett struggled for line and length and on this evidence, an England recall is a long way off. But Tim Murtagh did his chances of crossing the England radar in the future no harm at all, with some accurate seam bowling.

Of the other England probables, possibles and tried-and-discardeds on show, Essex all-rounder Ravi Bopara has been a regular in the ODI side for the last year or so - and as if to prove that he is under-bowled by England, picked up three wickets before adding 78 for the first wicket with Mark Pettini. Paul Collingwood, still England's ODI captain despite serving a suspension for poor over-rates, made a run-a-ball 35 before holing out when trying to accelerate against Udal.

Meanwhile, Middlesex captain Ed Joyce (who has the rare feat of an ODI century against Australia at the SCG on his CV, but has seemingly fallen from favour with England) made a fluent 41 in the semi-final, setting the table for Henderson to feast later in the innings. However, he was almost made to rue dropping Kemp at long-off while the powerful South African "Kolpakker" aimed sixes and fours into the night sky.

With a one-day series and a Twenty20 international against South Africa on the cards before the Stanford adventure, it remains to be seen if England again opt for Twenty20 "specialists" in Antigua, after the selection of Darren Maddy, Jeremy Snape, Chris Schofield and James Kirtley did not meet with total success in last year's World Twenty20.

But if entertainment was the aim, the crowd should have gone home happily entertained. And isn't that the idea? 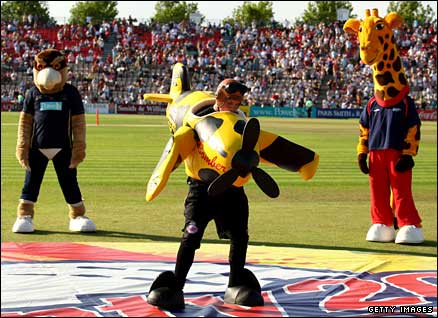