“One of the biggest blasts of hot air, which I’ve been hearing ever since I was an adolescent, is the idea that top level sport is a good place to learn and develop ethical and moral values.

"It never was. Ambition, the desire to be a hero and to make lots of money are usually much stronger.”

So wrote 1970 Brazil great Tostao in Sunday’s version of his always interesting column, a twice weekly space where football is analysed by someone of great knowledge and intelligence who loves the game but is even more fascinated by the subtleties and contradictions of the human being.

“There are exceptions,” he continues, before plunging into depressing accounts of athletes doping themselves to gain an illegal advantage. 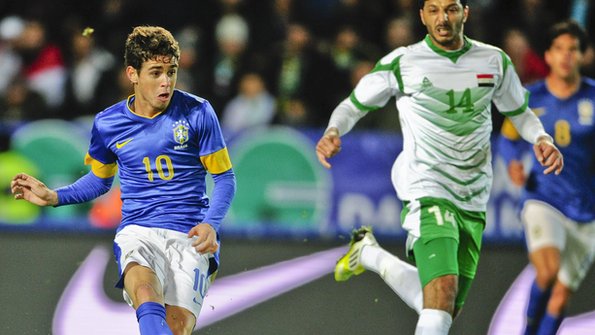 Brazilian midfielder Oscar has been in impressive form for club and country. Photo: Getty

One of those exceptions – a moment when high level sport both teaches and disseminates a powerful ethical message – took place just a few yards away from him.

I refer to the post-match embrace between Pele and Bobby Moore after Brazil had beaten England 1-0 in the 1970 World Cup.

It is a wonderful image, and a highly fitting front cover for one of the all time great football books, ‘The Ball is Round,’ by David Goldblatt.

On one level, the photo stands as a symbol for the hundreds of thousands of cross-border friendships which have been nurtured by the global game.

On another, it shows how the previous 90 minutes had strengthened the bond of mutual respect between two of the giants of the game, a recognition that the skill of one had brought the very best out of the other.

My thoughts turned to that classic photo because this is a time for reflection. On Wednesday Brazil play what by their account is their 1,000th senior international match. A local journalist phoned me in the week asking me to choose a favourite – and that meeting with England in 1970 instantly came to mind.

On a baking afternoon in Guadalajara, it was not only Pele and Moore who re-enforced a mutual respect. The same thing happened between the two teams. England travelled to Mexico with their status as world champions called into question by many in Latin America.

The match against Brazil showed everyone that Alf Ramsey’s team had many virtues – not only in defence but also in mature, composed possession. Brazil were pinned back for long periods. Their players and coach are quick to acknowledge that the game could easily have ended in a draw, or even a win for England.

Brazil, meanwhile, gave definitive proof that they had overcome the hiccup of first round elimination in 1966, and that they had a generation worthy of comparison with their 1958 side. Their opening game in the 1970 campaign, a 4-1 win over Czechoslovakia, was a bit more shaky than the scoreline might suggest. Beating England showed they meant business.

Although it was only a group game, and both sides made it through to the quarter-finals, the outcome was also of great significance. Jairzinho, who scored the goal, is adamant that this was the moment when Brazil won the World Cup.

Topping the group meant that Brazil stayed in Guadalajara, where they polished off Peru and Uruguay on their way to the final. England, meanwhile, fell to West Germany – but only after taking them into extra time and tiring them.

The Germans then did the same thing to Italy in the semi-final – it was another extra-time thriller. So when Brazil met Italy in the final they were well aware that their opponents were likely to fade before the end of the game. Italy actually had more shots in the first half, which finished level at 1-1.

Brazil turned the screw after the interval and strolled home by a 4-1 margin to win the World Cup for the third time. But the key moment in the campaign came two weeks earlier with the victory over England.

For its significance, its quality and the unforgettable image of Pele and Bobby Moore at the end, that match is my personal pick from the treasure trove of almost a century of Brazil games. Readers are invited to use the comments section to write about their own choices.

It might be more fitting if the 1,000-game milestone was reached in an official competition. But in the circumstances Wednesday’s friendly against Colombia in New Jersey is interesting enough.

The Colombians have been looking very good in World Cup qualification. With attacking midfielder James Rodriguez flowering and Macnelly Torres a good, old fashioned playmaker, Jose Pekerman’s side are at last getting full value from centre forward Radamel Falcao Garcia. And the bench is full of dangerous attacking options.

The defence is more of a worry, with a generation of centre-backs growing old together. It will be fascinating to see how they stand up to the test of facing Neymar, Lucas, Kaka and Oscar.

And on the Brazil side, will the idea of playing without a centre-forward be maintained, and if so will it work as well as in last month’s matches? In a tight game, do the central midfield duo of Ramires and Paulinho have the range of passing to match their lung power?

And might centre-back Leandro Castan prove more than just an improvisation at left back, shoring up the weak side of Brazil’s defence?

Wednesday’s game is unlikely to hit the heights of Guadalajara in 1970. But for Brazil it is a potentially interesting step towards hosting the next World Cup, when hopefully their participation will once again send some unforgettable images around the globe.

Comments on the piece in the space provided. Questions on South American football to vickerycolumn@hotmail.com, and I’ll pick out a couple for next week.
From last week’s postbag;

Q. I’m a Sao Paulo fan - despite the glorious past the team seems to have had mostly ups and downs the past two seasons. I’m not really looking forward to seeing Lucas depart for France and I am not at all sure that new signing Paulo Henrique Ganso will be able to provide the star power. What are your thoughts regarding the long term possibilities for this once "future super star" who has struggled with his form and with his emotional motivation?
Carlos Wysling

A. I’m also disappointed that Lucas is going. I suppose the money from PSG was too good to turn down, but I would have preferred to see him stay another year and play the Libertadores. Ganso is by no means a straight replacement, and, as you say, is now something of an enigma, wandering around on dodgy knees. But even if he struggles, Sao Paulo can still can count on the excellent and underrated Jadson.

But the big improvement in the second half of the season has been in defence. Two players are key in this – new signing Rafael Toloi, a no nonsense centre back who really should have gone to the Olympics. And the return from injury of central midfielder Wellington, whose dynamism is important. If the defensive unit keeps working well then it will be far easier to slot Ganso into the side.

Tim Vickery is a regular guest on BBC Radio 5 live’s World Football Phone-in, which is available to download as a podcast.