Brazil look on target without a number nine

"I was too busy scoring goals to learn how to play football," says Dario, a legendary figure in Brazilian football from the 1960s and 70s. A charismatic character, Dario invents phrases as easily as he used to put the ball in the net. "There's no such thing as an ugly goal," he once said. "Ugly is not scoring goals."

If both remarks sound a little defensive, it is easy enough to explain. Brazilian football has been gifted with so many artists - players capable of snapping their marker in two with a sway of the hips, wrong-footing the keeper and then sliding home - that a little prejudice sometimes persists about the centre forward. The target man number nine whose game is restricted to getting the ball over the line can be seen, at best, as the exponent of a minor art.

Since the Olympics, Brazil coach Mano Menezes has been working along the lines of doing away with this creature in his starting line-up. There was no specialist centre forward in the team that beat China last month, nor in the side that would have played three weeks ago in the abandoned match against Argentina.

The absence of a number nine opens space for an extra player to elaborate the moves. When it works it is very easy on the eye - the whole world drools at the pass-and-move game of Barcelona. But there are very few teams capable of playing their way through the opposition with the exuberant ease of Lionel Messi and company. And Leandro Damiao, Brazil's centre forward, seems to be developing well. He was top-scorer at London 2012.

At the time he was named in Brazil's squad for the recent friendlies against Iraq and Japan, Kaka had not even played a competitive game this season. He had seemed entirely surplus to requirements at Real Madrid, who would have loved to unload him in order to reduce their wage bill. The problem was that Kaka's recent history of knee and groin injuries made it unlikely anyone would come in with a big-money bid. 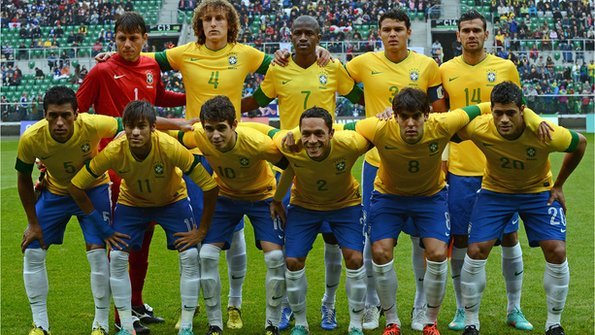 Brazil impressed in their recent friendly wins over Iraq and Japan Photo: Getty

How on earth, I thought, could a player in this situation be ready to play for Brazil in the short term, or capable of a significant contribution in the long term?

There is, of course, no way of knowing for sure that Kaka will have enough gas in the tank to make it all the way to a fourth World Cup in 2014. But after his displays in the two friendlies against Asian opponents there can be little doubt he was ready. Announcing his recall, Menezes had said the player was looking good in training - information confirmed by the way the veteran was able to make space against his marker to set up team-mates or shoot at goal.

And just as my scepticism about Kaka proved misplaced, so were my doubts about the formation. In fact the two are intrinsically linked. Kaka was that piece in the jigsaw that completed the side with no number nine.

The new system is something like a 4-2-4-0. Nominally the strikers, Hulk and Neymar, are thrown wide - on the right and left respectively - so both can cut in onto their stronger foot. They can also track back - especially Hulk, whose physical capacity makes him especially useful in this respect.

In front of the back four are two all-round midfielders. Ramires is the more defensive of the two, with Paulinho looking to break forward, although the roles can be reversed. And in front of them are Oscar and Kaka. The Chelsea youngster is more the midfielder, proficient at dropping back to set up the play. The Real Madrid veteran is the support striker, bringing his pace and directness to bear in the final 30 metres. Both, though, are equally likely to pop up in the centre forward position and shoot at goal.

Oscar and Kaka were both on target twice as Brazil ran up 10 goals in the two games. Iraq were swatted away 6-0. Japan were much more of a test - they had just won away against France, and they had their moments against Brazil when they met in Poland last Tuesday. Brazil's 4-0 win, then, was a remarkable scoreline.

Tostao, himself an improvised centre forward in the Mexico '70 team, was impressed. "For the first time," he wrote after the Japan game, "I'm hopeful Brazil will have a great team in the [2014] World Cup. The four front players are both midfielders and strikers. All four give passes and score goals. This is the way forward."

He recognises, however, that Japan's high defensive line and adventurous approach made things easier, predicting greater difficulties "against stronger opponents and also against average sides who mark well, sit deep and counter-attack" - the very type of opposition Brazil are sure to encounter on home ground in 2014.

Brazil will trust that 4-2-4-0 can keep them defensively compact. It was the system Corinthians used this year to win the Copa Libertadores with an outstanding defensive record - just four goals conceded in 14 games.

There is a problem, though, with the left side of Brazil's defence. For a start, it is less protected - Hulk works back on the right, but Neymar on the left is usually the most advanced player and the target for the quick ball forward. At left-back, Marcelo is far happier pushing forward than defending - even Iraq were able to get into the space behind him. Injury meant he was replaced by Leandro Castan, a centre-back, for the Japan game, which could be worth repeating. Even then the positional sense of left-sided centre back David Luiz can be exposed.

There are, then, some interesting doubts. Can Brazil improve their defending down the left? Will Kaka retain form and fitness? Is the system with no centre forward the best way of playing against all opponents? But doubt is always necessary. My scepticism clearly was not.

Comments on the piece below. Send questions on South American football to vickerycolumn@hotmail.com, and I'll pick out a couple for next week.

Q: The future of Peruvian football is looking increasingly bright in my opinion, particularly in the offensive side of things, with Alianza Lima wielding a crop of very watchable youngsters - Junior Ponce, Jorge Bazan and Yordy Reyna to name few. Will this wave of exciting talent hold the key to elevating Peru into the elite footballing nations in South America?
Dominic Brady

A: There is certainly an interesting crop coming through - at Alianza, I've also been impressed with Jose Canova at centre-back. And there's an excellent group coming through at Universitario as well. But the financial problems of these clubs are forcing (and will continue to force) so many of these players into premature moves. So it's way too early to know whether this generation will prove Peru's footballing salvation.

Q: I am a Philadelphia Union supporter here in the United States. Our captain, centre-back Carlos Valdes, has been featuring for the Colombia national team recently. Have you had a chance to see him play and, if so, what are your impressions of him?
Greg Orlandini

A: Saw plenty of him on the way up - he was part of an excellent Colombia Under-20 squad in 2005, and I remember him captaining America of Cali at a very young age a few years back. To be honest, the impression I've always had of him is of a player who stands out more for his strength of personality and leadership qualities than for his ability. Back in 2005 I was far more impressed with another centre-back in that Colombia side, Cristian Zapata, now of Milan.

I'd be interested to know what US fans think of Valdes and his progress. Colombia urgently need a change of generation in the centre-back positions, and Valdes and Zapata would seem to be the best solutions around at the moment.