Argentina & Uruguay back on road to Brazil

The so-called 'super-classic of the Americas' descended into the farce that it probably deserved last week.

Argentina against Brazil is one of football's greatest rivalries.

But the occasion and its tradition are undermined when the matches are staged outside Fifa dates using only domestically based players - which in current conditions pits an understrength Brazil team against, at best, a C-strength Argentina side.

The idea might be more bearable without the hard sell - this is clearly not the 'super-classic' of anything at all. It looks more like a "product" cynically cooked up to fill TV schedules. 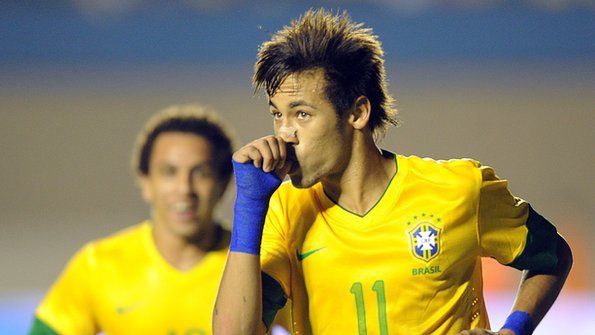 And last Wednesday it did not look like anything at all.

Floodlight failure struck just as the teams were about to kick off in the small Argentine city of Resistencia. After more than an hour of awkward hanging around came word that the game would not take place.

No matter. The real 'super-classic' gets under way once more this Friday, with the ninth round of South America's World Cup qualification campaign.

I have often written in tribute of this marathon tournament, which is always gripping, filled with relevance and rivalry.

And there is another aspect. Teams are not only trying to qualify - they are also seeking to construct a side capable of doing well in the World Cup.

Over the two-year course of the campaign there is plenty of time for sides to find a blend - or for teams to come apart.

Friday's match between Argentina and Uruguay becomes all the more interesting when seen through this prism.

Argentina top the qualification table, and should have few problems booking their place in Brazil. But coach Alejandro Sabella has not had things all his own way. He was thrown into the deep end, appointed shortly before the campaign started with little time to prepare.

His side got off to a poor start, losing to Venezuela and drawing at home to Bolivia.
This is perhaps not surprising. One of the golden rules of football is that the stars shine when the collective balance of the team is right.

A frequent problem for coaches of Argentina and Brazil is the sheer number of options available to them. When Brazil flirted with disaster in the 2002 World Cup qualifiers they used 62 players.

A disappointing performance leads to pressure for change, which in turn makes continuity - and confidence - so much harder to achieve.

It took Sabella time to feel his way forward and get full value from Argentina's wealth of attacking riches. Still questions remain.

In a perfect world he would love to be able to pick Lionel Messi alongside Sergio Aguero - the pair have a wonderful understanding - and Gonzalo Higuain to supply the target man option. But can he afford to select both Higuain and Aguero against the strongest opponents?

Does this leave him light in midfield? And does Angel Di Maria have the all-round game to play as a genuine midfielder? He gave away a silly penalty away to Peru last month.It cost nothing because Sergio Romero saved the spot kick. Against awkward opponents Argentina came away with a 1-1 draw in their only match over the past year where Messi did not shine - which may not have displeased Sabella too much.

It meant that his defence had to raise the game - and if Sabella is over-blessed with attacking resources, the same is not necessarily so at the other end of the field. The defensive unit is where Sabella has most made changes.

He tried out a back three a year ago in that defeat by Venezuela - and with more time on the training field it is a system to which he may return.

He used it once more in the first leg of the so-called "super-classic" and would have used it again last Wednesday. Indeed, one wag in Argentina suggested that Sabella might take advantage of the blackout to sneak another defender onto the pitch.

In the World Cup qualifiers, though, for the time being a back four would seem to be the favoured formation. It performed well enough against the Peruvians. And here come Uruguay's trident of Edinson Cavani, Luis Suarez and Diego Forlan to test the Argentine defence this Friday.

So far in this campaign Argentina have picked 31 players. Everyone has used between 28 and 35 - with the glaring exception of Uruguay, who have only needed 18.
The Uruguayans have their group. Coach Oscar Washington Tabarez began constructing it in the 2007 Copa America.

At the time they were a relatively inexperienced team, something which hampered their progress through the 2010 World Cup qualifiers. After grabbing the last place available in South Africa, everything came together and for a two-year spell they were the best side in South America. It is harder to make that claim now; last month's results (a 4-0 loss away to Colombia and a 1-1 draw at home to Ecuador) dropped Uruguay down to fourth in the table.

That same group have now been together for more than five years - a long time in football. Renewal time is coming - a tough moment for any coach. Many can build a side - far fewer can break it up and reconstruct.

The original plan was presumably to keep the bulk of this group together until the next World Cup. Results might dictate that changes will have to come sooner. Tabarez has his favourites. There are players such as midfielder Sebastian Eguren and centre forward Sebastian Abreu who rarely feature.

But their experience and strength of character make them important leaders in the dressing room. These and other veterans may have to be jettisoned and space made for a new generation - which makes all the more frustrating the failure of Uruguay's Under-23s in the London Olympics.

So do Uruguay need wholesale changes, and can Argentina defend? Friday's game should shed some light - and promises to be much more illuminating than the farcical events at Resistencia last Wednesday.

A few months back, Pele said that only when Messi has scored 1283 goals can we talk about him being better than Pele. That's a huge number of goals, and in the modern game, no-one is ever realistically going to score that many.

Once you start to look at where Pele scored his goals, a large proportion of them came in friendlies and in the Brazilian regional championships. Messi has scored most of his in La Liga and the Champions League, which I would imagine is a higher level of competition.

I know it's very difficult to compare players of different eras, but just how competitive are Pele's goals from his friendlies and regional championships? 1283 goals at any level is an extraordinary achievement, but to say that Messi has to score the same number in La Liga and the Champions League is surely a very skewed comparison.
Ben Abramson

A lot of the friendlies were more competitive than you might imagine - opponents wanted to show they could play, too. And the Sao Paulo state championship was much, much stronger than it is today. Even so, this line of argument does not show Pele at his best.
The undoubted genius of Pele does not lie in statistical accumulation - especially when some of those goals were scored in the Army. It lies in unforgettable and influential performances in big games.

Pele managed that over a long period of time. Messi is now doing it - and if he can maintain his form over a period of, say, five more years, then he has to be in the fight. At that stage we might be able to argue that Pele was more complete - two footed, exceptional in the air, etc. But if Messi can keep shining in the Champions League - and also have a good World Cup - then he can at least level it up.

In order to play all those friendlies Pele missed out on some competitive stuff. Santos ducked out of the Copa Libertadores early. I often wonder how global club football might have developed had Santos stayed in the Libertadores - it might have turned the annual game between the champions of Europe and South America into one of the highpoints of everyone's calendar.