Uruguay have cause for World Cup concern

World Cup qualification resumes in South America this Friday, with a question mark hanging over the team which have been the continent's form side over the past two years. Might the London Olympics mark an unwelcome turning point for Uruguay?

On the face of it there should be no cause for alarm. World Cup semi-finalists in 2010, Copa America champions last year, Uruguay's senior side have gone 18 games without defeat. They have made a solid start to the 2014 qualifiers. Leaders Chile sit out Friday's round, where a win for Uruguay would take them to the top of the table.

But from certain angles, in the light of what happened in the Olympics, the glass does not look quite so full. Part of this comes from the failure of the youngsters to take their Olympic opportunity. Uruguay's senior side is ageing. Some players will need replacing - or at the very least the emergence of options - before the next World Cup. But, eliminated in the group stage, the Under-23s had an appalling tournament. No reputations were enhanced.

And there is a more immediate concern. With Luis Suarez and Edinson Cavani drafted in as over-age players, their Olympic goal power was taken for granted. But it never materialised. Having talented strikers is one thing, getting them to work together is another. It requires understanding, a willingness to sacrifice and a large dose of intelligence. The impression left by the Olympics is that, to get the best out of their strike force, Uruguay remain dependent on Diego Forlan, with his leadership, technical excellence and ability to read the game.

This is a key issue because Uruguay are not a possession-based side -their central midfield is packed with aggressive ball winners. In all their World Cup games two years ago their opponents had more of the ball - but Uruguay had more shots. Having less possession means there is less margin for error when the team wins the ball. In the absence of Forlan there was little clarity in Uruguay's Olympic attack.

The problem is that at the age of 33 Forlan is showing signs of decline. He had an unhappy, injury-hit season in Italy with Inter Milan, and has made an uncertain start with Internacional in Brazil. His first goals for his new club finally came on Sunday, when in the 4-1 win over Flamengo he looked like a class act once more. But will he still be able to hit the heights for the next two years, and if not, can he be replaced? Southampton's new signing Gaston Ramirez has been groomed for the role, but has consistently looked off the pace when given a start in the senior side - and for all his left-footed wizardry from set-pieces, the Olympics did nothing to alter this impression. 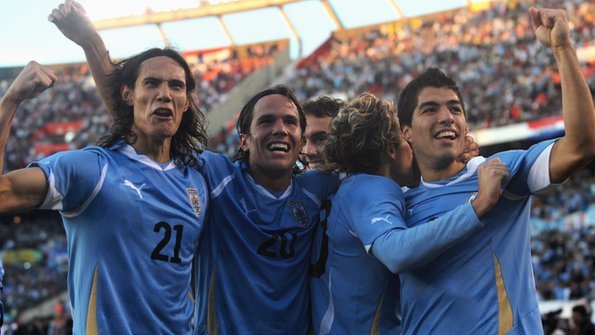 True, Forlan's absence was hardly felt when he missed one of Uruguay's World Cup qualifiers - last November's 4-0 home win over Chile. That, though, was one of those days when Luis Suarez could do no wrong. He scored all four in a scintillating individual performance.

Suarez, though, is suspended from Friday's match. And if victory will take Uruguay top of the table, it is highly likely that defeat will send them down to fourth place, the heart of the qualification dogfight. And given the fact that four of Uruguay's first five games have been at home, there are plenty of tricky away fixtures ahead.

Few are trickier than the one in the sweltering afternoon heat of Barranquilla, where Uruguay travel to take on Colombia on Friday.

This is a renewal of what has become an intense rivalry. In the last three qualification campaigns Uruguay have managed to sneak their way into a fifth-placed finish - the play-off slot. All three times Colombia were narrowly squeezed out. In the 2010 and 2006 qualifiers Uruguay finished just a point ahead - both times as a result of stirring late wins at home to the Colombians in the closing stages of the campaign. In the 2002 qualifiers it was even closer as they finished level on points, with Uruguay's goal difference better by one.

Colombia, then, will take the field on Friday with a dual objective - add to their own points tally and stop Uruguay adding to theirs. After an uneven start, Colombia sacked their coach only three games into the campaign, former international midfielder Lionel Alvarez replaced by ex-Argentina boss Jose Pekerman.

A significant part of the challenge faced by Pekerman is the need to get the best out of striker Radamel Falcao Garcia, destroyer of Chelsea in Friday's Super Cup. Unsuited to Colombia's slower build-up, Falcao has very rarely shown his club form for his country. Uncomfortable linking the play with his back to goal, he is at his happiest when quick service gives him an early sight of the target.

Pekerman can place some trust in the emerging, exciting talent of Porto's James Rodriguez as a possible supply line for his star centre forward. But it is also intriguing that he has chosen to recall playmaker Macnelly Torres, one of the best threaders of a through pass in South American football. If Torres gets a game, and if he can strike up an instant rapport with Falcao, then Uruguay will be in for an exceptionally warm afternoon.

The Uruguayans, though, are often at their most dangerous with their backs to the wall, and Forlan and Cavani will take heart from the absence through suspension of both Colombia's first choice centre-backs, Mario Yepes and Arquivaldo Mosquera.

Whatever happens, Colombia against Uruguay in Barranquilla promises to be a wonderful way to kick-start the second year of the most competitive World Cup qualifiers on the planet.

I am an academy coach in England, fascinated by youth development in football. In England I have been on many coaching courses recently where course leaders have used Lionel Messi as the benchmark and have argued that "special player skills" can be taught and learned. This often results in more complex drills with the coach talking even more during sessions at younger age groups (U7, U8 groups).

When I research about players such as Aguero, Suarez and Messi, and how they learned the game as young players, they often state that their football education took place in local games on parks and in the street. If Messi learned to play in unstructured games, I cannot understand why more academies do not try to reproduce that environment. I get the feeling the academy system in England is far too structured, with coaches focusing far too much on session plans and winning games and less about letting the players express themselves. So if Messi learned how to play on the street by playing unstructured games, why do you think so many English coaches continue with this drill culture at younger age groups? And even though street football may be finished in England, do you think that by recreating a similar "street football" environment within the academy system, players will be less restricted and more creative players will develop?
Adam Kirkpatrick

I found this so fascinating I decided to quote it at length and throw it out for debate. I am no pedagogue and I'm a long way from the English academy system, but everything you say makes sense to me.

I love Jorge Valdano's definition of Messi - a perfect synthesis of unstructured Argentine street football and the Barcelona academy. The latter has given him plenty - good coaching is a wonderful thing - but for what it's worth I'm struggling to believe that what the former gave him can be taught. That is spontaneous, full of solutions - improvised and worked out instinctively. I think we're all the poorer for the decline of old-fashioned street football. I'd love to see a debate with a range of views on the best way forward.