On Wednesday Neymar helped Brazil to a morale-boosting 3-0 win away to Sweden. The next evening he was back in action on the other side of the Atlantic, in Florianopolis in the south of Brazil, where he played the starring role as Santos came from behind to seal a 3-1 victory against Figueirense.

The punishing schedule is reflected by a glance at the league table. The Brazilian Championship is approaching the halfway stage, but Neymar has hardly figured. He has been away on international duty, and Santos have struggled in his absence.

A defeat last Thursday would have left them just one point clear of the relegation places - and it looked a distinct possibility at half-time, when bottom of the table Figueirense were a goal up. Neymar put a stop to the panic with a superb solo equaliser, and laid on the clinching third goal. He also added another assist on Sunday as Santos came from behind once more to beat old rivals Corinthians. Suddenly the league table does not look so frightening.

But does Neymar still need Santos?

It is an interesting question.

Over the last three years the 20-year-old has climbed almost every mountain that exists in South American club football. He is a magnificent talent, with the balance and two footed trickery to draw comparison with a young George Best. But he is by no means the finished article. Nor will he be until he learns how to operate in reduced space. 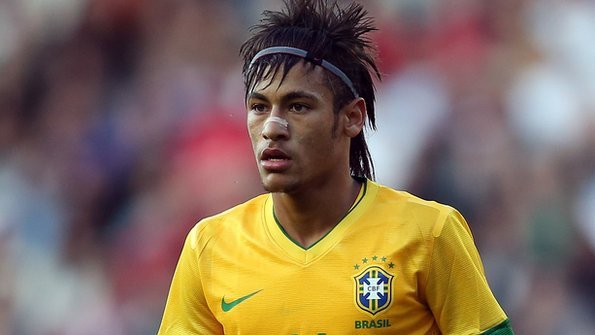 The Olympic final against Mexico was another in a recent sequence of big matches where Neymar has been nullified by canny defences closing him down. This is not necessarily a cause for alarm. Learning to overcome such challenges is a normal part of a young player's development. But in order to learn he must come up against his demon on a regular basis, and here lies the problem.

Brazilian club defences tend to lie very deep, meaning there is space on the field for the likes of Neymar to pick up possession and build up acceleration. Referees are quick to blow for fouls and there is a cultural tolerance of diving.

Figueirense last Thursday are perhaps an unfair example - they are not bottom of the table for nothing - but their defending was so appallingly bad that the thought that this was something of a hollow triumph may even have flickered across Neymar's mind. And there could be even worse to come. Those two quick victories have lifted Santos up the table. But they still stand 11 points behind the team in fourth place, the last qualifier for next year's Copa Libertadores, South America's Champions League. Should they fail to make up the gap then Santos will be looking at a very melancholy opening few months of 2013.

Until the next national championship gets under way at the end of May the only stages on which Neymar will feature will be the opening rounds of the Brazilian Cup and the dreadful Sao Paulo State Championship - competitions which have very little to contribute to his development.

This is the risk of staying in Brazil - that of remaining in a comfort zone. Other risks are available, some of which are now being faced by Oscar, who has established such an interesting international partnership with Neymar.

Sunday's 2-0 win over Wigan got Oscar's Chelsea career off to a winning start. He came off the bench in the second half, and while he will be happy with the win bonus he has already seen that there is no guarantee of a place in the starting line-up.

The headlines have gone to Eden Hazard. Juan Mata is still there of course, and Marko Marin has been drafted in. Competition for attacking midfield places will be stiff, and being on international duty prevented Oscar from bedding in to his new surroundings with a proper pre-season.

Oscar is a wonderfully talented, inventive player, versatile and stronger then he looks. But there will inevitably be a period of adaptation, and the risk exists that too much time on the bench might blunt his edge and rob his career of momentum. Joining Chelsea is the move of a confident young man. Oscar has the game to back up his confidence - just as well, since he is not scaling Everest the easy way.

There are exceptions, but most of the Brazilians who have done exceptionally well in Europe have tended to find their feet with smaller clubs before going on to shine with the giants. As the current continental champions, Chelsea have to be considered a giant - and the aim to add more style to their success makes Stamford Bridge a demanding destination.

Is Oscar taking on too much too soon? Is Neymar not taking on enough? The contrasting risks the pair are running have a great deal to do with the improved economic scenario of the Brazilian game. Money exists to hold on to the stars for longer - which means that by the time they make the move, their prestige and price bracket puts them out of the range of all but the biggest clubs.

The Oscar-Neymar partnership looks to be of fundamental importance to Brazil's World Cup campaign - all the more so if Wednesday's evidence is to be believed and 4-2-3-1 has now given way to 4-3-2-1. The pair have freedom to flit across the attacking line in support of the centre forward. It will be fascinating to see how Neymar and Oscar deal with their respective risks and challenges on the countdown to 2014.

Following what looked like a great 3-0 win for Ecuador in New York against a good looking Chile side, do you think it is real possibility of Ecuador mounting a serious challenge for World Cup qualification? Is it possible they could win some key games away from their Quito stronghold this time around?
Andy Morrison

It certainly was a terrific win against Chile, showcasing what Ecuador do best - attack down the flanks. Chile's back three were made for them, with Antonio Valencia imperious down the right and Jefferson Montero a delight down the left. If only his final ball and choice of options were better then Montero could be world class.

Ecuador are fourth in the qualification table at the moment, so they are on course - but they are 100% at home and 0% away. With the threat they carry on the counter attack they should be able to pick up some away points. My doubt, though, is whether they are good enough in both penalty areas.

Just having a look at the Argentine League, what impact would it have if Independiente get relegated?
Edmund Allen

They are in for a long, hard year. On the average points over three years - which determines relegation in Argentina - Independiente are currently bottom of the table. And they have made a bad start to the season - without a win (or even a goal) in the first three games.

But the lesson should be clear. If River Plate can go down, anyone can. Although they seem to have bounced back a bit stronger for the experience, which
might give Independiente fans a tiny crumb of consolation.