Manchester City coach Roberto Mancini was frustrated when his striker Sergio Aguero was called up by Argentina for a friendly against Germany two weeks ago.

And he is exasperated to see Aguero's name in his country's squad for the coming World Cup qualifiers.

The trip to Germany came just a few days before City began their defence of the Premier League title. And Aguero's injury means that he has limited chances of being fit in time to play for his country next month. A journey across the Atlantic is quite possibly not an ideal part of the player's recovery. Mancini's position, then, is totally understandable.

But so too is that of Argentina boss Alejandro Sabella.

His complaint is that of all those in charge of contemporary national teams - the lack of time with his players means that he can hardly function as a coach. He becomes a selector. In the quest to form a cohesive group, any time he can spend with his players has to be utilised.

It hardly matters to Sabella that Aguero is unlikely to be ready for Argentina's next game, at home to Paraguay on 7 September - the player is suspended. But everything will be worthwhile if four days later Aguero is able to come off the bench and make an impact on the tricky tie away to Peru.

That is exactly what Aguero did against Colombia last November.

Injury had kept him out of the first three rounds of the 2014 qualifiers, and Argentina had made a desperate start in his absence. They had lost to Venezuela, drawn at home to Bolivia and were a goal down to Colombia when Aguero was introduced at half time.

It proved a turning point. Aguero's presence opened up space for Lionel Messi. Both were on target as Argentina struck back to win 2-1. Messi has not stopped scoring since. In the next game he weighed in with a hat-trick as Switzerland were beaten 3-1 in a friendly. 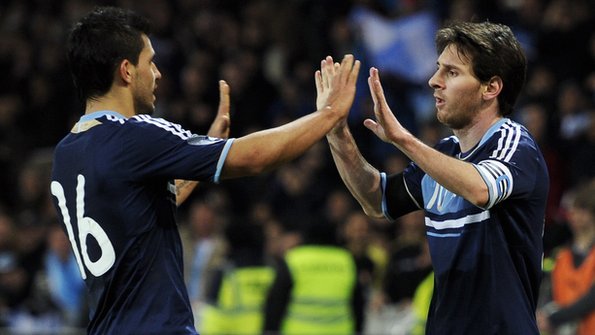 Messi and Aguero were among the scorers as a dangerous Ecuador side were thrashed 4-0 in a World Cup qualifier. Photo: Getty

Messi then added three more in a 4-3 triumph over Brazil, before scoring another (and missing a penalty) in that recent 3-1 win in Germany. So since Aguero's introduction on that hot afternoon in Colombia, Argentina have managed 16 goals in four and a half games, with Messi scoring nine of them. It is little wonder that Sabella wants Aguero around.

When Messi has failed to live up to expectations with the national team it has not been hard to find an explanation - the absence of his Barcelona team-mates. There is no doubt about it - Argentina cannot currently come up with an equivalent to Daniel Alves, the Brazilian attacking right-back whose thrust and threat help create space for Messi when he plays for his club. And although for Argentina Messi is forging a promising relationship with revitalised midfielder Fernando Gago, it is highly unlikely to prove as productive as the Barca link up with Xavi.

The beauty of the combination with Aguero is that it has the potential to outdo anything Messi has ever had with his club. Not with Samuel Eto'o, Zlatan Ibrahimovic or David Villa has Messi combined as naturally as he does with Aguero. The pair shared a room during the 2005 World Youth Cup in Holland. They struck up a friendship, and their understanding translates to the football field.

Against Switzerland last February or in the second half in Germany two weeks ago Messi and Aguero exchanged passes at dazzling speed and bewildering angles. It has perhaps taken Argentina too long to make this relationship the central axis of their attack - and even now the question has not been fully resolved.

A front two of Messi and Aguero lacks the penalty area presence of a traditional centre forward. Gonzalo Higuain can supply this - leaving the problem of fitting all three into a 4-4-2, the system Sabella has chosen as his base formation. The presence of the ultra-attacking Angel Di Maria in the midfield quartet makes the puzzle harder to solve.

At home to Ecuador, Sabella was happy to start with his front trio. Otherwise, either Aguero or Higuain have had to come off the bench. Last time out against Germany Aguero was brought on at half time. It may not have happened had the Germans not already had a man sent off.

It is entirely possible that the option for 4-4-2 is Sabella's way of playing safe during the notoriously difficult qualification campaign. By his own admission he is a pragmatist, willing to change to suit the circumstances. And if the balance of his attack is giving him headaches, the same is surely more true of his defence.

He has gone with a new pair of centre backs, Federico Fernandez and Ezequiel Garay. Neither is particularly quick, and their reluctance to be drawn out wide can open up huge gaps between them and the full-backs. This cost one goal against Germany and could easily have cost more.

One possible response is a back three with Javier Mascherano using his Barcelona experience and dropping into the defensive line. This could even be the explanation for the recall of Fabricio Coloccini - Sabella recently remarked that the Newcastle defender could be used as part of a three-man defence.

It is entirely possible that Alejandro Sabella will not settle on the shape of his World Cup side until a few months before the tournament. Before that, to the deep regret of Roberto Mancini, he has clearly concluded that time together with all of his players is too good an opportunity to be wasted.

I'm a fan of Peruvian centre forward Paolo Guerrero. His hold up play reminds me a bit of Didier Drogba with his willingness to chest a ball down and hold off defenders in traffic. How has he been doing in his first campaign for Corinthians and does he and his fellow Peruvians still have a realistic shot at getting hot and being a factor in South American qualifying?
Aaron Hall

He hasn't done much for Corinthians so far, but it's early days, and I see him as a hugely significant signing - this is a 28-year-old, not a veteran looking to wind down his career with a tropical adventure.

Peru have a lot to do in World Cup qualification. They won their first game but have lost the next four. They have, though, been very unlucky with injuries. If everyone stays fit they have a chance, but they must start picking up points soon. The next two rounds are vital. Peru are at home for both, Venezuela first up and then Argentina. Anything less than four points will leave them a long way off the pace.

What can you tell us about Angelo Henriquez of Universidad de Chile who has just signed for Manchester United?
Shayak Banerjee

An 18-year-old striker of great promise, quick feet, sharp around the box and very mature and calm with his finishing. He has had an interesting year - at the start of 2012 he was playing for the youth team against Universidad de Chile's starting line-up, he impressed the coach so much that he won an instant promotion and he kept on scoring.

He has been on United's radar screen for a couple of years already, so I'm sure they have a very clear idea of what they are getting. The obvious fear is losing momentum by spending too long on the bench, because he's probably too lightweight to make much of an impression on the Premier League at this stage.