Spain's win at Euro 2012 - their third consecutive major tournament win - has sparked off all kinds of comparisons in the bar room debate over the best international team of all time.

Of course, such conversations have a strong subjective component, but it is hard to formulate arguments against the facts - and a fourth consecutive trophy will surely tip the balance in Spain's favour.

But title number four looks set to be the hardest of the lot. It entails doing what no European team has ever done - winning the World Cup on South American soil when the world come to Brazil in 2014.

Worse, it comes at a time when the South Americans, who have always won the trophy when it has been staged on their continent, have an unprecedented degree of strength in depth. This is something the reigning world and European champions should know from experience. 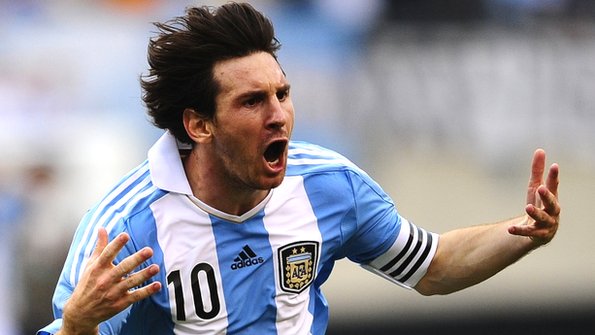 Lionel Messi will look to topple a Spain side that contains many of his Barcelona teammates. Photo: Getty

Spain, of course, have breezed through the knock-out stages of their three victorious tournaments without conceding a single goal. It is worth remembering that in all that time the most difficult, most even game was the 2010 World Cup quarter-final against Paraguay, who even missed a penalty.

Paraguay, though, may well not be in Brazil in two years' time. The agonising progress they made to the final of last year's Copa America was the last hurrah for the team that had pushed Spain all the way. Coach Gerardo Martino resigned, replacement Francisco Arce tried to change too much too soon and was sacked.

Whoever takes over (combative Uruguayan Gerardo Pelusso is the favourite) faces an uphill task.

As does the new coach of Bolivia, still to be named after Gustavo Quinteros resigned last week. Dependent on the extreme altitude of playing in La Paz, Bolivia have surely already dropped too many points at home to be serious contenders for a World Cup place.

Peru have made an even worse start, a bitter disappointment after coming third in the Copa America. They have had an appalling run with injuries. If they can get their dangerous strikers fit they could make up lost ground - and they are at home in both of September's next two rounds. But there is no margin for error - unlike Chile.

With a third of the qualification campaign gone, the Chileans already have half the points they need to book a place. They gave Spain an interesting game in the last World Cup, and an even more interesting one in a friendly in Switzerland last year, when they went two goals up only to lose 3-2 to a dubious injury-time penalty. For all their attacking threat, though, it is hard to imagine Chile finding the defensive solidity to unseat the Spaniards should their paths cross in the next World Cup.

Uruguay are a different matter, combining a hugely talented collection of strikers who work well together with a tough defence, an abrasive midfield and a team well drilled enough to tweak their formation in accordance with the strengths and weaknesses of their opponent.

They have also made a good start to the qualification process - but key components of the side are starting to age and may need replacing by 2014. This is part of the importance of the coming Olympics to the Uruguayans, a subject that I will explore in two weeks' time.

At the other end of the continent, Venezuela are in contention to qualify for the World Cup for the first time. Their progress has been truly amazing. But should they make the World Cup it is hard to see them having enough real quality to trouble Spain and the other major challengers from Europe. Much the same applies to Ecuador, full of powerful options down the flanks, but defensively suspect away from their mountain stronghold of Quito.

But if they can qualify for the first time since 1998, Colombia could give the heavyweights something to worry about. There are problems in their squad - the centre-backs are all ageing together, for example. But there is also the hint of something very interesting. Radamel Falcao is one of the most feared centre-forwards in the game.

To get the best out of him Colombia must give him better service. He struggles with his back to goal, so Colombia need to get behind the opposing defence and play in balls that he can attack. It is for this reason that the emergence of attacking midfielder James Rodriguez is so significant. Versatile, mature, strong on the ball and full of ideas, he looks like being a key piece in the jigsaw now being put together by former Argentina boss Jose Pekerman.

Current Argentina coach Alejandro Sabella is having problems with a jigsaw of his own. Argentina are very much a work in progress, a team looking for a blend and a shape. Sabella confesses that there are problems at both full and centre-back - he could have included goalkeeper as well, because undisputed first choice Sergio Romero can often look untidy.

Federico Fernandez and Ezequiel Garay are still feeling their way as a centre back combination. But there are some positive signs as well. Up front the interplay between Lionel Messi and Sergio Aguero can be dazzling. And in the last World Cup qualifier at home to Ecuador, Fernando Gago served as an excellent supply line for Messi.

Surround the little Barcelona genius with enough of these little partnerships and Sabella is well on the way to putting together a team fit to contend with Spain and anyone else in the World Cup. And he has the advantage of the world's most competitive qualification campaign to help him find the right balance.

This is something Brazil, automatically qualified as hosts, do not have. Coach Mano Menezes has lamented the lack of competitive fixtures in his quest to build a team for 2014 - all of which makes the London Olympics all the more important for him and his country. But that is a topic for next week.

Comments on the piece in the space provided. Questions on South American football to vickerycolumn@hotmail.com and I'll pick out a couple for next week.

Q) I've just moved to Lima in Peru on a teaching contract for two years. I'm keen to get involved with the local football, but have no idea where to start. What is Peruvian football like in general and who are the big, or local teams to follow?
Dafydd Gwyon

A) You arrive in interesting times. On the downside, the league is in deep financial crisis, with most of the clubs, especially the Lima giants, mired in debt. Indeed, a new administrator-type figure has been appointed at a number of clubs in a bid to sort it all out.

On the plus side, first there is a pleasing and very necessary movement of decentralisation. Historically Lima monopolises, but last season Juan Aurich of Chiclayo took the title up north for the first time, and this year Cesar Vallejo from nearby Trujillo are leading the way.

There are also some interesting young players coming through, especially at Universitario in the capital, currently coached by Nolberto Solano, where Polo, Flores and my current favourite Ampuero (a tall, left-footed midfielder with an imperious air) are all worth a look. Universitario (more linked with the elite) and Alianza Lima (mass of the population) are the big two. But the best team in the capital to watch at the moment are Sporting Cristal, who have an impressive collection of attacking talent.

Or, if you want something more offbeat, there's San Martin, a new club whose tiny support base mainly consists of university students.