Olympic football may not be the main event of the Olympic Games but those teams taking part have an excellent opportunity to try things out as they prepare for the next World Cup.

This has rarely been clearer than at Old Trafford on Sunday, when 2014 hosts Brazil were confronted with a problem they will surely meet time and time again in two years' time. Opponents Belarus put 10 men behind the ball and looked to frustrate them, forcing them to pass sideways, hoping that Brazilian frustration would lead to error and then launching the counter-attack.

What made this match especially interesting was that Belarus took the lead, scoring a beautifully worked goal on almost the first occasion they crossed the halfway line. The true test of a team is always when they go a goal down. How would Brazil respond?

In the event they were level just six minutes later - but it took them another forty to get in front. And the three points were not safe until the third goal was scored in stoppage time. A crowd of 66,000 turned up, many of them Brazilians well aware of the importance of Olympic football.

Like many Brazilian national team crowds, after the initial euphoria wore off they went very quiet when things were not going well on the field. That was interspersed with moments of impatience, such as calling for substitutions. This was a fascinating test for the full ninety minutes.

Arguably Brazil made their task harder for themselves by replacing centre forward Leandro Damiao with Alexandre Pato. Damiao had scored one and made one in Thursday's 3-2 win over Egypt, but coach Mano Menezes thought Pato's characteristics were more suited to this game. Throughout his reign, the 4-2-3-1 system has worked better with an out-and-out centre forward and this was surely all the truer against Belarus. 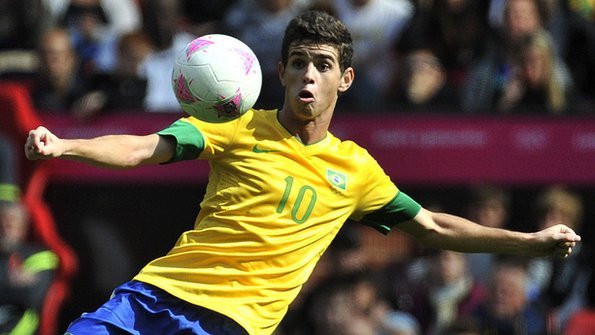 Chelsea signed Brazilian Oscar for a fee understood to be about £25m. Photo: Getty

Against a deep-lying defence there was little space for Pato to show his speed. Meanwhile, the penalty area presence and back to goal game of Damiao were missed - it was harder for the midfielders to make runs beyond the striker and Brazil struggled to get behind the opposing defence.

It was Pato, though, who headed the equaliser, taking advantage of a superb cross curled to the far post by Neymar.

The main reason I travelled to watch the game was to see Neymar at Old Trafford. I have watched him many times over the last three years. With his balance and fluidity, his two-footed unpredictability, his capacity to improvise at speed, it seemed to me that Neymar was reminiscent of a young George Best. The chance to catch the Brazilian at Best's Theatre of Dreams was too good to miss.

There were indeed some memorable moments - an audacious attempt to score from half way stands out. There was also some showboating and some over-elaboration. By no means did he have things his own way but Neymar is one of that select group of players who can play badly wonderfully well. Even when he seems to be struggling he can come up with enough flashes of inspiration to change the course of the game. This was certainly true of Sunday's match.

As well as laying on the equaliser for Pato, he also broke the deadlock with a stunning free-kick whipped across into the far top corner. And he was then instrumental in the moment that sent the crowd home happy - cutting across for the left and wrong-footing the defence with a backheel that set up Chelsea signing Oscar for goal number three.

This could prove to be an exchange of great significance as there are signs of a massively important partnership between the two youngsters. If Neymar supplies the icing, then Oscar promises to provide the cake. The slightly built midfielder is making himself the key to Brazil's possession-based game. Always available to receive the ball, constantly seeking to generate ideas, he is becoming the man who dictates the rhythm of the team's play. He also stands out for his versatility. Oscar is stronger than he looks and capable of pressing the opposition high or of funnelling back to help with the marking. Without him, it is hard to believe that Menezes would have gone with the bold substitution he made when the score was still 1-1 - central midfielder Sandro replaced by playmaker Paulo Henrique Ganso.

Once the Olympics are over, Brazil's coach will have good reason to follow Oscar's progress at Stamford Bridge. The obvious worry is that, with the European champions feverishly rebuilding, the new boy will have his playing time squeezed as he struggles to adapt to life and football in a new country. Too much time on the bench could lead to Oscar losing his edge. He could well be gambling with his international place. The move to Chelsea is the brave choice of a confident young man - but one whose confidence is well grounded in talent and intelligence.

Events on Sunday at Old Trafford could have a bearing on Brazil's quest to win the 2014 World Cup. So now will weekly events at Stamford Bridge.

My team, West Brom have signed Argentina midfielder Claudio Yacob from Racing Club. All I know, from what I've read, is that he's a decent passer of the ball and has been capped a few times for Argentina. What you know about him and how do you think he'll fair in the Premier League?
Chris Adams

I'm not a huge fan, to be honest. Those Argentina caps have to be taken with a pinch of salt. Recently they've had as many as three squads on the go at the same time, so caps have been handed out all over the place. I've been following Yacob since the South American Under-20s in 2007 and I've never been over-impressed. He's neat enough and clearly has a strong personality and leadership qualities. But as a holding midfielder I'm not convinced by his tackling - I think he's off balance and a candidate for cards - or his range of passing.