With his dramatic title-winning goal for Manchester City, Sergio Aguero paid off a fair chunk of his reported £38m transfer fee - some of which filtered down from Atletico Madrid to Independiente in Argentina, the club which produced him.

Producing such a magnificent striker has already done wonders for Independiente's finances. The money they received for selling him to Spain was used to rebuild their entire stadium, the Estadio Libertadores de America - named after South America's equivalent of the Champions League, which they have won a record seven times.

The Copa Libertadores is not only close to the heart of Independiente, it is a huge deal in Argentina nationally.

Supporters in the country have made up special songs about the Libertadores, and the atmosphere in a big Buenos Aires ground during one of those matches is something every fan should experience. 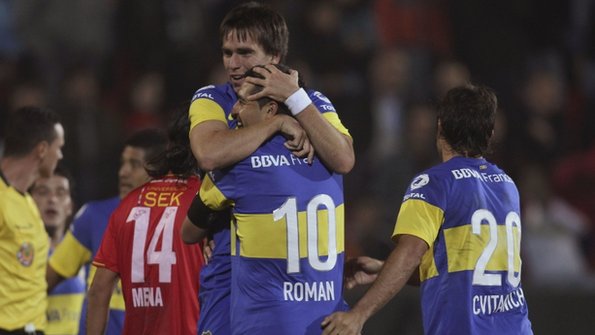 The competition was first played in 1960 - and from 1963 until 1979 there was always a club from Argentina in the final. The country can still boast more wins than anyone else (22, compared to 15 from Brazil, eight from Uruguay and seven from the rest of the continent combined).

However, that domination has started to look very shaky recently.

Over the past 15 years, for example, only two Argentine clubs have reached the final - Estudiantes on one occasion and Boca Juniors on several. In that same time, Brazil has produced 10 different finalists.

Argentina's domination was surely helped by the undeniable fact that, in the past, Brazilian clubs gave the competition a lower priority. In 1966, for example, there was no Brazilian participation, a protest against the expansion from one team per country to two, and there were also boycotts on financial grounds in 1969 and 1970.

Nowadays, though, the competition is a top priority in Brazil as well. And bearing in mind the huge size of the country and the financial gap which has opened up between its clubs and the rest of the continent, it is only to be expected that Brazil has become the leading force in the Libertadores.

Though Santos won the title, last year was not a good one for the Brazilians, who had problems dealing with different tactical approaches. This year, though, normal service has been resumed.

The quarter-finals kick off this week, and Brazil provides four of the last eight, just as it did in 2009 and 2010.

But the decline of Argentine clubs is not only relative to Brazil - performance has also plummeted against everyone else.

River Plate's relegation is symptomatic of the financial and administrative problems faced by even the biggest clubs in the country. For the past three years (and in four of the last five) Argentina has only provided one of the Libertadores quarter-finalists - a bleak statistic given the country's record of success in the competition.

This year, though, there are two, and the pair are the best Argentine football has to offer.
There is Boca Juniors, with all their tradition, back in the competition after a two year absence, and Velez Sarsfield, perhaps the best run club in the country, who have made huge strides in recent years and were unlucky to be knocked out in last year's semi-final.

Both Boca and Velez are more solid and functional than inspirational - a point made all too emphatically by the dreary 0-0 draw they fought out on Sunday in the domestic championship.

This week, though, they are on the same side, both taking on Brazilian opposition in a veritable battle for the soul of the Libertadores. Velez host Santos in Thursday's home leg, while Boca are at home to Fluminense.

As soon as coach Julio Cesar Falcioni took over at the start of last year, Boca were guaranteed to be interesting. Falcioni does not have the habit of picking an old fashioned number 10, and at Boca Juan Roman Riquelme is king.

At first, the coach struggled to accommodate Riquelme plus two strikers and still retain defensive consistency. Things improved in the middle of the year when lumbering centre forward Martin Palermo retired.

Falcioni could then operate with two mobile strikers, and seek to bring one of them behind the line of the ball when possession was lost. He built a solid side, one permanently seeking to defend itself against the opposing counter-attack, and was rewarded with an excellent defensive record as Boca won the last domestic title.

But it has not all been plain sailing.

Dealing with Riquelme is seldom easy, and he was said to be especially unhappy with the quality of the team's play in their Libertadores debut, a dire 0-0 draw against Zamora of Venezuela. Rumours abounded that Falcioni had resigned.

Since then relations have been patched up. Boca have won their last six matches in the competition and last week Riquelme was at his elegant and incisive best against Union Espanola of Chile.

Then, as this week, Uruguayan striker Santiago Silva was absent injured - but that might turn out to be a blessing in disguise. The Fluminense centre-backs would hope to deal with him - but Brazilian clubs can struggle against fast strikers down the flanks, exploiting the space left behind the attacking full backs, and it is here that Dario Cvitanich and Pablo Mouche will look to shine.

Boca would be ill-advised to go chasing the game because their defensive record is based on collective solidity. Should they over-commit, their lack of pace at the back will be exposed.

And much the same applies to Velez Sarsfield, whose priority against Santos must surely be to deny space to Neymar. Right-sided midfielder Augusto Fernandez has a big role to play helping out his defence, while at the other end Velez will hope that Juan Manuel Martinez, full of strong running and change-of-pace dribbling, can get behind the Santos right-back.

Neither Argentine side would be distraught to be held to a goalless draw. With the away goals rule in operation, there is a lot to be said for the home side in the first leg keeping a clean sheet - just ask Chelsea.

Q) I was just wondering if you could shed some light on Ganso's development? I was just curious due to the fact that a couple of years ago it was always Santos's stars Neymar and Ganso who were wanted by Europe's elite, but now all you hear about and see in the media is Neymar. Is he currently injured or just not playing maybe?
Shahib Uddin

A) Ganso was injured for a while, but he is playing well since his return. It is hard not to be overshadowed by Neymar, whose progress has been exceptional. Ganso, though, has bags of talent - a real, old fashioned, elegant number 10 with the vision to see the pass and the technique to play it.
I am a bit concerned, though, by the amount of premature praise he received from the Brazilian media - which is always difficult to deal with, especially at such a young age. Neymar seems to have dealt with all that. Ganso still gives some worrying signs. Last week, for example, he complained the reason for his disappointing performances with the national team were because he had not been given enough freedom. It is inevitable at this stage of his career, but his decision-making needs improvement. Too many times he is caught in possession in danger zones.

Q) How would you sum up Venezuela's footballing talents (on the whole and at a youth level)?
Michael Aridy

A) Their progress over the past two decades has been nothing short of amazing, but their domestic football has suffered from the process. Now young Venezuelans are on the radar, and being picked up by clubs in Europe and South America. The country invested heavily in stadiums for the 2007 Copa America and expanded the first division, and suddenly the quality has plummeted because of the exodus abroad. This year, for the third successive time, no Venezuelan club made it out of the group stages in the Libertadores. None of them won a game and Zamora could not even score a goal. It is a classic example of the difficulty of launching a league in today's globalised game.