Lords of the dance

Rashidi Yekini has died at a tragically early age, but in his all-too-brief time on earth he certainly left his mark. He will be remembered all over the globe not just for scoring Nigeria's first ever World Cup goal (against Bulgaria in USA 94), but also - perhaps more - for the way he celebrated.

One of the lasting images of the tournament is that of Yekini gripping the back of the net and then forcing his arms through the holes as he yelled out his thanks to the heavens. It was a beautiful moment because there was nothing contrived about it. It was a genuine, spontaneous show of deep emotion.

More cheesy but equally sincere was another famous goal celebration from that tournament - Bebeto scoring for Brazil in the quarter-final against Netherlands and then, joined by team-mates Mazinho and Romario, rocking an imaginary cradle. It was a tribute to newly born son Mateus, nearly 18 years later a promising player himself. As the proud father explained, the beauty of the celebration lay in the fact that it was entirely unplanned.

The same could certainly not be said of the thousands of imitations it spawned, and all the other little dances now found around the world in commemoration of the ball hitting the back of the net. These days planning new celebrations has become a cottage industry - one that has flourished in Brazil more than anywhere else.

It might be a consequence of the amount of time that Brazilian players are cooped up in hotels before every game. And, of course, what the professionals do, the kids will copy. I once saw a lecture by former national team coach Sebastiao Lazaroni in which he emphasised the motivational importance of goal celebrations when dealing with very young players. They should be encouraged to develop their own choreography, he said.

It is not advice that all would approve of. Cesar Luis Menotti who managed Argentina to the 1978 World Cup, is horrified by such modern fads. A few years ago, he wrote: "Many players have forgotten genuine emotion. Now they do little dances, take their shirts off or climb up the stands in the act of a demagogue. It's all planned for the media. I feel that the sense of respect towards the opponent is being lost." 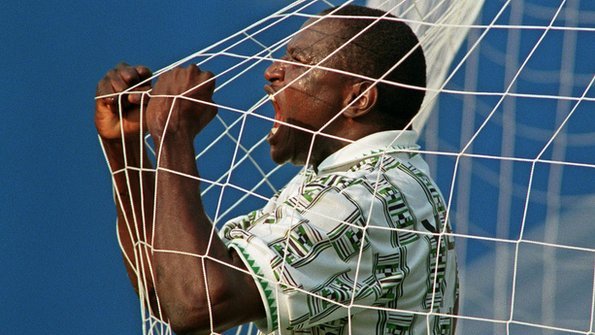 Pep Guardiola would surely agree. The outgoing Barcelona coach was not at all happy recently when two of his players, Daniel Alves and Thiago Alcantara, celebrated a goal against Rayo Vallecano with a few dance steps. That is simply not the way things are done at Guardiola's Barcelona. Club captain Carles Puyol quickly ran over to put a stop to the festivities, and the coach made a point of apologising to Rayo Vallecano in the post-match news conference.

The background of the perpetrators is surely significant. Daniel Alves is Brazilian, while Thiago Alcantara, though born in Italy and a Spanish international, is the son of a high profile Brazilian - Mazinho, who rocked that imaginary cradle alongside Bebeto.

Thiago quickly apologised for his dance steps. Daniel Alves, meanwhile, seemed nonplussed by the reaction. He did not appear to accept that he had committed any transgression - which is hardly surprising given the fact back home that such celebrations are not only tolerated but actively encouraged.

This might seem a minor incident of little import. The fact that Guardiola felt the need to apologise shows that it touches on values in the game that he sees as fundamental. It also reveals a certain proximity with the more philosophical school of Argentine coaches.

Menotti's old friend, Angel Cappa, was one of the coaches Guardiola consulted before stepping up to take charge of the Barcelona first team. Another was Marcelo Bielsa, the former Argentina coach now in charge of Athletic Bilbao.

If Guardiola is close to a strand of Argentine football though, he seems distant from the mainstream in Brazil. After his team brushed Santos aside in last December's World Club Cup final, Guardiola talked of the great football played by Brazilian clubs in the past. Delivered with elegance, it was still a barb. Guardiola's mentor Johan Cruyff is a frequent critic of contemporary Brazilian football. Where once they played like Barcelona, he recently said, they now favour the counter-attack like Jose Mourinho's Real Madrid.

Since Guardiola announced his resignation, some In the Brazilian media have drooled over the idea that he might be tempted across the Atlantic to take over the national team. It would seem highly unlikely, though it would certainly be fascinating.

Brazil's production line of talent continues to work overtime. But is very hard to find equivalents of Xavi and Iniesta, which is no coincidence. In football the idea comes first, and the Brazilian game has not been looking for little midfielders whose game is based upon possession of the ball. The closest I can think of is a former Barcelona player, Deco, who made his name abroad and ended up playing his international football for Portugal.

Hopefully, his example will rub off, showing Brazilian coaches and kids the value of the cerebral central midfielder. If others are inspired to follow his example that really would be something to celebrate - with dance steps and all.

Comments on the piece in the space provided. No space for questions on South American football this week, but send them to vickerycolumn@hotmail.com and I'll pick out a couple for next time.

Hopefully, his example will rub off, showing Brazilian coaches and kids the value of the cerebral central midfielder. If others are inspired to follow his example that really would be something to celebrate - with dance steps and all.
Comments on the piece in the space provided. No space for questions on South American football this week, but send them to vickerycolumn@hotmail.com and I'll pick out a couple for next time.