A top league with both quality and unpredictability

Even the most enthusiastic inhabitant of the Matthew Harding Stand might be reluctant to argue that Chelsea are the best team in Europe. But they dug deep, rode their luck, came up big at key moments and went home with the trophy. And this is the essence of a cup competition, with the chances that it creates for upsets.

League championships are a different matter. At the end of the season the table does not lie. The worst teams are at the bottom and the best ones are at the top - and in most major leagues the number of teams capable of making a genuine title challenge has fallen over recent years.

In the first full season I followed the English title was won by Derby County, who did it again three years later. There were still players around who had been active when the championship went to Ipswich and Burnley, unthinkable from today's perspective.

Before we start eulogising over the good old days, it is worth remembering that this competitive balance was underpinned by the treatment handed out to those who put on the show.

The existence of the (low) maximum wage meant that the great Tom Finney could earn no more at Preston North End than if he moved to Manchester United. And if he wanted a move anyway he could not have one. Preston could hold his registration for as long as they liked. And so they were frequent title challengers in the 1950s, while Finney was denied the chance of finding a stage more fitting for his talents. 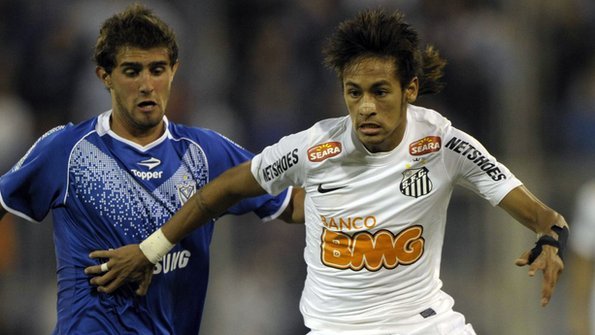 Neymar is among a host of young stars playing in the Brasileirao Serie A. Photo: Getty

Take such artificial restraints away and an inevitable process of concentration begins. Football is the game of the city. The big city giants can afford to pay more, so they attract the best players and a reduced number of clubs cut away from the pack. Make the area of operation worldwide and the number is reduced still further. There is space for a handful of giants to go global, first winning over fans in Asia and North America, and then working to find ways to turn this allegiance into money.

The super-size teams are thus able to assemble squads of dazzling quality, making it hard for the mid-size clubs to compete. The price of quality is a large dose of predictability, the big dilemma of today's top domestic leagues.

But there is one championship with the potential to come up with an interesting answer to the quality/predictability equation - Brazil, where the 2012 national league kicked off over the weekend.

A similar dynamic of predictability has been taking place in Brazil. A decade ago, for example, tiny Sao Caetano, existing on gates of around 2,000, spent a few seasons as title contenders. And Atletico Paranaense, from Curitiba - at best Brazilian football's fifth city - were champions in 2001. All of that is unlikely now.

For a start, the season is longer - in 2003 a fully fledged league system replaced the previous, shorter play-off format. The longer the competition the deeper the squad needed, making things harder for the smaller clubs. Also - fundamentally - there is more money around. The country has been experiencing a consumer-led boom and so clubs have been able to boost their revenues from TV and sponsorship.

More money means more quality, but because the former is not distributed equally nor is the latter. Gaps have opened up and it is now unthinkable that the Brazilian equivalents of Derby, Ipswich and Burnley can win the title.

Even so, the Brazilian championship is never likely to prove as predictable as the English or Spanish ones, for example. The sheer size of the country comes to its rescue. It is hard to imagine the title slipping out of the grasp of one of the giants from the traditional centres, but there are enough of them to keep things interesting.

Rio de Janeiro has four big clubs, Sao Paulo has four, Belo Horizonte and Porto Alegre each have two. Then there is the north-east of the country, where the mass support of the big teams has yet to translate itself into consistent strength on the field. Perhaps, though, 2014 World Cup investments will give the region a boost and the competition will benefit from the growth of more giant contenders.

The Brazilian championship, then, can combine quality with a healthy lack of predictability. But if it is to fulfil its massive potential, it must sort out its calendar.
The first round of any league should be a huge festival of football, the moment when fans flock to the stadiums eager to see their heroes in action. But the Brazilian Championship kicks off at the very time when the Copa Libertadores, the continent's Champions League, and the domestic cup are reaching the decisive stages.

Teams still involved in these competitions tend to pick reserve sides for the league games. There will be plenty of reserves in action later on as well. The fixture list goes straight through until early December, with no pause for Fifa dates or international competitions. The best players will miss a large chunk of the season away on duty with Brazil's Olympic team.

It is amazing that the clubs put up with such a situation. And even more incredible that they put up with a calendar that embarks on a long league season with no pause beforehand. For the last few months they have been engaged in the state championships, one for each of the 27 states that make up this giant country. Those clubs which did not win their state title are branded failures even before the leagues season starts. It was for this reason that the game I was at on Sunday, Botafogo against Sao Paulo, attracted fewer than 5,000 paying supporters.

The home side came from behind to win 4-2 in an excellent game, one that deserved a much bigger audience. The fact that it did not get one is a symbol of a league operating below its potential.

Send your questions on South American football to vickerycolumn@hotmail.com and I'll pick out a couple for next week.

Just wondering whether you think Universidad de Chile's manager Jorge Sampaoli will leave the club at the end of their Copa Libertadores run and, if so, where is he likely to end up? Is it possible we could eventually see him picked up by a European side? The way his team so confidently despatched of Deportivo Quito 6-0 in the last-16 second leg having lost the first game 4-1 was breathtaking to watch. Stewart Hogarth

His side have been breathtaking to watch over the last 12 months. La U are so good to watch because the team play with such dynamism. The man on the ball has five options to give a pass.

Will they win the Libertadores? I don't think they're as defensively solid as last year, and if they can't stop the counter-attack at source they can have problems. But if they do win it he'll surely want to be around for the World Club Cup. Long term, I'm sure he'll be thinking of Europe. Sampaoli is a Marcelo Bielsa-disciple and the success Bielsa has enjoyed at Bilboa will surely open up doors for Sampaoli on that side of the Atlantic.

Higuita amused us, Chilavert we praised. Dida almost joined the list but somehow came short, by what criteria, I don't know. What is your take about home-grown goalkeepers in South America and who would be some of your picks? Kenneth Kolo

I think you have left Dida a little bit short because he wasn't (at all) a character goalkeeper like the other two. But, occasional slip apart, he was safer, bigger and better in a more orthodox interpretation of the position.

His performances shed light on the fact that Brazil has become a fine producer of keepers. Huge credit must go to Taffarel, a pioneer in the sense that he was the first one to gain the confidence of an international audience. To play three World Cups with hardly an error is also a massive achievement, a real test of character.

Other favourites? Jose Francisco Cevallos made his mistakes, but his contribution is undeniable in the first Ecuadorian national team to play in a World Cup and the first club from the country to win the Libertadores.