If they were unable to do it in front of their own fans, can Benfica manage to beat Chelsea at Stamford Bridge this Wednesday?

Some might make the point that they were hardly at home last week.

The Lisbon giants kicked off without a single Portuguese player - and with an extraordinary complement of nine South Americans in their starting line-up, plus another on the bench (alongside a Brazilian-born Spaniard), and one more ruled out by injury.

And that is not even the half of it. Benfica have a further 17 South American players out on loan with other teams.

Of the four big clubs here in my adopted city of Rio, three have a midfielder who is on the books of Benfica: Airton at Flamengo, Felipe Menezes at Botafogo and Fellipe Bastos at Vasco da Gama - who also have right-sided striker Eder Luis. 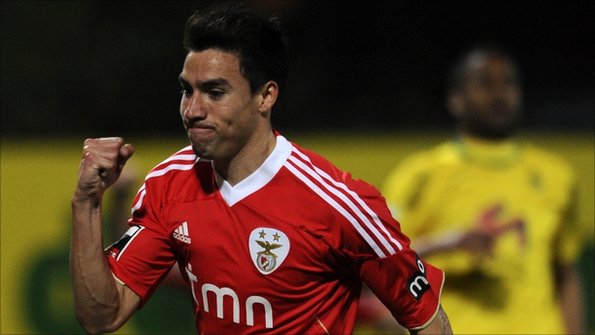 Nicolas Gaitan has been on fine form for Benfica in the Champions League and may be persuaded to move to one of the more successful clubs in Europe. Photo: Getty

Old colonial and linguistic ties explain why Brazil is Benfica’s favourite shopping venue - five of last week’s first team are from South America’s giant, plus another 10 who are out on loan.

But they are also on the lookout for talent all over the continent, snapping up players from Uruguay, Paraguay and Argentina.

Benfica come back from the South American sales with more players than they can ever use. Many will simply not get an opportunity. This can happen to big name players.

Enzo Perez is a full Argentine international, a versatile right-sided midfielder who was fundamental to the campaign of Estudiantes when they won the Copa Libertadores, South America’s Champions League, in 2009.

Frustrated at not getting a look in at Benfica, after a few short months he has already been loaned back to La Plata, lining up once more with Estudiantes.

Benfica will not be too concerned if he and a few others in a similar situation spend their entire contracts out on loan, after which time they become free agents. Perez may yet return to triumph in the red shirt.

But if not, if Benfica get nothing from him, then he can be written off as an acceptable business cost. If so many South Americans are signed up, then some of them will inevitably prove surplus to requirements.

But there are another two groups that are extremely useful.

One consists of the type of player who gives long term, solid service. All-action Uruguayan right back Maxi Pereira is one example, but perhaps the best is Brazilian club captain Luisao.

The gangling centre back has rarely been first choice for Brazil. But one after another, national team coaches queue up to name him in their squads. He has been to the last two World Cups, and at the age of 31, is even in consideration to be one of the over-age players in Brazil’s Olympic squad.

All of this is evidence of the type of man he is - one happy to put team before self, an ideal team captain. Luisao has been at Benfica for the long haul.

For the more glamorous players, though, it is often a case of two or three years and out. Benfica buy enough South American lottery tickets to hit the jackpot now and again, and sell someone on at a huge profit.

This, of course, needs good scouting. David Luiz, for example, was picked up as a raw youngster, and Ramires was acquired just as he was on the verge of breaking into the Brazil squad. Both, of course, were subsequently big money signings for Chelsea, Wednesday’s opponents.

It is this third group of South Americans, the potential stars, who finance the whole project. In the short term they tip the balance on the field. In the long term they boost the club’s finances.

The next one along the line is surely Nicolas Gaitan of Argentina, signed from Boca Juniors in 2010, and a likely target for a giant from a bigger league in the next transfer window.

Gaitan was originally groomed as a playmaker, a consequence of the Argentine obsession with the old fashioned number 10. A similar thing happened with Carlos Tevez at Boca a few years earlier.

When Juan Roman Riquelme was sold to Barcelona, attempts were made to force the young Tevez into a Riquelme-shaped hole, until the 2003 Libertadores campaign made it clear that he did his best work close to the opposing goal.

Riquelme was back at Boca by the time Gaitan was breaking through, and the youngster was originally seen either as his replacement or as his partner, operating on the left of midfield.

But it was clear that Gaitan was at his most effective when he broke into the forward line.
Veteran coach Alfio Basile transformed him into a support striker.

He played his best football for Boca on the right side of the attack, from where his booming left-footed crosses had an ideal trajectory for big centre forward Martin Palermo to attack at the far post.

At Benfica he is free to roam, and can cause havoc with his crossing from either flank. But he is much more than a winger.

He retains the number 10’s vision for a defence splitting pass, and also has the capacity to dart inside to find goalscoring positions.

All of this was on show last Saturday when he set up Bruno Cesar’s injury time winner against Braga.
It is the versatility of his attacking talent that makes Gaitan so interesting.

If Benfica are to stage a second leg comeback against Chelsea, then he is likely to be behind it. But whatever happens on Wednesday, Gaitan’s time with Benfica could well be drawing to a close.

Comments on the piece in the space provided. Questions on South American football to vickerycolumn@hotmail.com, and I’ll pick out a couple for next week.

Q) With Brazil’s economy recently overtaking the UK’s, can you foresee an increase of foreign investment in Brazilian clubs like there has been in other aspects of Brazilian businesses? If so, will you expect to see more Brazilian exports returning to their homeland rather than prolong a career in Europe as well as other gems such as Neymar and Ganso staying?
Sean Brown

A) There has been a significant change in the conditions of trade, with big name players coming back earlier than before and young prospects staying longer. But one thing remains the same - players are still aiming to spend their peak years in the Champions League. Regardless of any financial considerations, in purely professional terms domestic Brazilian football cannot currently offer a similar challenge.
Investing in clubs is problematic because of the difficulty of establishing control. Brazil’s clubs are not businesses. They are social membership clubs. You cannot buy up the shares and then own the club.

Q) What are the prospects of getting a global champions league in place? Or at least one that includes South American clubs? I live in The USA and am an avid fan of the game. I would very much enjoy a tournament that included teams from more than just Europe. Is this feasible?
Patrick Klasen

A) I’d love to throw this one open for debate. There is, of course, a tournament that includes the champions of all the continents - the World Club Cup, something I would like to see receive more attention, especially in Europe.
The Europeans can argue that the current superiority of their teams does not make for an attractive tournament - but that superiority is not permanent.
A combination of economic and football development could level the playing field. Might an improved World Club Cup one day pave the way for a global Champions League? What do people think?