How the away goals rule counts double in South America

Imagine if Didier Drogba had missed that chance against Barcelona last week at the end of the first half.

It was Chelsea's only shot on target in the match. Had it not gone in, would their approach in the second half have been bolder?

I am inclined to doubt it. From a Chelsea point of view, scoring was great - but even better was stopping Barcelona get on the score sheet.

The away goals rule was introduced to encourage adventure from the visiting side and, for a while, seemed to be successful. But there is a sense now that it often has a very different effect - giving the home side in the first leg a powerful incentive not to concede. 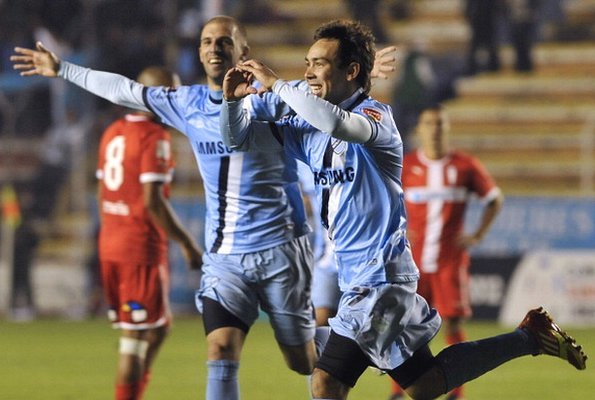 There are those in Europe who argue that the rule has outlived its usefulness, that in a continent where journey times are short there is no need to offer such a benefit to the away side.

In South America things are different. For a start, the continent is bigger. Journey times are huge, and there are conditions such as altitude and temperature differences which make it hard for the visitors.

Away wins are much rarer on this side of the Atlantic. So far in World Cup qualification there have been 11 home wins and two away. The group phase of this year's Copa Libertadores, the continent's Champions League equivalent, came to a close last week with a score of 56-23 in favour of the hosts.

With this in mind, it is possibly true that the away goals rule makes more sense in South America than it does in Europe. The rule was introduced in the Libertadores in 2005 and has already made its presence felt.

It would be expected, then, that the group winners would prevail. They, after all, have done better so far in the competition. The contest is weighted in their favour by the fact they have the right to play the second leg at home.

This is perceived as a considerable advantage and teams are prepared to fight for it. Had they glanced at recent history perhaps they would not try so hard.

Last year, of the eight second-round contests, five went against form, and were won by the group runner-up. Over the last five years this has happened more often than not.
In considerable part, this is a tribute to the glorious unpredictability of football but it also has something to do with the effect of the away goals rule.

Far from being a handicap, for the inferior side it might even be an advantage to be at home for the first leg, keep things tight and then look to play on the break in the return game.
This was certainly the secret of Uruguayan club Penarol's run to last year's final. As one of the qualifiers with the worst record in the group phase, they were at home in the first leg of every knock-out round - and turned the supposed punishment into a positive advantage.

In those four home games they conceded just one goal - and then scoring on their travels kept getting them through. Penarol then came unstuck in the final, because this is the only time when the away goals rule is not used.

Had it been in effect, their 0-0 draw at home to Santos of Brazil in the first leg would have been a very useful result. In the event, Santos won 2-1 to take the title. If the away goals rule had been in operation then against such proficient counter-attacking opponents the Brazilians might have felt more inhibited about pushing forward.

This is not a problem that the defending champions are likely to face this week, even though the away goals rule is in effect when they get the knock-out rounds underway. In their first leg,

Santos are away to Bolivar, the theme of last week's column who last Wednesday beat Chile's Universidad Catolica 3-0 to become the first Bolivian side to make it out of the group phase for 12 years.

Under Argentine coach Angel Hoyos, once in charge of Barcelona B, Bolivar are not counter-attack specialists and they will also surely be going all out to get the most from playing at the extreme altitude of La Paz.

Brazilian clubs are so uncomfortable at altitude that a few years ago they launched a campaign to ban games in these conditions. Santos have already lost in La Paz in the current campaign, going down 2-1 to Bolivar's local rivals The Strongest.

Should Bolivar pull off a surprise and get through to the quarter-finals, it will surely not come through cunning use of the away goals rule, but rather from the more traditional route of making the most of home advantage.

Colombian striker Jackson Martinez, 25, who plays for Jaguares in Mexico, is being tipped for a big-money move to Europe this summer. What are your thoughts?
Oliver Serrant

He's quick, sleek and uncomplicated. A thoroughly proficient front to goal finisher. My doubt is about his touch and overall approach play. He doesn't offer much else, so if he gets a move and he's not scoring early then confidence could slump.

Can you give your views on whether Lionel Messi is a great or not?
Chris Bender

I don't think Messi's greatness can possibly be in doubt. In terms of standard of play the Champions League is the best we have. Season after season Messi is outstanding in it. The best of all time is a different debate and a very frustrating one. How to compare eras? There's the fact that Messi is probably not even the half-way stage of his career