End of the road for Ronaldinho's Flamengo

While Europe's Champions League is down to the last four, the South American equivalent, the Copa Libertadores, is whittling down its field to the 16 teams who will go into the knockout phase.

Twelve places have so far been filled, with some high drama along the way.

For a few sweet seconds, for example, Flamengo of Rio thought they had saved themselves from elimination.

Fielding the likes of Ronaldinho and Vagner Love, they should have strolled through, but a disappointing campaign left them needing a combination of results to go their way in last Thursday's final round.

They had to win at home to Lanus of Argentina - the relatively easy part, since their opponents had already made sure of qualification. The hard part came in the other game, which kicked off at the same time. Olimpia of Paraguay and Emelec of Ecuador had to draw.

The winner in Asuncion would go through with Lanus.

Flamengo had made sure of victory by half-time, but news came in from Paraguay that Olimpia were a goal up.

They should have been more careful what they wished for because, by the time the final whistle blew in Rio, the Ecuadorians had turned things round - they led 2-1, with five minutes of stoppage time to play. 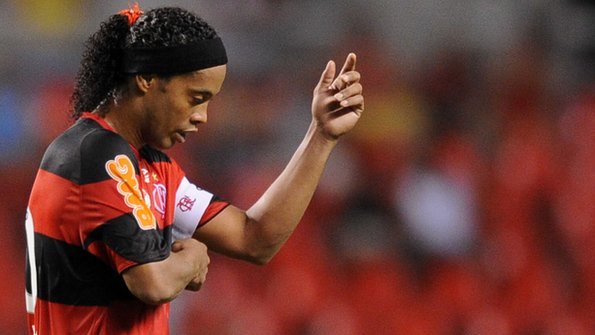 Ronaldinho's Flamengo crashed out of the Copa Libertadores. Photo: Getty

The Flamengo crowd applauded their team - Ronaldinho had finally produced a performance worthy of his name - but they were resigned to elimination.

And then Olimpia equalised. Suddenly Rio was about to party. The crowd sung in jubilation, the Flamengo players hugged each other, jumped up and down and gave interviews celebrating their miraculous escape - all cut short and turned to tears by the news that Emelec had gone straight up the other end and scored a 94th minute winner.

And so it is the Ecuadorians who go through, after winning both of their last two games in stoppage time.

But they might not be the biggest surprise team in the last 16. Both Bolivian representatives still have a chance, despite no side from the country making it out of the group phase since 2000.

The Strongest, though, will need to perform a super-human show of strength to progress. They need a win away to reigning champions Santos of Brazil, and it is entirely possible that only a five-goal victory margin will be good enough.

Bolivar, meanwhile, have a much better chance. They only need a draw against Universidad Catolica of Chile, and they are playing at home, where the extreme altitude of La Paz makes life so difficult for the visitors.

But there is a striking detail in Bolivar's campaign because they have picked up more points away than at home. Even more striking is the way they have done it.

Typically, Bolivian sides on their travels will attempt to be ultra-cautious, hanging off their own crossbar like a collection of bats, hiding the ball and praying for the final whistle.

The Bolivar of 2012 are very different. In all three of their away games, they have looked to take the initiative, playing at a high tempo, throwing their full-backs forward, fielding strikers in wide spaces and seeking to set up triangles and create two-against-one situations down the flanks.

Part of the explanation for this bold new approach can be traced back to Barcelona. Angel Hoyos, Bolivar's Argentine coach, was in charge of Barcelona B from 2001-6, during which time he helped a certain Lionel Messi on his way.

After leaving Catalonia he spent five years in Greece and Cyprus, before moving back across the Atlantic to join Bolivar at the start of last year.

Perhaps his finest hour so far in his current job was the 1-0 win away to Junior of Barranquilla in this year's Libertadores. The massive stadium of the Colombian club can be an intimidating arena for visitors, and the heat can be awkward for altitude-based Bolivians.

However, Hoyos' team deserved their win.

Such a bold approach has its risks. Bolivar can lack the penalty area presence to take advantage of all the width they create, and the attacking approach, especially the high positioning of the full-backs, can leave them alarmingly open.

Last week, away to Union Espanola of Chile, they conceded a type of goal rarely seen in top-class professional football.

The opposing keeper's punt forward left Jaime free down the left channel, one-on-one with Marcos Arguello in the Bolivar goal. Sebastián Jaime nodded past the keeper and the ball seemed to be going in until centre-forward Emanuel Herrera provided the killer touch almost on the line - end-to-end in three touches, one of which may have been superfluous.

But the opposing counter-attack will always be a risk for a team which seeks to take the initiative, and it is surely best for Bolivar to stick to their guns on Tuesday night rather than rely on the fact that a draw is good enough to get them over the line.

Universidad Catolica are dangerous opponents. They have been a huge disappointment in this year's Libertadores, coach Mario Lepe struggling in vain for the right blend, but they are packed with attacking talent and, with Chilean sides more comfortable than most at altitude, they will fancy their chances of saving themselves.

Going all out to exploit Catolica's defensive deficiencies is the home side's best bet as they seek to become the first Bolivian club in more than a decade to reach the knockout stage.

It is the way Bolivar have played it so far, and the way coach Hoyos is making a name for himself.

Q) I have heard a few good things about Paraguayan striker Mauro Caballero, but I have never seen him play myself. I have heard there is interest in him from within Europe, despite him only being 17. Is he actually something special, or is he another that at present is only potential and needs time? I often feel players who cut their teeth in Europe, particularly in Portugal, often do better as professionals. Do you think this path would suit him as well?
Thomas Wright

A) I do hope Caballero could be something special. His dad was a good player, but the son looks better. He has a good left foot, jack-in-the-box penalty area pace and awareness. He is a very exciting talent. With him at Libertad and the strikingly mature Alexis Henriquez at Universidad de Chile, this is proving to be a good Libertadores for 17-year-old strikers!
Of course they need time, and I'd hate either to be rushed into a premature move. The most important thing at this stage is to get first-team opportunities.
I take your point about Portugal - it works well for some, but not nearly as well for others who are deemed surplus to requirements. The Portuguese giants buy up so many South Americans that there simply isn't space for many of them.

Q) I was wondering if you could shed any light on the fortunes of Kerlon? I seem to remember him being the star of an Under-17 tournament, but since he signed for Inter I haven't heard, or seen, anything of him.
Andy Ingram

A) He's trying to get fit enough to play for Nacional of Nova Serrana, a relatively small club who play in the State Championship of Minas Gerais (Brazil).
He did come to prominence in the South American Under-17 tournament seven years ago, where he won instant fame with his 'seal dribble' - running with the ball bouncing off his nose.
He was much more than a trickshow artist, though. He really stood out for the versatility of his attacking midfield talent.
However, two things have stalled his career. First, he became a victim of his party piece, under pressure to produce the 'seal dribble' every time he played. Much worse, though, was a succession of injuries.
They first struck in 2005 - he missed that year's World Under-17 Cup and, ever since, it's been one injury after another. He's been at Nacional for months, and is only now ready to play for a few minutes.
He's now 24, and you fear for him ever launching a senior career - a real shame, because with his quality and imagination he was shaping to be a very interesting player.