Argentina will be hoping Lionel Messi is finally starting to transform his stunning club form with Barcelona to the international arena following his magnificent hat-trick in the 3-1 win against Switzerland.

The hints were there late last year, in the second half of the World Cup qualifier away to Colombia, and now the Switzerland game has surely consolidated the Messi-Sergio Aguero link-up at the heart of the Argentine attack.

The pair have had a natural rapport for years, built up when they roomed together during the 2005 World Youth Cup, and now that understanding is clearly visible on the pitch through their pacy, dazzling exchanges.

Away to an adventurous Swiss side, there was space for the pair of them to explode on the counter-attack. Against more cautious opponents there could well be the need for the greater penalty area presence of Gonzalo Higuain.

In that case, Messi and Aguero can form an attacking trident with the Real Madrid man.
Indeed, that was the way they were set up in the second half against Colombia, when the introduction of Aguero at the break changed the game, giving Messi someone to combine with when he dropped deep in search of possession.

More than any tactical innovations, Argentina will hope the Switzerland match proves important in psychological terms. Messi has enjoyed some excellent games for Argentina in the past, but this was the first time that the headlines in the local press proclaimed that he had produced his Barcelona form for the national team. 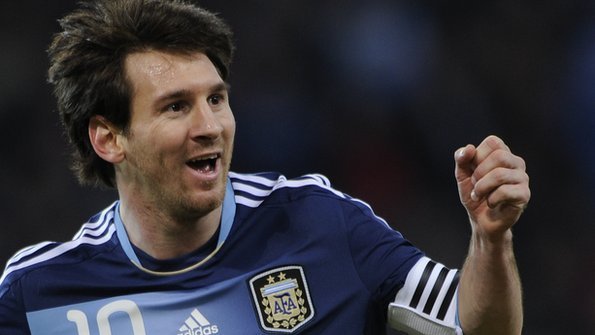 Messi has made over 67 appearances for Argentina, scoring 22 goals. Photo: Getty

This is significant because almost the only place in the world where the presence of Messi is not guaranteed to fill a stadium is in the land of his birth. He tries hard to identify himself with Argentina, with the city of Rosario and the Newells Old Boys club.

However, when performances are disappointing, he meets with resistance from his own people, who are quick to seize on the fact that he has been based in Barcelona from the age of 13.

"You're not really one of us," they seem to be saying. "You are more Catalan than Argentine. You don't sing the national anthem or feel with passion the colours of the flag."

And it does not matter what he says. Words do not count - deeds do.

The public want to see the Messi of Barcelona, often forgetting that for the national team he does not have a Daniel Alves to burst outside him, or a Xavi and Iniesta to supply him with the ball. But he does have Aguero.

The resistance towards Messi in an extreme case, but in the proud footballing cultures of Brazil and Argentina it does not take much for the European-based players to be viewed with suspicion.

If the national team are winning in style, little attention is paid to where they play their club football. Anything less, and those who play in Europe are sometimes branded uncaring mercenaries.

In any case, the call will always come for the selection of more home-based players.
This is a political reality the coach has to deal with - especially in contemporary Brazil, where with the clubs paying top wages there are more viable candidates for the national team playing their football for domestic clubs.

Last year, for example, Brazil boss Mano Menezes could hardly afford not to recall Ronaldinho to the national team. The former world player of the year had moved back home to join Flamengo, the country's most popular club.

Around the middle of the year he found flickers of form. Brazil, meanwhile, had done badly in the Copa America and were not looking good in friendlies- giving Ronaldinho another chance became a political necessity.

Against Ghana at Craven Cottage last September it was soon apparent that he was off the pace. The rhythm of international football, as Menezes commented after the match, is more intense than that of the domestic Brazilian game.

He gave an interesting performance against Mexico late last year, organising from a deeper position, but his reign as first-choice number 10 may well have come to an end with an unimpressive display in last Tuesday's 2-1 win over Bosnia.

By now Ronaldinho has ceased to be the public's sweetheart, his credibility undermined by a dip in club form and his night time escapades. Mano Menezes gave him enough rope, and can now cut him loose if he chooses because he has Paulo Henrique Ganso of Santos ready to step up.

Brazil's game against Bosnia flowed much better after Ganso replaced Ronaldinho for the last half hour. The elegant left footer is a wonderful prospect - so much so that he too has also been at the centre of the nationalist debate.

When Ganso came through strongly two years ago, the Sao Paulo press were falling over themselves to praise him. He was, they said, already the best in the world in his position, a left-footed reincarnation of Zinedine Zidane.

It was conveniently forgotten that he was only shining in a desperately poor version of the Sao Paulo State Championship, and against poor opponents in the Brazilian Cup.
The problem was that the player appeared to believe his own publicity. Then came the reality check.

The subsequent two years have been filled with injuries and excellent learning opportunities - such as a disappointing Copa America and the experience of playing against Barcelona last December.

History could decide that Mano Menezes has played shrewdly with the political forces, using Ronaldinho as a shield while also holding back Ganso until the time was right for a natural transition in the ownership of Brazil's number 10 shirt.

Q) I would say most Colombians are happy with the scoreline after the 2-0 win over Mexico, but I was disappointed in Colombia's style of play. I was expecting a build up from the back, short passing, and a possession game from Jose Pekerman. Instead there was a lot of counter-attacking. Are Colombia going to be a counter-attacking team from now on?
Fernando Fernandez

A) It's worth remembering that they were up against a Mexico side that really came at them, and the next two World Cup qualifiers are away from home, against Peru and Ecuador. So there's no harm in an early focus on the counter -attack, with the excellent Darlon Pabon high up the pitch on the flanks where he can do most damage. I was also pleased Juan Cuadrado played from the start - I think they've missed the kind of unpredictability he can bring. Aldo Leao Ramirez was the surprise inclusion, there to knit the game together from midfield - an indication that long-term Pekerman is looking beyond the counter.

Q) Chile's Milovan Mirosevic has signed with my adopted MLS team, Columbus Crew. Everyone seems very excited by his signing - calling him a designated player without the pricetag. He is also, inevitably, being dubbed the next Guillermo Barros Schelotto. Is he that good? Does he have the ability make the Crew a contender in the MLS this year? Will he bring the leadership to the Crew that they have been missing?
Ben Dettmar

A) I remember being really excited by Mirosevic when I saw him for the first time as a teenager back in 1998. He appeared to have so much - an attacking midfielder of strength and explosion, tight skills and a crashing right foot. I've seen many good performances from him over the years, but for reasons I've never understood he has not gone on to achieve as much in the game as I had hoped and expected.
I'm not sure about him as a team leader. I do not think he quite has that battle-hardened nature of Schelotto, but he's more physically dynamic and I think the club is justified in being excited about him.