Neymar a match for Messi on Day of the Goal

A Brazilian journalist this week came up with the thoroughly sensible idea that 7 March henceforth be commemorated as world football's Day of the Goal.

It was not only the date on which Lionel Messi chalked up his five for Barcelona in the Champions League; in the South American equivalent, the Copa Libertadores, Neymar of Santos also added a magnificent hat-trick of his own.

The first was nothing to write home about - a penalty which was perhaps harshly awarded. But there can be no quibbles about the other two. Both times Neymar picked up possession in his own half, cut through the defence and ran some 70 metres before scoring.

The goals showcased his extraordinary control over the ball while running at pace, his capacity to understand space and improvise with its possibilities inside a fraction of a second, and also his eerily cool finishing. 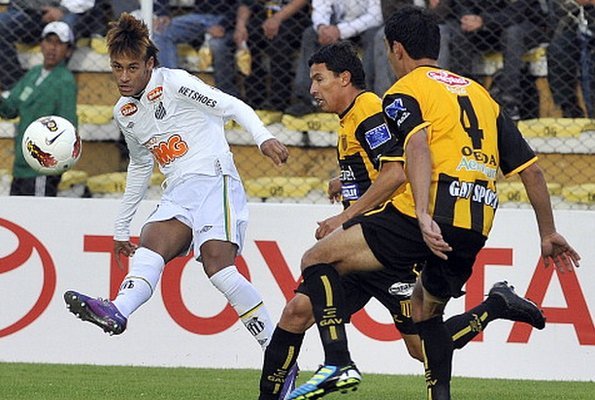 Neymar (left) could be to the Copa Libertadores what Messi is to the Champions League. Photo: Getty

One goal was a right-footed finish, the other a left. Both of them serve as a convincing declaration of a rare talent.

There can be few qualms about the opposition either. Santos were playing fellow Brazilians Internacional in a clash between the last two winners of the Libertadores.

Some will point out that Internacional have fielded stronger defensive units than the one they put out on Wednesday.

It is a fair point and it is also true that so far Neymar has found it difficult to produce moments of this quality when playing for Brazil - observations that make him one of world football's most fascinating narrative strands to follow over the next few years.

There is no doubt that the talent is all there. But how will he cope when pitted against better, stronger defenders, in spaces reduced by higher defensive lines, and with less protection from the referee? How will Neymar fare when he is up against the best?

Of course, he has already had one such experience, when his Santos side took on Barcelona last December in the final of the World Club Cup. They were brushed aside even more easily than the 4-0 scoreline might suggest. But it was hardly Neymar's fault.

How could it be when his team barely had the ball? This was not an individual failure, it was a collective one.

"I came back from Japan after our defeat by Barcelona convinced that we need to renew our football," said Santos president Luis Alvaro Ribeiro.

"We spend a lot of time gazing at our own belly button. We were beaten by a new football that we didn't know."

Implicit in his comments is a criticism of the coach Muricy Ramalho. Hugely successful in Brazilian football, Ramalho loves to talk about how hard he works. But after studying Barcelona for six months, there was little evidence of progress.

He merely sent out his team with the formula he knows best - three big centre-backs, hope to hold the opposition at bay and break out with a goal from a counter-attack or a set-piece. As his team were torn to shreds he cut a pitiful figure on the bench.

The warning signs were there in a big interview he gave a few weeks earlier to Brazil's sports daily 'Lance!' when he came across as complacent.

European coaches, he said, were only worthy of seven out of 10. To get top marks they would have to succeed in the Brazilian context - with an insane calendar, sub-standard structure and unpaid wages.

Since he has thrived in such conditions, it was clear that he was awarding himself the full 10.

It was a silly thing to say, firstly because it makes a fetish of poor working conditions, as if they are the true test of quality.

Secondly, because taken to its logical conclusion, it would mean that Brazilian coaches are the worst in South America and Bolivians are the best, because they have to work with the weakest players - and this surely was not Ramalho's intention.

He plumbed new depths in the press conference following the match against Barcelona, when he said that the defeat his side suffered would not have the slightest effect on them. After waiting six months to be measured against the best and then to have been massacred in such a manner, his words were fooling no-one - least of all, as it turns out, himself.

Over the last five years, with three different clubs, Ramalho has won four Brazilian titles and the Copa Libertadores. No-one is lucky for that long. There are clearly merits in what he does - and it now seems likely that the experience of coming up against Barcelona has shaken him out of his complacency.

Alongside the performance of Neymar, the most interesting thing about Santos last Wednesday was the way they pressed Internacional in midfield, with clusters of three and four players aggressively advancing to close down the opponent in possession.

This is not a normal part of the Brazilian game and it was surely influenced by Barcelona, as was the make-up of the midfield. A team can only put so much energy into winning the ball if it knows that possession will not be given away cheaply. Unlike many contemporary Brazilian midfields, all four of the Santos quartet are comfortable on the ball.

Their pressing was not perfect. They probably would have had more problems if opposition coach Dorival Junior had remained true to his convictions and sent out a team that sought to impose itself rather than contain.

As it was, Internacional were able to expose the defensive weaknesses of Santos left-back Juan, once of Arsenal, and could easily have scored three times from passes played inside him.

Even so Santos were well worth their 3-1 win and it was fascinating to observe the development that has taken place since they lost to Barcelona. It raised hopes that if the two teams manage to retain their respective continental titles then the final of this year's World Club Cup might be a more interesting affair.

Perhaps Neymar, as well as Messi, would have a platform to show his skills - and then we really would have a day of world football to celebrate.

Q) In the English media there are suggestions of interest from Liverpool in Jackson Martinez, a Colombian striker who plays for Jaguares in Mexico. Do you think he's got the necessary attributes both as a professional and as a personality to achieve success in the Premier League or elsewhere in Europe? Jay Wynn

A) He's an out-and-out goalscorer, a front-to-goal centre-forward who can finish off both feet, and with excellent spring that makes him a threat in the air. Something of a late developer, he burst into life three years ago when he broke scoring records in Colombia with Medellin, and has since carried that form into Mexican football. The Premier League is a step up, though. His touch and general approach play are not great, and the worry would be that he might not build up a head of steam to feel confident about his game.