For better or worse? How Havelange's global vision changed football

Laid low by an infection, former Fifa president Joao Havelange is gravely ill in a Rio hospital, where no doubt he is profoundly irritated at being forced to interrupt his daily routine of swimming 1,000 metres.

At the age of 95, Havelange remains a force of nature. Over 30 years ago he used his strength to change world football.

When Premier League chairman Sir Dave Richards made his recent remarks about Fifa "stealing football from the English", there can be little doubt that he had 1974 in mind. That was the year that Havelange unseated England's Sir Stanley Rous to become Fifa president.

It was a time of change. After the Second World War, Europe represented more than half of Fifa's membership. By 1974, the old continent was down to less than a third. The post-colonial age was producing new nations, increasingly unhappy at being shut out of the game.

Havelange was elected on a pro-developing world ticket. He promised an expansion of the World Cup, with more places available for non-European nations. He pledged to introduce World Cups at Under-20 and Under-17 levels, tournaments that could be staged in the developing world.All of this had to be paid for - and it was here that Havelange commercialised the game, bringing on board multinational sponsors to help bankroll his new agenda.

Much of this has problematic elements. The extent to which the game sells its soul with such commercial dealings is an interesting debate, though by no means one limited to Fifa business. 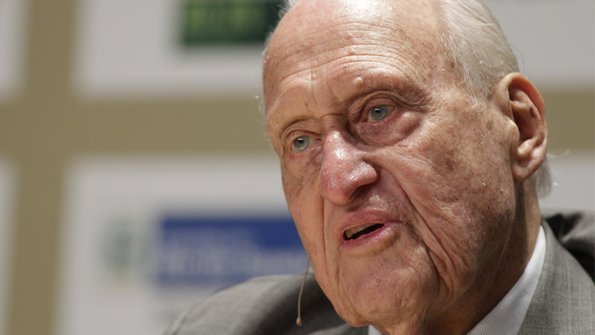 Joao Havelange was Fifa president between 1974 and 1998. Photo: Getty

There is little doubt, though, that in the case of Fifa that organisational structures and general transparency were not improved to cope adequately with the amounts of money now sloshing around the game.

There are clear problems in the total dependence of some nations on Fifa hand-outs. The scope for corruption was enormous, and the cold and autocratic Havelange was not the only one to have his name involved with scandals.

Corruption is, of course, deeply lamentable, a cancer that grows in organisations, undermining basic values as it goes. There is, though, a basic point about Fifa corruption which is rarely made; it has been the unwelcome by-product of a project that achieved its aims.

Havelange's ideas of globalising the game were clearly successful. The World Cup was taken to Asia, Africa and the USA for the first time. Football generates amounts in TV rights and sponsorship deals which would have been unthinkable in 1974, precisely because the global popularity of the game has gone through the roof.

Would this really have happened had the Europeans stayed in charge? Would anyone really want to go back to the time of Stanley Rous, who organised the 1966 World Cup with just one place for all of Asia and Africa combined?

To the end of his reign, and with no regrets, Rous fought in favour of South Africa's inclusion, long after the country had been expelled from the Olympic movement. The logic appeared to be that the local FA could hardly be blamed for carrying out government policy.

Nowadays, Europe's clubs protest about Fifa's operations, but it comes across as a smokescreen to help them get what they want - less international football, and more compensation for allowing 'their' players to take part in it.

When it comes to the rest of the world they typically seem more concerned with plucking the fruit than watering the plant. An inclusive, global vision is lacking.

Rightly or wrongly, with all its flaws and problems, Joao Havelange had one.

Q) Could it be argued that Pele's goalscoring record is flawed, given that a large proportion of those goals were scored in friendlies and the Campeonato Paulista?
JJ Donnelly

A) It certainly could. To be fair to Pele, though, the Campeonato Paulista (Sao Paulo State Championship) was much, much better in his day than it is now. It was taken much more seriously and the depth of talent was much deeper than these days, when so many Brazilians are sold abroad.

Having said that, Pele's scoring figures have been boosted massively by friendlies, games in the army and so on. None of this detracts for a moment from his greatness as a player. He was a machine for playing football, and time and time again he passed the real test of the great player, giving magnificent performances for his team on big occasions.

For this reason Pele was very unwise recently when he said that Lionel Messi needs to score 1283 goals to be worthy of a comparison. The greatness of Pele does not lie in statistical accumulation.