What Brazil can learn from Barcelona

In 1924, Uruguay arrived as unknowns at the Olympic football tournament in Paris, took everyone apart on the way to winning the gold medal and changed football forever.

The enthusiasm they set off led to the birth of the World Cup six years later. And like so many significant events in football, it was not just because they won - it was because of the way they did it.

Contemporary accounts raved about them. Influential journalist Gabriel Hanot praised their "marvellous virtuosity in receiving the ball, controlling it and using it," and drew attention to their "beautiful football, elegant but at the same time varied, rapid, powerful, effective."

It was South American football appearing before the world. It came from Uruguay, but it could have been Argentina. And within a few years, it could also have been Brazil.

Instead of the dominant, hard running, muscular Christianity style dictated by the English, this was something more subtle and balletic, made to measure for the short player with a low centre of gravity. 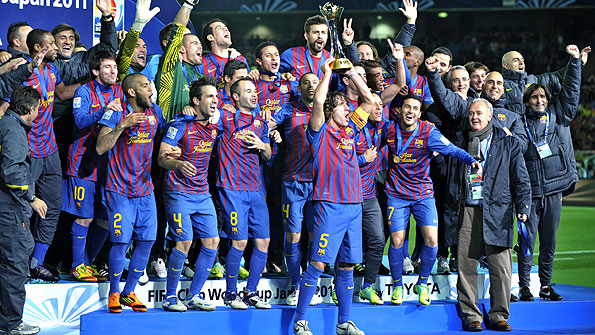 Barca added yet another trophy to their collection with a comfortable win in Japan. Photo - Getty

Fast forward 87 years. Two teams played in Japan on Sunday with the World Club title at stake. Hanot's words apply to one of them - and it is not the South American.

Like watching Muhammad Ali against some outgunned challenger, Barcelona's destruction of Santos was as joyful as it was clinical. Xavi, Andres Iniesta, Cesc Fabregas and Lionel Messi ran rings round Santos as if the Brazilians were traffic cones in a training exercise.

According to the dominant current of thought in Brazil in recent years, this sort of thing is not supposed to happen. The physical evolution of the game, it was thought, had made it impossible. In this modern football of reduced space, the central midfielders need to be six-footers, big and strong enough to win the 50-50 balls and protect the defence.

And there was no point in possession football - a move with more than seven passes had a reduced chance of ending up in a goal. The way to win was to block the middle and look for quick counter attacks and set-pieces.

And the quality of the play? "If you want to see a spectacle," says Santos coach Muricy Ramalho, "then go to the theatre." Or maybe go to watch his side taken apart in such style by Barcelona.

In football the idea comes first. And the line of thinking helps explain the type of players produced. In Neymar Santos could count on a Messi equivalent. But where is the Xavi or the Iniesta? Brazilian football no longer has them because it is not looking to produce them. They do not fit the mould.

Perhaps the closest in recent times is the ex-Barcelona player Deco, who struggled for space at home and made his career abroad.

Instead of mobile little intelligent passing midfielders, Brazil has excelled in producing flying attacking full-backs - something Barcelona have successfully assimilated into their model. And also tall, unimaginative, limited central midfielders. These Barcelona can do without.

The set-piece and counter-attack model could have worked on Sunday. After six minutes, the game still goalless, Neymar got into a threatening position in his team's first counter-attack. Carles Puyol snuffed out the danger. But imagine if Neymar had eluded the tackle and gone on to score. Santos could have parked the bus with even more conviction.

Internacional of Porto Alegre managed to do it to win the world title five years ago - admittedly against a version of Barcelona inferior to this one. With the talent of Paulo Henrique Ganso and Neymar, Santos would surely have carved out further opportunities on the counter. There are many different courses that a single game can take. 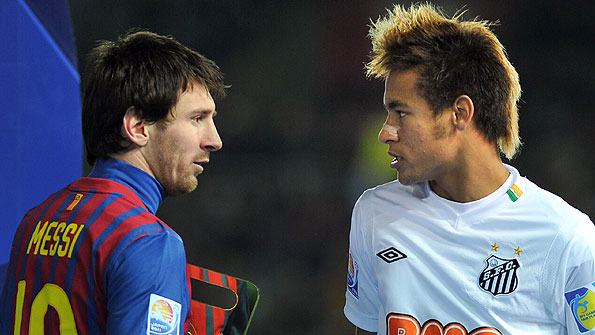 Brazilian star Neymar still has much to learn from the world's best player. Photo - Getty

But it is almost certainly in the long-term interests of the Brazilian game that Sunday's game panned out as it did. Because now there is no hiding place.

Five years ago Internacional had a ready-made excuse. The massive financial imbalance between European and South American football left them with no alternative but to fight from a trench.

That line no longer works. Brazilian clubs are benefiting from the country's economic boom. In the conditions of five years ago Neymar would already be playing his football in Europe.

In the new environment, Santos have managed to find a fortune to retain him. Since winning the Libertadores in June they have added to their squad, acquiring centre-forward Borges as well as midfielders Henrique and Ibson.

It was not economic power that tipped the balance in Yokohama. Santos were undone by a collective footballing philosophy to which, despite months of preparation, they could find no answer.

After Barcelona had beaten Al Sadd in Thursday's semi-final the Brazilian media were quick to criticise the Qatari team, casting aspersions on the fledgling nature of football in the region.

Totally forgotten was the fact that Al Sadd are Asian champions, and therefore, on paper at least, a notch above Kashiwa Reysol of Japan, who had given Santos such problems 24 hours earlier.

Come the final, the first half of Barcelona-Santos was a replica of the Al Sadd game. With the difference that since Santos had gone into the match with such expectations they were much sadder.

But the story could have a happy ending. Defeat is always an opportunity to learn, and a defeat this emphatic could serve as a turning point in the country's footballing culture.

There is much that Brazil can take from Barcelona - which does not mean slavishly copying something from outside. If anything, it means getting in touch with a lapsed tradition of intelligent, collective midfield play, of passing through the team and all over the field. It means making sure that Gabriel Hanot's words apply once more on the Brazilian side of the Atlantic.

Q) Why do you think not much effort is put in advertising Latin American clubs or tournaments in Asia? Especially when there are millions of fans here, crazy about Brazil & Argentina and have been so for decades. This could easily translate to a lot of revenue for the clubs, as some of their big European counterparts are doing.
Anirban Ghosh

A) It's an excellent point. I think Boca Juniors in Argentina are relatively advanced in terms of their global profile. But the Brazilian clubs, though they talk of 'internationalising their brand,' are missing huge opportunities.

I saw a lecture of Sao Paulo directors a few years back were they gave figures for the number of fans that cubs have. But they were only counting the fans of Brazilian clubs in Brazil, the fans of Mexican clubs in Mexico, and so on. 'How little you understand,' I thought to myself.

It's not always easy for these people to think in global terms. The big Brazilian clubs, for example, are locked into a calendar that doesn't even give them space to take part in pre-season tournaments in Europe, Asia or North America.