"It's been a big task and long work," said Fifa secretary-general Jerome Valcke last week when the calendar of the 2014 World Cup was presented. "We had 57 versions of this match schedule and finally nine on which we have been working. We took into account the medical aspects, logistics, travel and accommodation."

Staging a World Cup in a country the size of a continent is not easy, and Brazil in June/July offers a specific challenge - winter bites hard in the south and barely touches the north.

One of the big headaches in drawing up the match schedule must have been the question of how to deal with the southern host cities of Porto Alegre and Curitiba, where temperatures can drop to freezing.

It had been assumed that for practical purposes this World Cup would have to revert to the previous format, where teams would play all their group games in a certain region. This would have the advantage of reducing travel time in such a vast country - especially interesting since airport capacity has always been seen as the Achilles heel of Brazil 2014. 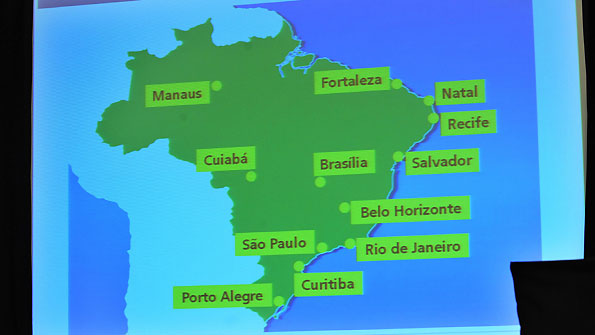 The 2014 World Cup in Brazil is spread all round the huge South American country. Photo: Getty images

But this regionalisation created a problem. Those teams based in the south would have been at a clear disadvantage. After spending weeks in the cold for their group games, a move further north in the knock-out stages could subject them to a temperature difference of 30 degrees.

This was clearly unfair - and possibly dangerous. So the idea of regionalisation was dropped, and instead all the teams will be travelling round the country - only some will be travelling a lot more than others. There are huge discrepancies in teams' itineraries.

The hosts' group is a good example. Brazil will have to clock up the air miles - indeed, one of the arguments against regionalisation was clearly the perceived need to have the national team in action in different parts of the country. So they open the tournament in Sao Paulo in the south-east, move up to Fortaleza in the north east for the second game and conclude their group programme in the middle of the country in Brasilia - a combined distance of 3,920km (2,435.8 miles) between the three cities.

Brazil's second opponents have things much easier - they stay in the north east, with games in Natal and Recife as well as Fortaleza, a combined distance of 1,160km (720.8 miles). But the other two teams in the group have to fly up to Manaus in the Amazon. Brazil's opening day opponents are especially penalized - Sao Paulo to Manaus to Recife is a combined distance of 6,000km (3,728.2 miles).

The team drawn as G1 has three group matches in cities of the north east. H1 has done even better, with fixtures in Belo Horizonte, Sao Paulo and Rio de Janeiro and a combined distance of just 700km (435 miles). While poor old E4 has two games in the cold south, and then from Curitiba faces the marathon flight north to Manaus.

They have clearly drawn the short straw. There are other long journeys but no others quite as absurd as this. It is here that the temperature differences will really bite - a problem minimized elsewhere in the schedule by downplaying the role of the south. Curitiba has the minimum host city ration of four games, all in the group phase, while Porto Alegre only has one more.

This looks like an anomaly. Porto Alegre can claim to be Brazil's third footballing city, behind Rio and Sao Paulo. At worst it is fourth, behind Belo Horizonte. And yet six cities will receive more World Cup games, including the likes of Brasilia and Fortlazea whose contribution to the Brazilian game is clearly inferior.

In Brazil this is widely being interpreted as the latest act in the cold war between Brazil's president Dilma Rousseff and controversial local football boss Ricardo Teixeira. Porto Alegre is Rousseff's political base. Cutting down its 2014 role, it is said, is Teixeira's act of revenge.

Maybe - and it is certainly worth speculating how much better the tournament planning and organisation might have been had Rousseff come to power earlier. But in this case it seems more likely that Fifa have cut back the participation of the south in order to reduce the number of games in cold temperatures - not just for the players, but also for the tourists.

Considerable thought seems to have been given to the tourist experience. There is no footballing justification whatsoever for building stadiums in Manaus and Cuiaba. But staging World Cup games there will take people close to two of Brazil's major natural attractions, respectively the Amazon rain forest and the Pantanal wetlands. Visiting those might seem a more attractive tourist package than putting on an extra two layers of clothing to cope with the cold of Porto Alegre or Curitiba .

Whatever the reasons, it is hard to look at the match schedule and not come to the conclusion that the 2014 World Cup is overblown, and that Fifa original idea of eight to 10 host cities might have been better. As it stands, with the discrepancies in distances to be travelled, the draw in December 2013 will take on extra importance. Everyone will want to be H1 or G1. No one will want to be E4.

Comments on the piece in the space provided. Questions on South American football to vickerycolumn@hotmail.com and I'll pick out a couple for next week.
From last week's postbag;

Q) I wonder if you could give me an update on the progress, or lack of it, of two so called South American wonderkids? The first is ex-Bucaramanga star Sherman Cardenas, who was supposed to be one of the great hopes of Colombian football. As far as I can tell if he was such a talent he would be a big name by now, so what happened? Was it merely a case of him being overhyped?
The second is the Chilean Nicolas Millan. I understand he is still fairly young but has he also failed to make the impact that was hoped for? Or do you think he could still be a big talent in the years to come?
Max Lintzgy

A) That 'wonderkid' tag can be so unfair - even if the talent is there then it's a lot of pressure to heap on very young shoulders. Cardenas, a little attacking midfielder at his best down the flanks, is having a good year after a few disappointing ones. Early on he was a bit part player in Junior of Barranquilla's Libertadores campaign. Recently he's been getting more of a regular game and doing well. And at 22 time is still on his side, something that applies all the more to Millan, who is only 19. He made his debut at 14, and calling him the next Cristiano Ronaldo at that time was surely unwise. He's currently on loan from Colo Colo to Naval in Chile's second division.

Q) I read that Liverpool are close to a deal with Nacional to have first option on all their young players.
Who's really benefiting here? I don't understand why Nacional would give up their young players (for lower transfer fees than if they had matured and established themselves more) and doesn't this also mean young players leaving too early in their careers?
Drew Dadds

A) Uruguayan clubs - even giants like National - don't have much choice. They're restricted by the size of the internal market (Uruguay's population is not much more than three million) which means they have to sell.
The problem is from a Liverpool point of view that very few of their products will be able to step straight into the Premier League. The trajectory of Luis Suarez - first to Ajax for a few years before the move to England - was excellent. If this deal is to work well then it will need Liverpool to be patient, and loan out the kids to clubs elsewhere in Europe before bringing them over.