The call of Ronaldinho

The semi-serious Confederations Cup aside, friendlies are all Brazil have at senior level between now and the World Cup they host in three year's time.

This is a legitimate cause for concern. Part of the story of South Africa 2010 is how well the South American qualifiers had prepared the continent's teams - all five put up a respectable showing, with Paraguay reaching the quarter finals for the first time and Uruguay, who had qualified in fifth place, reaching the semis. And one of the lessons of the recently concluded Copa America is that the next set of South American qualifiers are likely to be even more competitive.

Another lesson from the Copa is, in the current circumstances, even more unfortunate for Brazil. Because the 2011 Copa America showed that friendlies can be very unreliable witnesses.

This was most clearly seen with Argentina, whose attempt to imitate Barcelona appeared viable in warm up matches, only to be be revealed as unworkable when the real stuff started. They and their new coach Alejandro Sabella have a marathon series of qualifiers in which to whip a new team into shape. Brazil, as we have seen, only have friendlies.

At least they do have them against high prestige opponents. One of the advantages of being Brazil is that it is relatively easy to find quality sparring partners. So this Wednesday the post-Copa America phase of their World Cup build up gets underway with a trip to Stuttgart to face Germany.

The disappointing performances last month in Argentina - Brazil managed one win in four games - has cranked the pressure up a notch or two on coach Mano Menezes and his squad.

Menezes has broadly kept faith with the group he took to Argentina. Jonas of Valencia is recalled to provide the option of the extra support striker. In defence Menezes has rectified a mistake he made in the Copa - Vasco da Gama's imperious young centre back Dede should have gone to Argentina. He now comes in at the expense of Benfica's Luisao.

Midfield has seen most changes. Elano has been dropped, and Liverpool's Lucas Leiva, now the holding midfielder, is suspended after picking up a red card in the Copa quarter final. New options include Ralf of Corinthians, the dynamic Fernandinho of Shakhtar Donetsk and Bayern Munich's Luiz Gustavo, a player little known to the Brazilian public.
There is also a recall for Bayer Leverkeusen attacking midfielder Renato Augusto, at the expense of the bafflingly discarded Jadson.

Probably the best football Brazil played in the Copa came in the first half of their group game against Paraguay. Jadson, a surprise selection, looked nervy, but in flashes combined well with playmaker Paulo Henrique Ganso - one such exchange led to Jadson firing in the only goal of the first half.

On a yellow card and not far away from a red, Jadson was removed at the interval. Strangely, he did not appear again - the largely ineffective Robinho was recalled - and he has now been axed from the squad. Perhaps he was not sitting up straight during the national anthem!

A creative partner for Ganso seems like a good idea because the Santos youngster showed clearly in the Copa that he is not yet ready to carry the team on his shoulders. The languid left footer has the talent to play the killer pass, but gave the ball away time and time again because he has yet to understand the moment to try it.

Hyped to the hills by the local press, the danger now is of an anti-Ganso backlash setting in. If so, it will be a case of a player paying the price for being declared a reality when he is still nothing more than a promise.

The Brazilian media were so keen to love him because it had been so long since the country had produced a player of his type. And because there seemed to be no other option for the number ten shirt. But a new one has emerged - or rather, an old one has re-emerged. 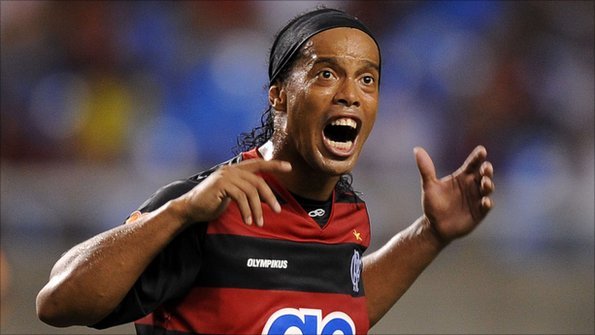 Ronaldinho has been in fine form for Flamengo. Photo: Getty

Top scorer in the current Brazilian championship is twice former FIFA World Player of the Year, Ronaldinho. After sleepwalking his way through the last five years, the ex-Barcelona great has woken up. His coach at Flamengo Vanderlei Luxemburgo may have performed a masterstroke in mid-June, when he substituted Ronaldinho with two minutes remaining in a match purely so the player could be booed by his own fans. It was cruel medicine, but maybe a dose of public humiliation was what was needed.

Since then it has been a different story. True, Ronaldinho is not the player he once was. That burning acceleration has gone. But Luxemburgo has taken this into consideration and moved him higher up the field, closer to the opposing goal, where with a mixture of cunning and talent Ronaldinho has been scoring and setting up chances for others.
On Saturday he made space beautifully in the last minute against Coritiba and curled in a precise cross which led to the only goal of the game, taking Flamengo to the top of the table - and Flamengo's millions of fans constitute a powerful lobby in favour of a player seeking a Brazil recall.

Of course there are serious doubts as to whether the 31 year old Ronaldinho can still tip the balance at international level - and still more serious ones about his ability to do so in a World Cup which is still three years away. But if he keeps up his club form then it will be hard to ignore his claims. Mano Menezes, though, is unable to test him in a competitive environment - friendlies, those unreliable witnesses, are all that is available.

Comments on the piece in the space available. Questions on South American football to vickerycolumn@hotmail.com, and I'll pick out a couple for next week.
From last week's postbag;

Q) As a Venezuelan, I have to ask: where this national side is going? I know you've mentioned before the unique set up where Farias coaches the youngsters as well as the senior side; but what do you think of the squad that just finished fourth in South America? Is it a farce? Was it just a reflection on the poor quality of football on display? Or could this team actually have a chance of qualifying for their first ever World Cup in 2014?
Diego Pacheco

A) Nothing farcical about it at all, and I don't agree that the standard in the Copa was so low. It wasn't always great from the point of view of spectacle, but in some ways it was the best Copa ever, because the quality of all ten South American teams has never been higher - as shown by the remarkable progress made by Venezuela.

They are certainly in with a chance of making 2014 - but then again, so is everyone else, even Bolivia, backed by the altitude of La Paz.

Specifically about Venezuela, what is so impressive about them is that now they haven't just got a team. They have a squad. Farias is feeding through players from the 2009 World Youth Cup side - Yohandri Orozco looks like the genuine article, as long as he doesn't suffer from moving to Europe so early he looks like a gem for years ahead.. I'm optimistic of their 2014 chances - but let's see how they deal with all these new expectations.

Q) What happened to ex-Brazil striker Rafael Sobis? He's In the Middle-East? Saw a bit of him at Internacional and he was a genuine prospect. Sharp, feisty, clever no10 / second striker with a fantastic shot on him. Guess Betis is a bit of a graveyard for promising Brazilian talent.
Andre Stephens

A) I too once saw him as one for the future when he was making his name with Internacional. He's back in Brazil after an injury hit time with Al Jazira. He went back to Inter, but it didn't really work out and he's now joined Fluminense where he's in the early stages of trying to establish himself. He's only 26, so there should still be plenty more to come.