Batista must have thought he was safe as houses

Just before the Copa America he signed a contract to be Argentina boss in the coming set of World Cup qualifiers. Argentina had not sacked a coach in decades - either they had resigned or had reached the end of their contract. Why would it be any different now?

On his record over the past year, Sergio Batista is unfortunate to have been ousted - with former Leeds and Sheffield United midfielder Alejandro Sabella lined up to replace him.

True, the Copa did not go as planned, with the hosts knocked out on penalties in the quarter-finals by eventual winners Uruguay. Batista's plans to form a Buenos Aires imitation Barcelona clearly did not work, and he had to rethink his team after two disappointing draws.

But it is easy to be wise after the event. He was perfectly entitled to try out the system, with Lionel Messi in his club 'false number nine' position.

The evidence from friendlies was promising - Batista's team thrashed Spain, beat Brazil and Portugal and at the end of March produced a dazzling first half against the USA.

Then in the Copa, forced to rebuild his team in a hurry, Batista clearly improved things. Certain selections could be queried, but there were no glaring omissions in his squad, and his side undoubtedly deserved to win their quarter-final. 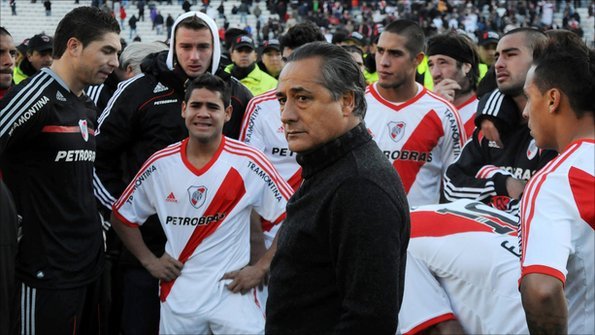 River Plate have been given a reprieve with the merger of the top two divisions. Photo: Getty

Essentially, Batista has been sacked because Carlos Tevez had his penalty saved in the shoot-out - but more fundamentally, he has gone because it is electoral year in the Argentine FA. This is the factor that forced the change.

Julio Grondona, president for 32 years, is hungry for more, which means that he has to play to the gallery. His constituency is the club presidents.

This is a moment where Grondona is careful to give them what they want. They wanted Batista out, and so out he goes.

But a switch of national team coach is far from being the most significant change taking place in Argentine football as a result of the fact that Grondona is seeking another term.

Electoral year also provides the backdrop for the plan to merge Argentina's first and second divisions into a giant 38-team structure in a new-look league to kick off in a year's time.

The immediate suspicion raised was that this is a manoeuvre to reinstate River Plate in the first division.

The Buenos Aires giants were relegated a month ago, and now have an automatic pass back - providing the unthinkable does not happen and they do not drop to the third this season.

Indeed, the River Plate situation has given an extra urgency to the project. But it does not explain why last Monday 15 first division clubs voted in favour. The political attractiveness of the plan lies in the fact that it offers something for nearly everyone.

The big traditional clubs of Buenos Aires had a shock with River's relegation. Other giants, such as Boca Juniors and Independiente, were looking over their shoulders. They can now feel protected.

But the project is being sold as a profound shift in the direction of decentralising Argentine football, of limiting the historic domination of Buenos Aires by letting the provinces come to the party.

The easy response is that this is happening anyway. As this column has mentioned before, Godoy Cruz of Mendoza, near the Chilean border, have in the last three years taken big strides towards establishing themselves in the first division.

And all four promoted clubs this season are from the provinces - exemplified by River Plate's play-off defeat at the hands of Belgrano of Cordoba.

This huge expansion of the first division, then, protects the Buenos Aires clubs from the rise of the provinces, while also offering more provincial teams a shot at glory - as I say, there is something for everyone.

Except, perhaps, for those who believe in quality. Even with 20 clubs, the standard of the Argentine first division has not been high in recent years, as seen by the generally disappointing performance of the country's representatives in the Copa Libertadores, South America's Champions League.

An increase to 38 clubs would seem to be a charter for generalised mediocrity.

It is interesting that one of the four clubs who did not back the proposal were the current champions Velez Sarsfield. Widely seen as the best run club in the country, Velez have grown and grown in recent years, with a model based on good youth development and sound financial administration.

They are a club striving for excellence, and they seem unconvinced by the new formula for football in the country.

For the moment they are swimming against the tide. In addition to the other clubs, Argentina's government appear in favour of the scheme - a vital detail since the TV rights are state owned.

It is election year in the formal political structure as well, so presumably a calculation has been made that there are votes to be gained from the expansion of the first division.

But for how long? Is this new model viable in the long term?

There are clear problems. One is the fact that at the moment there are no visiting supporters in the second division - the stadiums are not seen as good enough to deal with the country's problem of fan violence.

It is hoped that a new system of personalised ID cards for supporters will save the situation - a technological solution in which the present writer has little confidence.

There is also the problem of the sheer number of meaningless games. The suggestion is as follows - in the first half of the season the teams are divided into two groups of 19.

After the league phase, the top 19 go into another league to spend the second half battling for the title, while the rest are playing to avoid relegation. In practice this could well be unwieldy and dull.

Even in theory it is not going down very well. If enough club presidents feel that their supporters are not in favour then there could even be a rethink before October's assembly - but nothing that will getm Sergio Batista his old job back.

Q) When watching the impressive Diego Lugano captain Uruguay to victory in the Copa America I began to reflect on his career so far. I remember following him during his days at Sao Paulo and a move to Italy or Spain seemed almost inevitable - then he inexplicably chose Fenerbahçe in Turkey where he has remained to this day. At this point in his career do you still think there's still a chance we'll see him playing in a more prestigious league?
Scott Spires

A) I think time has passed him by with that one - he's 30 now and he wasn't the quickest to start with. The funniest moment of Uruguay's celebrations was when ther big striker Sebastian Abreu was cracking jokes about the irony of Lugano, in his capacity as team captain, receiving the Fair Play award that Uruguay also won in the Copa America. Put him in a quicker league and he could well be a red card waiting to happen.

Q) I've been living in Chile for several years now and follow the national team closely. I would be very interested to hear your thoughts on Jorge Valdivia.
For me, Valdivia added a touch of class to the Chile team when he came on as a sub for Chile. He actually seems more effective (as a game changer) than the much-touted Sanchez (although, of course, a very different style of player). He certainly seems better than Matiás Fernandez at delivering the killer pass. I'm surprised no European / British teams have been sniffing around after him. Do you think this is because of passed discipline issues, fitness, or because he's considered too much of a luxury?
Andrew Wood

A) He's a lovely player to watch, a little twinkle-toed playmaker, but I think you've gone way too far placing him above Sanchez or even Mati Fernandez, whose injury was such a blow to Chile's Copa campaign.
He's back in Brazil with Palmeiras, where there are fans that love him, and others who consider him a luxury, thinking that, for some of the reasons you cite, his cost/benefit is not good.
He had a brief foray into Europe - Rayo Vallecano and Sevette. He's now coming up 28 and it's difficult to imagine him going across the Atlantic again.