One of my favourite pieces of football writing is by the splendid Argentine coach Angel Cappa, a romantic of the old school, reflecting on his good fortune at being in Spain to watch Brazil’s midfield in the 1982 World Cup.

“The ball arrived in this zone [midfield],” he wrote, “and would then disappear to reappear in the form of a rabbit and also a dove and then was hidden again from anguished opponents who would look for it in the most unlikely places without being able to find it….

"The crowd, myself included, looked at the watch with the intention of making time stand still because we all wanted the game to last for ever.”

Since then, though, no one has really been able to write about Brazil in quite the same terms. Not through any lack of quality - in the last 30 years the production line of great attacking full backs and magnificent strikers has been working overtime. 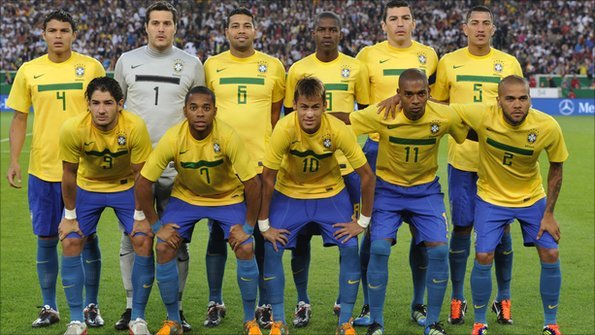 But the game has never flowed through the midfield with the same magic, because that has not been the objective.

For many Brazilian coaches, the failure of that 1982 side to win the World Cup (they lost to Italy) served as proof for ideas that had been kicking around for a while - starting with a 5-1 massacre at the hands of Belgium in 1963, confirmed by the defeat by Holland in the 1974 World Cup.

The physical development of the game, it was thought, meant that traditional methods had to be revised. Brazilian players had to bulk up - Rubens Minelli, the most successful domestic coach of the 70s, wanted his team to be made up of six footers.

And with less space on the field, the future of football lay in the counter attack, rather than elaborate attempts to pass through midfield.

These thoughts have carried a lot of weight in the Brazilian game. They help explain why a succession of Brazil sides have caught the eye for explosive breaks down the flanks rather than for the succession of midfield triangles that enraptured Cappa and everyone else in 1982.

When former Middlesbrough left-back Branco was in charge of Brazil’s youth sides, he told me that right from the start of the process the search for big, strong youngsters was a priority. Brazilian coaches, meanwhile, became fond of spouting the statistic that the chances of a goal are reduced if the move contains more than seven passes.

And then along came the Barcelona/Spain school, with its little Xavis and Iniestas and its focus on possession of the ball - and its accumulation of trophies. Had not Brazilian football declared such players and such methods obsolete?

Once a star with both Brazil and Barcelona, Rivaldo recently made clear the distance that has grown between the two schools. His old team-mate Pep Guardiola, he said, had built a Barcelona team in his own image, giving his players "the tranquillity to go anywhere, even Real Madrid away, and keep passing the ball, irritating the opponents.

"A time will come when they will be able to slip someone through on goal and score. This is down to him, because he transmits this idea to the players and then trains it, something that you don’t see in Brazil.

"I visited Barcelona and watched a training session. Here [in Brazil] if you try to train retaining possession of the ball, the players don’t like it. I see people talking about the way that Barcelona play the ball around, but here in Brazil everyone wants to get the ball and charge forward."

These are fascinating observations, which perhaps help explain why Brazil are in an awkward moment of transition.

The official line is that Brazil are trying to wean themselves off an excessive dependence on the counter- attack. Coach Mano Menezes declared as such when he took over a year ago, and there is sound thinking behind the attempt to change direction - or perhaps, to turn the clock back.

First, there is the need to gain full advantage from playing at home in the 2014 World Cup. The local crowd will react better to a style of play more in line with the traditional virtues of the Brazilian game.

Second, on home ground no one will offer Brazil the opportunity to counter attack. Something more expansive will be necessary.

But can Brazil currently count on the players with the skills and ideas to put this change of direction into practice? Today’s players, of course, are far too young to have seen the 1982 side.

On Sunday Brazil met Spain in Colombia in the quarter finals of the World Youth Cup. Before the match Brazil boss Ney Franco, hand picked by Menezes to take charge of the Under-20s, paid tribute to the style of the opponents, but added that “Spain are not exactly a reference - it’s enough to remember our team of 82.”

The game that followed was a minor classic because of the clash of styles. Before tiredness muddied the waters, the pattern of the game was clear.

Spain were more like the Brazil of 82, with their carefree passing. Brazil had aspects of that year’s Italy, ruthless on the break. They won on penalties after an exhilarating 2-2 draw.

It was the type of game that made me lament all the more that the senior teams did not meet in either the 2009 Confederations Cup or last year’s World Cup. Puncher versus counter-puncher often makes for a great spectacle.

Should they meet in 2014, Brazil’s idea, as we have seen, is that there shall not be such a clash of styles. That is, assuming that Mano Menezes keeps his job, and that he keeps his nerve.

Losses in recent months to Argentina and France were followed by a disappointing Copa America.

Attempts to play a more elaborate passing game have not been entirely convincing. And so for last week’s friendly away to Germany he surprisingly dropped his playmaker Paulo Henrique Ganso and selected a midfield that left his team with no other option but the counter-attack. It didn’t work and probably did not deserve to.

The margin of defeat was wider than the 3-2 scoreline might suggest.

After the game Menezes commented that his team were not yet ready to trade toe-to-toe with Germany, who were not even at full strength.

Does this mean that, under pressure, Brazil’s coach is losing faith in his team’s capacity to recapture the swagger of its predecessors that was eulogised with such eloquence by Angel Cappa?

Comments on the piece in the space provided. Questions on South American football to vickerycolumn@hotmail.com, and I’ll pick out a couple for next week.
From last week’s postbag;

Q) It has always surprised me that the legend of Argentinean football Carlos Bianchi has never taken the role of coach of the national team. His CV is simply outstanding having won 7 league titles and 4 Copa Libertadores as well as a host of intercontinental cups. As manager of Boca he oversaw the development of the likes of Riquelme, Tevez, Samuel and Palermo into world class players and having been a former great international player himself he appears the perfect candidate to lead Argentina to World Cup Glory.
Why hasn't he ever managed Argentina? Is it a personal reason or do the Argentine FA not rate him for some reason?
Monty Hallaq

A) There’s thought to be some bad blood between him and Julio Grondona, the long term head of the Argentine FA. But there have been times in the past when of his own accord he ruled himself out of contention.

He hasn’t coached for a while, and it’s worth remembering that his spells in Europe, with Roma and Atletico Madrid, were not a success.

His club record in Argentina is indeed wonderful. The national team is a different challenge, though, and I’m not entirely convinced. He’s an organised, methodical type, perhaps the kind of coach who’s much better suited to the club game. I’m not sure he could adapt well to not having daily contact with players and the chance to drill repeatedly on the training ground.


Q) In the World Youth Cup I recently looked up to see who had qualified for the quarter-finals, and ONCE AGAIN, South America is well represented (Brazil, Colombia, Argentina). What do you think about that?
Jini Twahirwa Sebakunzi

A) Only Brazil are left in the semis, and they only qualified on penalties - which has confirmed my feeling that this year’s is not a vintage crop from the continent.

Nevertheless, having three in the last eight is in indication of how seriously the Under-20 teams are taken in South America.

They are seen as a key conveyor belt to the senior side. More important than winning titles at this level is grooming players, and on tis count I think Ecuador have plenty to be pleased about in the current tournament.

By all accounts they were unlucky not to beat France and reach the quarter finals, and I think there are a few players in their team who in a few years time might be featuring in the senior side.