Are Argentina better off without Tevez?

The stocky shadow of Carlos Tevez is likely to be cast all over the Copa America in Argentina this July.

The Manchester City striker will almost certainly not be picked for the tournament as Argentina coach Sergio Batista is apparently building a side without him.

He is attempting to create an imitation Barcelona, with Lionel Messi in the 'false number nine' role that Pep Guardiola invented for him with the Catalan club. The back-up is to use Gonzalo Higuain of Real Madrid as a target man striker.

Tevez, then, is not in the frame in his favourite centre forward role, and he is not a flank flier like Ezequiel Lavezzi and Angel Di Maria, Batista's other strikers in his 4-3-3 foprmation - though it would be no surprise if Sergio Aguero were to force his way in and play the David Villa role in Batista's Buenos Aires Barcelona.

And if Tevez is not going to be in the starting line-up, having him in the squad carries an obvious risk.

As fans of most of the teams he has played for can testify, Tevez is a moaner.

He never seems entirely happy anywhere. The glass is not only half empty, it is chipped as well. 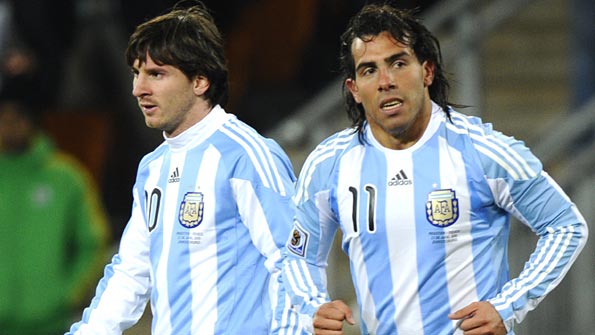 Can Argentina accommodate the different styles and strengths of Messi (left) and Tevez? Photo: Getty

Stuck on the bench, sulking on the sidelines, such a player can contaminate the team environment. A few months ago, Tevez mused about retiring from international football - and Batista needs people committed to the collective cause as he goes in search of Argentina's first senior title in 18 years.

And there is something else. Tevez also finds himself in the middle of the cold war between Batista and his immediate predecessor as coach of Argentina, a certain Diego Armando Maradona.

In recent times, no Argentina coach has had a reign as short as Maradona's 20-month rollercoaster. He walked into a trap when he took the job, if it worked, Argentina's eternal FA president Julio Grondona could claim the credit. If it failed, then Grondona had drawn the sting of a potentially uncontrollable critic.

Maradona took over a team in crisis, with one win in its previous seven World Cup qualifiers. Looked at in that light, he did a reasonable job getting the team to South Africa. Perhaps inevitably in the circumstances, the team he built was cautious and counter-attacking - one where he had to leave out Carlos Tevez.

The striker's poor run of form was one of the reasons Argentina were struggling. Twice in the campaign he was sent off in the first half. In all, he started 11 games, coming on once as a substitute - a managed just a single tap-in goal.

Indeed, his international record is unimpressive - 12 goals in 60 games. But Tevez and Maradona share a bond, they were both poor boys a 'born on the wrong side of the tracks' in Buenos Aries tracks, who went on to shine for Boca Juniors.

Crisis averted, Argentina safely in South Africa, Maradona could not resist the temptation. On the eve of the competition, Tevez was reinstated, a move which ended up de-structuring the team and leaving it wide open for the counter-attacks of the Germans.

The Veron-Messi link was sacrificed - and since Veron was also the man to head away set pieces at the near post, this also led to a defensive weakness which the Germans exposed within five minutes.

The long diagonal ball to Di Maria was forgotten, and Messi had to drop deep to initiate the play. Maradona destroyed his own ideas as a result of an emotional commitment to Tevez.

That bond is still intact. Tevez was the one player to protest openly about Maradona's sacking. Meanwhile, Batista and Maradona, old friends and teammates, were now feuding. "I'm low profile," said Batista, in an obvious jibe at his predecessor. "It's easy for Batista to be low profile," said Maradona. "If he so much as crosses the border and goes to Uruguay no one knows who he is."

Last week, Maradona was on the attack once more. Batista, he said, must be drunk if he is thinking of leaving out Tevez. 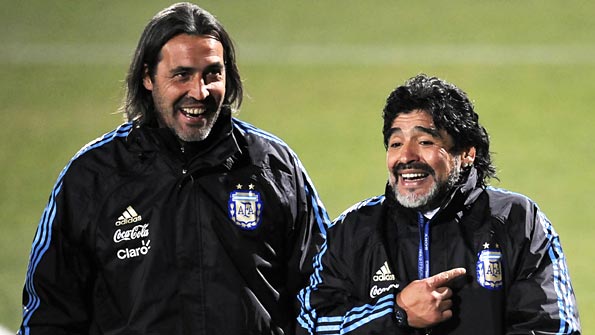 The once-friendly relationship between Batista and Maradona has deteriorated. Photo: Getty

Batista, meanwhile was saying that he had been too busy to bother watching Tevez knock in two screamers against Stoke City. Since then, though, he has carried out something of a strategic retreat - which is probably good politics, because Maradona is far from the only one in Argentina with a special weakness for Tevez.

Messi can stress as often as he likes that he is a fan of Newells Old Boys, he is from Rosario and he is an Argentine. But there is inevitably a certain distance between him and the people in the land of his birth.

Argentines are fiercely proud of his success, but every disappointing performance with the national team causes some to proclaim that Messi has become primarily a Catalan.

There are no such strains on their relationship with Tevez, even though the player has spent six years abroad. Before that he starred week in, week out with Boca Juniors, the most popular club in the country. He still bears the scars of his underprivileged upbringing.

People can find plenty to identify with in his defiant 'take me as you find me' approach. Messi might clearly be the better player, but in a run-off for the title of 'Argentine Idol,' Tevez would be in it to win it.

For this reason, Batista changed his tune. By the end of the week he confessed that he had been wrong not to visit Tevez when he recently sat down with some of his players on a brief European tour.

He also stressed that the door is not closed, and that even if Tevez is not called up for the Copa America, he may well return for the subsequent World Cup qualifiers.

In July, Argentina will be under plenty of pressure to bring their long dry run to an end. If things go wrong, then the absence of Tevez will be used a stick to beat Batista and his players.

If there is a risk in taking Tevez to the Copa America, then there is also a risk in leaving him out.

Comment on this blog below. Questions on South American football to vickerycolumn@hotmail.com, and I'll pick out a couple for next week.

Q) I just wanted to ask about Brazilian footballer Jardel. I remember him at Porto, Galatasaray and Sporting as someone who banged in goal after goal after goal. I understand he was hugely successful at Vasco and Gremio as well and I remember some truly great finishing during his time in Europe.

He later appeared at Bolton for a short failed stint before moving on to various clubs around the world before playing again in the lower leagues in South America.

In my opinion he was a truly remarkable talent with a goal scoring ability that could have matched Romario - his decline of course coincided with being left out of the 2002 World Cup squad and he's never been a player of any merit since.
Why on earth was he left out of that squad ?
Dan Ray

A) A lesson in the need to have mind and body together in order to shine at the top level.

Target men centre forwards are not always the most popular type of player in Brazil.

Jardel was hated at Vasco and only flowered when he went to play for Gremio under Scolari, who kept arguing that he should have been in the Brazil squad.

Then in 2001 Scolari became coach of Brazil, called him up - and immediately slung him out. Already he was not the same player. I believe he suffered some psychological problems after the break up of a relationship, he lost physical sharpness, and, in fairness, he really didn't have the ability of a Romario to fall back on.

Q) There have been rumours on the internet that Arsenal have made a pre-contract agreement with Velez Sarsfield for their 23-year-old attacking midfielder Ricky Alvarez. If this is true, could he be a successful player for Arsenal, and what do you make of him?
Yousef Teclab

A) I like him. Lanky left footed midfielder with some class about him. No express pace for a wide role, but can tuck in and shoots well. He has had some injury problems, though.