It is too soon to know where he is going to end up in the pantheon, but Lionel Messi's performance on Saturday ensures beyond all doubt that he belongs among the all time greats.

Watching him scale the heights has given me particular pleasure because I had the good fortune to be there at the start of the journey, the moment when he first appeared before a mass public.

The event was the South American Under-20 Championships, staged in Colombia at the start of 2005. 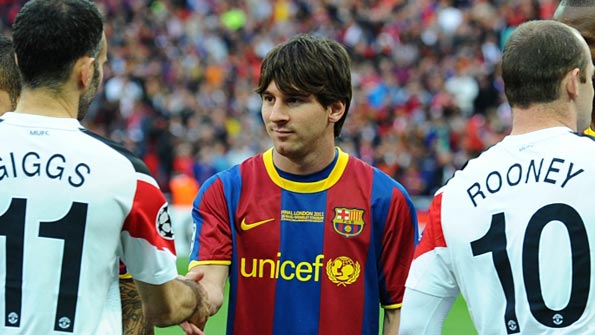 Messi has shown he can flourish in European football. Photo: Getty

Messi had already been with Barcelona for four years, had played one friendly in the first team and there were rumours that he might be something special. But he was barely known in Argentina, who called him up with the aim of having a look at him - he was, for example, not given the symbolic number 10 shirt.

He looked unimpressive as he took the field, small, pale and shambling. But as soon as he was on the ball all of us there knew we were witnessing something special.

He was only 17, a couple of years younger than almost everyone else, and he found the competition's gruelling calendar hard going.

But the talent was unmistakable. As Diego Maradona commented, Messi's close control is so abnormally good that he can run with the ball while watching TV - he has now reached a level where could probably change the channels as well.

As well as his slalom dribbles, back in 2005 Messi was already showcasing his ability to cut in on the diagonal, exchanging beautifully weighted give-and-go passes. He looked like a sure fit for global stardom.

But there are always causes for concern, forks in the road where potential can go astray.

I well recall being in Paraguay for the 1999 Copa America when 16-year-old Jhonnier Montano scored a cracking goal against Argentina. He was so full of talent, and cut such a composed figure in the post-match media conference, that he gave the impression of being another dead cert.

But it never happened for him. After a spell in Turkey he is now heading back to Peru, the country where he has enjoyed a touch of success in recent years.

It is better than nothing, but measured against his promise, it is as if his career has turned into a line from "Do You Know the Way to San Jose?" - the one about "all the stars who never were [who] are parking cars and pumping gas."

Clearly, part of Montano's problem was the premature move to Europe. Parma bought him, then loaned him here and loaned him there. The clubs who took him were fighting against relegation and had no stake in his development, so opportunities were few and momentum became non existent. His weight ballooned, his mind wandered and he fell by the wayside.

This, then, was my fear for Messi back in 2005 - that being at Barcelona might make it hard for him to get a regular game. I need not have worried. Before the end of the year he was a household name.

In fact, moving across the Atlantic so early almost certainly proved to be an advantage in his case. He went through the entire process of adolescence in Barcelona. It was where he developed as a man and as a team player.

But his footballing identity, his skill in one-against-one situations - this had already been formed in Rosario. Messi, then, has developed into a perfect synthesis of the Argentine kick-about and the Barcelona academy.

Those South Americans who make the move a few years later, like Montano, face added risks. Eighteen, for example, is a time of changes - especially for footballers, who in behavioural terms tend to go through adolescence later then their contemporaries.

It is a time of life that can be disorientating enough, without the added complication of experiencing it in a foreign culture. Throw in the difficulties of adapting to a different type of football, and it is little wonder that there are casualties.

But the road to the top is always rocky, no matter what path is chosen. Staying at home a few extra years has its advantages, but also its potential pitfalls. There are first-team opportunities in a familiar environment - the flipside of the coin is the relative ease with which premature reputations can be constructed.

It is just over two years since I first saw Neymar in the flesh. Recently turned 17, he came off the bench for the last few minutes with his Santos team leading Fluminense 2-1. By the end it was 4-1.

He set one up with a gorgeous, defence-splitting pass, and the other came from a rebound after the keeper failed to hold his shot. In between the two, his dribbling skills forced a red card for the Fluminense right back. It was a sensational seven minutes. Before long he was being proclaimed as a phenomenon and there were calls for his inclusion in last year's World Cup squad.

The problem here is that domestic Brazilian football dances to its own beat. The defensive lines play deep, so there is space on the field. Today's referees will give fouls for anything and diving is tolerated - a scenario which fills the dribbler with confidence. Take him out of the protective bubble and it can be a different story - Robinho is a perfect example, a player whose fighting spirit seems to shrink in front of your eyes when he does not get the fouls he used to be awarded in Brazil.

The problem here is that Neymar is a child of the contemporary criteria of Brazilian referees, a fruit of the poisoned tree. I have never seen a player who dives so often and so theatrically. This is clearly an impediment in his quest to reach the level of play that Lionel Messi showed on Saturday, and there is another one. 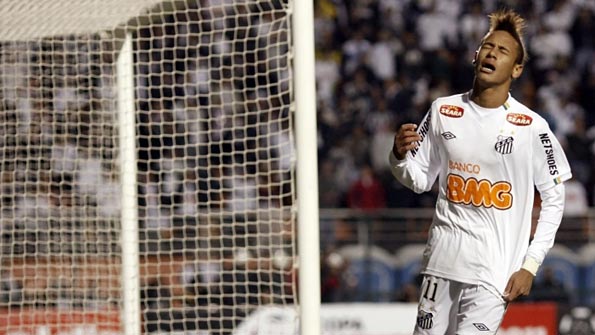 Neymar still has work to do on his game. Photo: Reuters

The Boy Prince of the Brazilian game, there is something of the spoilt brat about Neymar. He can scream and shout when he does not get his way, and also lose his focus. Against Argentina, in the big game of the recent South American Under-20 Championships, he was too busy diving and arguing to play much football.

But this is a work in progress. The current Copa Libertadores campaign could go down as the moment when the boy prince shows that he is prepared to become king.

This week Santos hope to book their place in the final. In the last few games Neymar has shown less petulance, done less diving and played some wonderful stuff - gliding past his marker on either side, showing vision and intelligence plus his trademark cool finishing.

He is a special talent. The tests are going to get tougher as he moves up, but his journey will be well worth following. If everything falls into place, if he can keep learning and adapting, then he might be able to shine on the stage that Lionel Messi lit up on Saturday.

Please leave comments on the piece in the space provided. Send questions on South American football to vickerycolumn@hotmail.com, and I'll pick out a couple for next week.

Q) I was wondering what happened to the Brazilian winger Mancini? I remember him doing very well at Roma, but he seems to have disappeared after a bad spell at Inter Milan?
Arthur Li

A) He's back in Brazil with Atletico Mineiro. He's had a bizarre career. He was a promising but error-prone, unconfident right back until suddenly exploding as a goalscoring threat in 2002 with Atletico. He then moved off to Italy, where he was reinvented as a wide attacker, had some glory years, was briefly in the Brazil squad, and then he fell back again.