It was a miracle of Marlon de Jesus - and I am still trying to work out how he managed to miss the target.

Last Thursday, in the South American Under-20 Championships, Ecuador's burly striker Edson Montano burst through the right of the Uruguay defence, got to the byline and rolled the ball square to the equally burly De Jesus, who, positioned no more than three metres from the goal, contrived to shoot over the bar.

It is a trick he would probably be unable to repeat if he tried.

The game situation made the miss all the more astonishing. It came in the 88th minute of a hard fought 1-1 draw. The consequences are apparent from a glance at the tournament table. The six remaining sides in the competition are playing off for various prizes. As usual, the top four will qualify for the World Youth Cup. But, since the scrapping of the Under-23 championships, the top two will also qualify for the 2012 Olympic football tournament, which is a big deal in this part of the world. 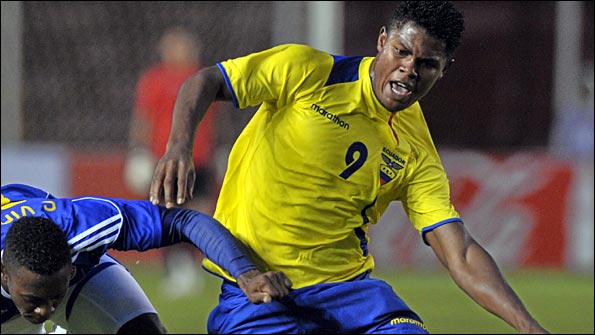 With two rounds to go, Ecuador are fourth, behind Argentina, Brazil and leaders Uruguay. Had De Jesus been more accurate, Ecuador would be topping the group.

Worlds can change on such slips. Four years ago, Uruguay and Argentina met in the last round to decide who would join Brazil at the 2008 Olympics in Beijing. Uruguay only needed a draw. They had most of the chances and were looking comfortable. Late on, as Argentina pushed up, a long punt put Uruguay striker Elias Figueroa behind the opposition defence. All he had to do was bring the ball under control and he would have found himself with only the keeper to beat. But the ball bobbled away and the chance was gone. It hardly seemed to matter. But then, deep into injury time, Argentina won a corner on the left and Lautaro Acosta, one of the smallest men on the field, rose to head down and in. A year and a half later, Argentina went to the Olympics.

By then, 1986 World Cup-winning midfielder Sergio Batista was in charge of Argentina's youth sides. He took the team to the Beijing Games and came back with the gold medal. That triumph gave Batista the credibility to take over the senior Argentina side last year. But had Figueroa's control been better and if Acosta had not got his head to the ball, someone else would probably be coaching Lionel Messi and the rest of the Argentina side that take on Portugal this Wednesday.

Might that miss of De Jesus have similar significance? It certainly makes it tough for Ecuador to qualify for the London Games. They will hope to beat Chile in Saturday's final round but, to be sure of an Olympic place, they may well have to beat Brazil on Wednesday - and Brazil will be stung by losing to Argentina on Sunday. Admittedly, Brazil will be without Neymar. The tournament's outstanding talent showed plenty of the petulant side of his nature against Argentina and is suspended after picking up a second yellow card. Even so, Ecuador will go into the game as underdogs.

Whatever happens in the closing two rounds, posterity could well declare Ecuador the real winners of the 2011 South American Under-20 Championships. Because the real aim of all of this is not to qualify for the Olympics or go on to win the World Youth Cup. The real purpose is to help groom players for the senior national team.

And on the evidence so far, Ecuador would seem to be in good shape. More than any other team in the tournament, it is possible to imagine several of the Ecuador players taking the big step up in the future. This is vital because Ecuador have come a long way in a short space of time. As recently as the 1980s, they were whipping boys on their own continent. In 2006, they were in the world's last 16.

But the danger signs are obvious. Ecuador need only look to their neighbours. Peru made their breakthrough in the 1970s, then slid back. Colombian football promised so much in the late 1980s and early 1990s, then went into decline. In both cases, one spontaneous generation had broken through, caught the world's attention and then not been replaced. And both countries can draw on populations far bigger than Ecuador's. 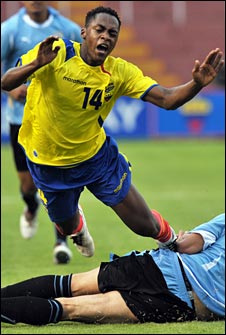 A golden generation took Ecuador to the World Cups of 2002 and 2006. Some of the current Under-20 team might be able to replace them. Goalkeeping, for example, has not been an Ecuadorian speciality but John Jaramillo is looking very safe. In front of him, captain Dennys Quinonez has a claim to be the centre-back of this Under-20 tournament. His reading of the game and anticipation have been excellent, while he forms an effective partnership with the taller, cruder John Narvaez.

Combative and with a fine range of passing, Fernando Gaibor is as good a central midfielder as any on show, while there are two interesting speed merchants on the flanks - Alex Ibarra (pictured) on the right and Marcos Caicedo on the left - although their pace can be negated. On Sunday, Colombia did it by defending deep. Still, Ecuador have more ball-playing options in Juan Cazares, who is with River Plate in Argentina, and the left-footed Jonathan De La Cruz. Up front, there is the strong man duo of Montano and De Jesus.

Of course, not all of them will come through but De Jesus is a great hope. He played in the previous version of this tournament two years ago, scored plenty of goals last year for his club, El Nacional in Quito, and made a couple of substitute appearances for the senior side last September. He was injured in the opening game of the current tournament and was still feeling his way back when he came on as a substitute against Uruguay. But he appears to have many years ahead of him and hopefully many chances to wipe out the memory of that extraordinary miss.

Q) I'd like to ask about Blackburn Rovers' new signing from Newell's Old Boys, Mauro Formica. I've never seen him play - although I knew the name - and was wondering if you can give us Blackburn fans an idea if what to expect. Also, do you think he can adapt quickly to life in the Premiership? Has he moved at the right time?
Matt Gregory

A) I'm told that Blackburn's coach compared him to Gabriel Batistuta, which is wide of the mark, because Formica is an attacking midfielder. The comparison which has always hung around Formica - Ariel Ortega coined it - is with Kaka. There is something in it. Formica has that capacity to launch surging runs from the middle of the pitch and can shoot with venom off either foot. I like him a lot but I'm not convinced that the Premier League is ideal for him at this stage - the space he likes to operate in is going to get squeezed. And Formica hasn't filled out as much as Kaka did. Still, I think he's more suited to English football than Carlos Villanueva, the talented Chilean playmaker who had a spell with Blackburn.

Q) Whatever happened to Elano? He was sublime in his first season for Man City but only showed glimpses of his class from there. Didn't hear much of him after he moved to Turkey but he had a good World Cup before he got injured and now he's back in Brazil? Backwards step maybe?
Jordan Cooper

A) He's had a strange club career - and not just in Europe. Before he came good with Santos, there were times when he couldn't get a game with Guarani. I'm not sure rejoining Santos is a backward step. They have some wonderful young players and they are the team that everyone will want to see in the Copa Libertadores. The idea of playing a wise old head in a side like that must be very attractive, especially with the salaries that Brazilian football is currently paying to big names.