Debutants in the Libertadores spotlight

Of the field of 32 teams in South America's Copa Libertadores, only two have not yet been in action in the group phase - and the pair are among the most famous names in the competition's history.

Independiente of Argentina have a record seven titles to their name. Uruguay's Penarol are five times champions and were winners of the first version back in 1960. Neither club have lifted the trophy since 1987 but they have won nearly a quarter of all the Libertadores titles between them.

And they meet on Thursday.

Independiente have already been in action, creeping past Ecuador's Deportivo Quito in the qualifying round. Inaugural champions Penarol are therefore the final team to make their debut. In the 2011 Libertadores, the first shall be last.

The spotlight has been on the debutants so far. Last November, this column looked at the chances of Godoy Cruz striking a rare blow for provincial Argentine clubs by qualifying for their first Libertadores.

The men from Mendoza, near the border with Chile, made it through but then lost star man David Ramirez, perhaps the outstanding player in Argentina last year, and their coach. Ramirez moved to Buenos Aires to join Velez Sarsfield, for whom, incidentally, he scored a cracker against Caracas on Tuesday. The game also witnessed a serious shoulder injury to team-mate Guillermo Franco, recently of West Ham.

How would Godoy Cruz get on without Ramirez? Their first match was at home to LDU Quito of Ecuador, experienced campaigners and 2008 champions. There was plenty of optimism from the home fans inside the stadium last Thursday. Fireworks were set off before kick-off to mark the occasion and again in the closing minutes with the hosts 2-1 up. It might have been premature. Second-half stoppage time was eventful. LDU had a man sent off but still had time and strength to set up two clear chances. Both were squandered, which meant the Godoy Cruz celebrations could start in earnest.

No such luck for Leon de Huanuco, the Peruvian club who featured in this column in December following a magnificent gesture from their coach, Franco Navarro. In the decisive second leg of the final of the Peruvian championship, Navarro refused to select one of his best players, who had been unjustly reprieved from suspension after being sent off in the first leg. Leon lost the match but won friends - and at least they had their first Libertadores campaign to dream about.

It got under way on Thursday at home to Junior Barranquilla of Colombia. It was an afternoon kick-off - as all of Leon's home matches will be. Their little stadium does not have floodlights but it does have a hill behind it - and thousands of fans either too poor or too mean to buy a ticket gathered on it to cheer on their side.

Junior, though, won 2-1, the opening goal coming from a typical rifling shot from one-time Portsmouth and Southampton midfielder Jhon Viafara. As the home fans left the stadium, at least they had the memory of a superb goal from Carlos Elias to comfort them. And on Wednesday, they are at home again, this time to Oriente Petrolero of Bolivia - Leon's best chance of picking up three points.

Perhaps the stand out Libertadores debut last week came not from a club but from a player, Juan Manuel Iturbe. Aged just 17, he has already attracted considerable attention, being dubbed 'the Paraguayan Messi'. It is an impossible comparison, although Iturbe did his best to live up to it when he came on for Cerro Porteno of Paraguay at half-time in their match against Colo Colo of Chile.

This was perhaps the most entertaining game I have seen in some time. Quickly two goals down, Colo Colo found some form, reducing the deficit and threatening more. The Chileans continued to play some sparkling stuff after the break but to no avail. The introduction of Iturbe took the game away from them. 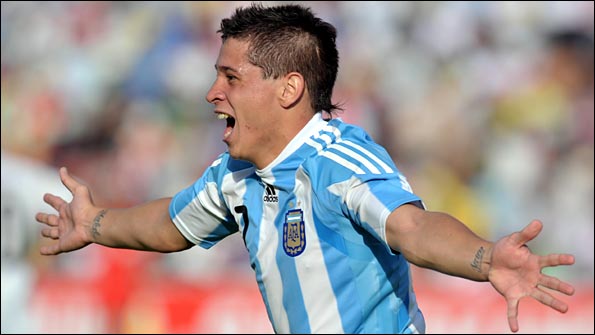 It took Iturbe less than a minute to get on the scoresheet with a goal out of the Messi handbook, cutting in on the diagonal, exchanging passes, making space with his acceleration and low centre of gravity and poking in a little left-footed shot at the near post. Towards the end of the game, he rounded off Cerro Porteno's 5-2 win with another special goal, turning his marker and guiding home a precise finish.

Iturbe, who celebrated his second goal with lots of badge kissing, came through the youth ranks with Cerro Porteno, Paraguay's most popular team. This match marked a sensational return to their colours for the talented teenager. He had been away for a year after falling out with the club.

It was a significant year. Iturbe's parents were among many Paraguayans who moved to Argentina in search of work. Though he grew up in Paraguay, Iturbe was born in Buenos Aires. And, 16 years later, when he fell out with Cerro Porteno, Argentina swooped.

Paraguay had awarded Iturbe a senior cap in November 2009, bringing him on as a substitute against Chile. But because it was a friendly, it is not binding. Seeing their opportunity, Argentina got him into their youth structure. He went to the World Cup as part of the sparring team for Diego Maradona's men. And this year he starred for them in the South American Under-20 Championships. The best thing about a disappointing Argentina side, he even scored the winner against Brazil.

Iturbe, then, is kissing the badge of Paraguay's most popular club but has thrown in his lot with Argentina at international level. And he will not be with Cerro for long. He turns 18 in June and is set to join Porto in Portugal.

Iturbe is a footballing citizen of the world. Perhaps before his time is out, he can join Penarol of Uruguay and re-educate them in what it takes to win the Copa Libertadores.

Q) I like Shakhtar Donesk and Willian is a fantastic player but he has never been called up to the Brazilian national team? Why is this? Do you think he has a chance? Also, what do you make of Giuliano going to Dnipro? He was fantastic in the Copa Libertadores but will he just be forgotten like some other big prospects? Douglas Costa was linked with Manchester United before but I've not heard much about him moving to any big teams.
Scott Cormack

A) These Ukraine-based Brazilians have put themselves in the spotlight like never before. Jadson was in the Brazil squad for the recent game against France - a deserved call-up for an excellent passer of the ball - and did well when he came on in the second half. Shakhtar's exploits in the Champions League also ensure that others at the club get noticed. Douglas Costa, for example, was called up by Brazil recently. As for Willian, he is paying the price for leaving Brazil so early. He was OK but nothing more when he played for Brazil at Under-20 level four years ago, making the move to Ukraine soon afterwards. In the case of Giuliano, I would hope that he is too good to be forgotten, even though he has gone to a club with less of a profile than Shakhtar. Next year's Olympics should be his big chance.

Q) What do you think of the Venezuelan clubs in the Copa Libertadores? I watched the Deportivo Tachira v Santos match and thought Tachira deserved to win. I am not saying they are going to win the tournament but it is nice to see a club from Venezuela making life difficult for such a big club as Santos. By the way, great attendance for that match.
Eduardo Torres

A) I would not go as far as to say that Tachira deserved to beat Santos but I thought they were fair value for their 0-0 draw, with Andres Rouga and Walter Moreno forming a classy centre-back partnership. It will be interesting to see how Iturbe gets on against them! The other Venezuelan side, Caracas, were clearly up against it after an early red card, perhaps harsh, to the talented Louis Angelo Pena. Even so, I thought they did well against Velez Sarsfield, maintaining a threat on the break. It needed two exceptional long-range shots to breach their defence. That 3-0 defeat is not the end and they can still get out of the group. The fact that both Tachira and Caracas have reached the quarter-finals in recent years shows the progress that Venezuelan football is making.