Last July, in his first press conference as Brazil coach, Mano Menezes said that he was aiming to include a sports psychologist in his back-up staff.

Brazil had just lost their heads as they bowed out to Holland in the World Cup quarter-finals and Menezes was aware that in 2014, on home soil, the pressure would be much greater.

The events of the last few days have shown just how important the mental aspect is likely to be for the next World Cup hosts.

In midweek, Brazil lost yet again to France, a well balanced game transformed into a comfortable victory for Les Bleus by the attempt of Hernanes to remove Karin Benzema's head. The referee had little option but to send Hernanes off after such an uncharacteristic lapse - which I can only presume was borne of frustration.

This was a big game for the Lazio midfielder but, unwisely selected wide on the left, he was struggling to get into the action and, perhaps as a result, lost self-control.

But the worrying signs for Mano Menezes were not so much in the red card - which we can put down to a one-off - but in the reaction of his team. They had nothing to complain about. And yet they kept on complaining, team captain Robinho even pulling the referee's shirt.

They were more focused on the referee - moaning, waving imaginary cards and trying to con him into giving free-kicks - than on playing their way back into the game.

Brazilian sports psychologist Regina Brandao, who worked with Luiz Felipe Scolari, has carried out psychological profiles of contemporary Brazilian players. She has outlined their tendency to have extreme reactions, to believe that everything is against them - especially the referee.

This goes beyond psychology, to the way the game has developed in Brazil. Leonardo Gaciba has recently retired after a career as one of Brazil's top referees. A few years ago he told me that the criteria he used in a domestic Brazilian match was different from that he employed in a Copa Libertadores fixture involving teams from other countries.

The referee, he said, has to be a chameleon, shifting his interpretation of the rules to suit the context. Elsewhere in South America, he continued, the players were more interested in the ball. In Brazil, they would always look for the foul. And so he would give more fouls. It was what everyone expected from him - players, spectators, media. 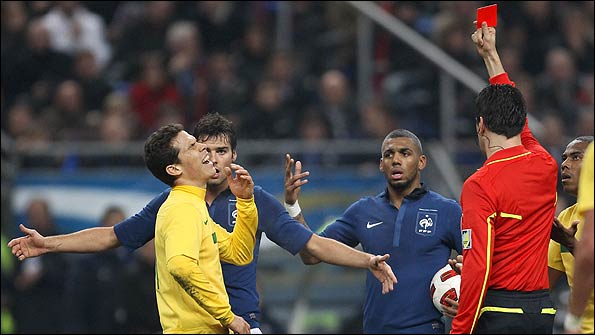 The referee had little option but to send Hernanes off after his foul on Benzema. Photo: Getty

TV coverage of football in Brazil is obsessed with the referee. High profile ex-officials are often in the commentary box, giving their verdict on decisions. If not, analysts are forever calling for more fouls to be awarded, more cards to be distributed. Players are diving all over the place.

It was not ever thus. The great Zizinho, idol of the young Pele and star of the 1950 World Cup, once told me something truly startling. He was highly proficient at breaking the leg of an opponent. And so were all the top players. That same sense of timing that made them so good also made them so dangerous.

Knowledge of this black art was so important because Zizinho and co served their apprenticeship in the greatest production line of footballing talent known to man - informal street, park and wasteland football.

It was an unruly world where self-defence skills were essential - and not just violent ones. Players were also learning vital lessons such as the safest moment to part with the ball, and move into position to get it back.

But urban expansion ate up many of those spaces, and urban violence turned some of the others into no-go zones. And so, instead of these informal games, futsal became the new breeding ground for Brazilian talent.

There is a lot to be said for small-sided games, with the opportunities they bring for prolonged contact with the ball. But in this case perhaps there has been a down side as well.

Before, as we have seen, players developed their own self-defence strategy. Now, in organised football, it is supplied by the referee.

Of course, we should celebrate the fact that today's young stars no longer need to learn to break legs. But in Brazil the pendulum has swung too far in the opposite direction. It has led to systematic diving - the player going to ground either because he has run himself into trouble, or to gain a free-kick in an advantageous position.

Current wonderkid Neymar is a truly remarkable talent. He glides past his marker on either side and finishes with gorgeous precision. But his diving is out of control. Like all skilful players, he takes punishment - though not nearly as much as stars of previous eras - but all too frequently there is either no contact or, before he plunges to the ground, it has been provoked by Neymar himself.

These antics have been tolerated in Brazilian football. But what happens when he steps outside the bubble, where referees employ different criteria?

Then there are two big risks, as the recently completed South American Under-20 Championships make clear.

First, Neymar will pick up cards for simulation. Secondly, there is the danger of he and his colleagues losing their heads, convinced that the referee is out to get them.
Brazil were head and shoulders above their Under-20 opponents, and were crowned continental champions.

But on the way they still managed to lose to a hugely disappointing Argentina side - and loss of emotional control was a key factor in the defeat.

Right at the start centre-back Juan was sent off and gave away a penalty for throwing an elbow. It was the only time that Brazil went behind in their nine games. Even with 10 men, they were better than their limited opponents. But they were more concerned with diving and protesting than with playing, and lost 2-1.

In the context of the Under-20 tournament, it hardly mattered. The championship is organised on a league basis. The World Cup is a different matter. No matter how good you are, one bad game (even one bad half) can bring the campaign to a traumatic early ending - as happened to Brazil in South Africa.

Mano Menezes must surely be worried at the prospect of something similar happening in 2014. Sports psychologists should be sending him their CVs.

Q) I would be interested to know your opinion about the Ronaldo experiment at Corinthians. With their quite spectacular exit from this years Copa Libertadores, their failure to land any silverware in their centenary year, and his, to put it politely, rather rotund physique, is it all considered a tragic misadventure? Or is he worth it purely for shirt sales and gate receipts?
Brendan Clark

A) Let's remember that when Corinthians signed Ronaldo, there was no guarantee that he'd actually be able to play - in that light, it's all been a bonus. He helped them win the Brazilian Cup, and qualify for two successive versions of the Libertadores.
Also, though latterly he's as stately as Queen Ann with gout, he's still been a useful player - but he needed others buzzing around him, as Elias did so well. Not replacing Elias was one of the key factors behind the team's Libertadores exit, which has (and I think rightly) forced his retirement. I certainly enjoyed watching him for Corinthians - he added a few more to the fabulous pile of memories he leaves behind him.

Q) Just wondering what you make of Dario Conca ever playing for Argentina? He was voted best player in Brazil last season, and is still yet to be called up by Argentina. Brazilians praise him, and some rival players from Botafogo said they inspire to play like him. Is it a personal issue between Sergio Batista and Dario Conca? Or has Conca just been unfortunate? He's such a talent and highly influential. Better than D'Alessandro in my opinion.
Luke Vooght

A) The case against him - he's never come off in Argentina. Also, Brazil has become a playmaker's paradise. There are few of them, but for those who can play there, pickings are rich - lots of space and protection from the referee, plenty of quick players (strikers and attacking full-backs) to bring into the game.

I don't believe there's any personal vendetta against him. David Ramirez was outstanding, perhaps even more than Conca, for Godoy Cruz last year and he wasn't called up. And there's no space in the Argentina starting line-up for a sensation in Europe such as Javier Pastore. Conca faces an uphill battle. His big - probably only - chance is to make a major impression in this year's Libertadores.