The champions of all the continents have congregated in Abu Dhabi for the annual World Club Cup - to the usual European indifference.

The great Brazilian left-back Roberto Carlos recently spoke of how, in 2000, he tried in vain to get his Real Madrid team-mates excited at the prospect of becoming world champions, but they treated it as a holiday. It did not endear him to fans of Corinthians, his current club, who won the title a decade ago.

Meanwhile, British football fans, it seems, can barely stifle a yawn about the competition, but I think this is unfortunate.

Everything started so positively. The roots of the current tournament lie in the annual battle between the champions of Europe and South America, started in 1960, which produced some epic matches in its early years.

Indeed, Pele believes his performance when Santos tore Benfica apart to win the title in Lisbon in 1962 as the finest of his career.

The British, though, only came to the party after Santos had given up on South America's Champions League. Instead, by the time Celtic and Manchester United won the European Cup, the Libertadores was in the grip of Argentine football at its most cynical.

There was little pleasure in facing Racing and Estudiantes, as Celtic and United did in 1967 and 68 respectively - just a long voyage to face stones thrown from the crowd and niggling opponents determined to remove all flow from the game.

Come the late 70s, when English teams took a stranglehold on the European Cup, they declined to take part in a two-legged tie against the South American champions.

They did turn up when the format changed in 1980, and the game was played as a one-off in Japan, but never took it seriously. It was a mid-season jaunt to play a glorified exhibition match, a gentle run to give the Japanese an idea of what football was all about.

Such ideas seem very dated now. With the global expansion of football there is nothing remotely funny about a football tournament taking place in Japan, where the first four World Club Cups were staged after Fifa introduced the current format in 2005.

The same applies to Abu Dhabi, which is staging the competition for the second time.

Even so, the tournament has still not caught the European imagination - the British especially. Two things are missing.

The first is quality. Some of the teams are weak. Then again, without exposure to a better level of competition, how are teams expected to improve?

African champions TP Mazembe are taking part for the second consecutive year. Last Friday's win over Pachuca of Mexico indicated that they have profited from last year's experience and have developed over the last 12 months. 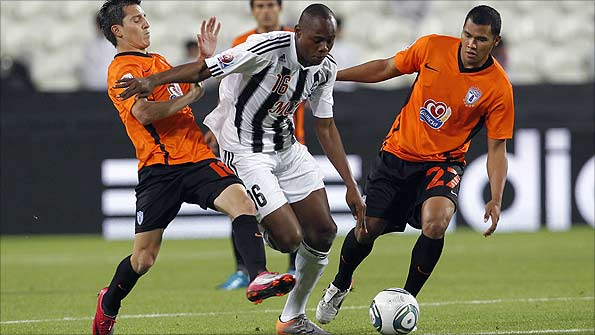 The other missing factor has been a truly thrilling final, the cut and thrust of two evenly-matched teams producing an excellent spectacle.

This has not happened because of the imbalance of forces. So far the final has always been contested by the representatives of Europe and South America. There have been two triumphs for Brazil - Sao Paulo beating Liverpool in 2005 and Internacional overcoming Barcelona a year later. But the victorious pair, like the other South American finalists, took the field acknowledging their inferiority. They fought from a trench, hanging on for grim life and hoping to get lucky with a counter-attack.

The exception was Boca Juniors of Argentina in 2007, who went toe to toe with Milan and were beaten far easier than the 4-2 scoreline would suggest. Their defeat was hardly surprising as the best South American, Kaka, was playing not for them but against them.

European club football had managed to transform the rest of the planet into its feeder. The South American teams, made up of workmanlike players plus the odd promising youngster, were up against the best that the whole world had to offer. It is little wonder that there has been an imbalance of forces.

Perhaps the playing field is levelling up a little bit. The crisis in Europe's economy, along with the boom in Brazil's, might in time produce a different scenario - which could be tested out this year.

Assuming that the final is once again between Europe and South America - and there will surely come a time when it won't be - then Saturday's match-up might prove the most fascinating since the current format was adopted.

Inter Milan are not the most dominant European champions of recent times, while Internacional of Brazil have a more expansive, talented side than the one which frustrated Barcelona four years ago.

Having said that, Internacional are still a selling club, who look to finance their squad by producing and selling potential stars to Europe. They anticipate that the terms of trade are working in their favour, and that soon they will be able to hang on to their best players until the age of 23 or 24, rather than the current optimum selling age of 20/1.

Their latest two products left as soon as the club had won the Libertadores title in August. Midfielder Sandro joined Tottenham, but more problematic has been replacing support striker Taison, who joined Ukraine club Metalist. His flying pace was vital to coach Celso Roth's 4-2-3-1 system.

Once of Portsmouth, Argentine Andres D'Alessandro is an impish playmaker, and young Brazil international Giuliano is a player of exceptional promise. But without Taison the team have found it harder to lengthen the game. With everyone wanting the ball to feet they have at times had possession without penetration.

To my mind, then, Inter Milan are still favourites to win the title. But there is the chance of a better game. Rather than a prolonged attack against defence, we might see a match where both sides are seeking to impose themselves. The World Club Cup needs to come up with such a spectacle if it is going to rouse the English from their indifference.

Comments on the piece in the space provided. Questions on South American football tovickerycolumn@hotmail.com, and I'll pick out a couple for next week.

From last week's postbag:
Q) I understand that Brazil always takes the Olympics seriously. Would they take the Confederations Cup in 2013 and the next Copa America seriously considering the lack of competitive matches between now and 2014 when they host the World Cup?
Edmund Allen

A) No doubt about it, the lack of competitive matches is not ideal. They will try to compensate by facing teams with different styles in friendlies but there is no substitute for competitive action.

The Copa America will shed light on the success of the generational and philosophical changes they have made since the World Cup, and the Confederations Cup will et them used to the challenge of playing competitive matches in front of their own crowd.

Q) While the much-maligned Lucas Leiva, who at 19 became the youngest player ever to win the Bola de Ouro, struggles to impress for Liverpool in the Premier League (although he has improved since the departure of Rafa Benitez), he continues to be called up by Brazil and especially now under Mano Menezes and has even managed to win some plaudits for his performances in a Brazil shirt.

What in your opinion is stopping him from repeating his form that he had in the Brazilian league for Liverpool? Do you think he could turn his fortune around if he leaves for say, the Serie A or La Liga?
Darien Loh

A) I'd love to know what Liverpool fans make of his recent form for the club. It's been hard going for him establishing himself - compared with Brazil, there is so much less time in English midfields, which inevitably creates problems of adaptation.

The 2007-model Lucas was a player seen at his best making forward bursts and getting into the box - precisely the thing that Steve Gerrard does so well. So I think that was a problem for him. But credit to him - he hasn't stood still as a player. He's a much better defensive midfielder than he was when he joined Liverpool, which Mano Menezes has spotted and is making use of.

With Gremio, Menezes used Lucas as the second man in midfield i.e. with more freedom to get forward. Now with Brazil he's been playing him as the holder, marking and distributing from deep.