Ronaldinho has been recalled to the Brazil squad for the forthcoming friendly against Argentina and there are some who might think the call has come six months too late.

When it all went wrong in the second half of that World Cup semi-final against the Netherlands, and coach Dunga looked along his substitutes bench in search of a saviour, was he really more pleased to see the likes of Julio Baptista than Ronaldinho?

With hindsight, the answer appears obvious. Going into the World Cup, though, Dunga was entitled to think differently.

He had been unable to find a way to get Kaka, Robinho and Ronaldinho to function together. Ronaldinho had been given chance after chance and had thrown them away, performing like a pitiful apology for his former self. Once he was jettisoned, results improved and the team seemed to take shape.

There is no doubt about it - the main person responsible for the absence of Ronaldinho from the World Cup was Ronaldinho himself. It was a sporting tragedy.

At the age of 30, the tournament in South Africa could - perhaps should - have been Ronaldinho's definitive statement as an international footballer, and one of the most talented players the game has ever seen.

He is clearly a much more complex character than his happy, smiling image suggests.

For all his natural talent, it is not possible to become so outstanding in a competitive activity like football without a true love for the game. By the same token, such a waste of his peak years can only point to a strong disillusionment.

He went through a mini-slump following Brazil's failure at the 2000 Olympics, a precursor for the massive depression that set in after the 2006 World Cup. Did the responsibility prove too great in Germany? 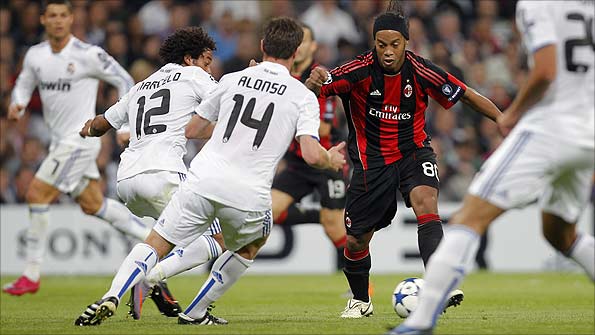 In his pomp, Ronaldinho had no problems being the leader of the pack at Barcelona. Was it so different when he was representing his country? Was too much of his self-worth bound up with results? Did he really derive so little pleasure from his own breathtaking ability, the source over the years of so much pleasure for so many? Was partying really more important? How could he not see that he had his whole life to party, whereas his one great talent has a ruthlessly unforgiving shelf life?

Barcelona gave up on him after failing to get a reaction with either the carrot or the stick and Milan had similar problems, at least until Leonardo took charge last season. A mixture of coach, psychologist and older brother, Leonardo managed to coax something of a revival from Ronaldinho - though it proved too little and too late to win him a place on the plane to South Africa.

Earlier this year, when Milan were bundled out of the Champions League by Manchester United, I felt a pang of worry for him. Those two matches effectively ended his campaign to go to the World Cup.

I feared that he might be caught in a downward spiral, instead of which, here he is back in the Brazil squad, with the chance to play his way in for a last hurrah on home soil in 2014.

Two things have changed. Firstly, he is no longer restricting himself to that small strip of the pitch down the left flank. In some games, he has taken on a more central role.
This is important because at the highest level it is very hard for a wide player to make an impression without searing pace.

Once, lightning acceleration was Ronaldinho's trademark. He has lost it, and even it he works hard to get it back, time is against him. Playing in the middle gives him more options for his passing ability.

This is where the second change comes into play. Under new coach Mano Menezes Brazil have changed their approach. No longer restricted to the counter-attack, now they are looking to play a more possession-based game - which needs players capable of putting it into practice.

In August, Menezes' Brazil made an excellent start with a win over the United States. Last month they were not quite so impressive beating Iran and Ukraine.

Against the US, promising playmaker Paulo Henrique Ganso made a sound debut, operating centre-field in a 4-2-3-1 formation but he picked up a serious injury soon afterwards and his absence - or, more accurately, the absence of a player of his type - was strongly felt.

Against Iran, for example, Robinho, Carlos Eduardo and Philippe Coutinho - three players who like to run with the ball - played behind lone striker Alexandre Pato, but however quickly they run, someone with a good range of passing will always move the ball quicker.

This, then, could be Ronaldinho's role against Argentina. He could be the senior statesman, surrounded by speed merchants to do the running, using his experience to pick the passes and direct the attack - a role similar to the one the veteran Zidane carried out for France in the 2006 World Cup, where, of course, it all went wrong for Ronaldinho.

Is he up to the task? The answer probably lies as much in his mind as in his body. Those of us who love watching him at his exuberant best will hope that the chance of making history in 2014 works as a powerful motivating force.

Q) I am Colombian, and Atletico Nacional supporter. I have a question about the former Nacional player, currently with Racing Club in Argentina, Giovanni Moreno. Can he make it in the Premier League? What do you think about him?
Esteban Jaramillo

A) A very interesting player, who's made an excellent start to his spell in Argentina. He's a lanky figure who plays either as a conventional number 10 or a little higher as a support striker. He has a terrific left foot, combines well and seems to have a strong personality, and would seem to have a brilliant future.

I'm not sure about England, though. His favoured position is not easy - space is squeezed, there's little time to decide what to do. Here his build works against him - with those telescopic legs he perhaps lacks speed off the mark. England might not be his ideal destination, but I think he can succeed in Europe and he has a big part to play for the Colombian national team.

Q) Who do you think Brazil's best right back is at the moment? With Maicon slipping lately (at least in relation to his lofty standards), I see Alves taking the spot. Alves is also a bit younger, and Maicon's legs may be beginning to go. Do you see Alves finally upstaging Maicon? Menezes has a decision on his hands, albeit admittedly a good problem to have.
Eric Lurz

A) Maicon hasn't had a look-in since the World Cup, as Menezes has gone with Daniel Alves. In fact, very few of the Dunga gang have been called up, though the new man is keen to stress that the door is not closed. But at the next World Cup Maicon will be pushing 33, while Daniel Alves will just have turned 30, and that surely tips the battle in his favour. The other right back in the squad is Man United's Rafael.