Buenos Aires is calling to the faraway towns this week. In Argentina and all over South America, plenty of attention will be given to the modestly entitled 'superclassico' - the Buenos Aires derby between River Plate and Boca Juniors.

Both clubs grew up in the working class docklands area of the Argentine capital. River have long since fulfilled the immigrant dream and moved out to the leafy suburbs. Boca have defiantly stayed put. The strength of the rival identities helps give the game its flavour. Over the years, the game has acquired a weight of tradition that makes it important even when it isn't - like this Tuesday.

After a run of disappointing results, River have just sacked coach Angel Cappa, looking for a quick pick-me-up before the game. Boca could well part company with Claudio Borghi if they are beaten. But there is very little at stake.

The clubs are 11th and 13 respectively in the table. They are not going to win the title or qualify for the Copa Libertadores, the continent's Champions League. River are flirting with relegation (worked out on an average of points over three years) but they still have well more than 20 games to save themselves, including another 'superclassico.'

It doesn't receive anything like the same amount of interest but something more important for the future of Argentine football could be happening hundreds of miles from Buenos Aires, over to the west near the border with Chile in the city of Mendoza.

A club from that region called Godoy Cruz lost on Sunday to a last-minute goal. Even so, a strong finish to the season should ensure they qualify for next year's Libertadores - an achievement which could have great significance. 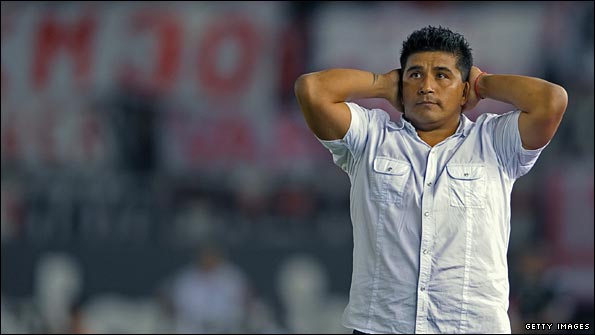 Argentina is a huge country but, like many of its neighbours, is highly centralised. A giant port dominates a feeble hinterland. Football shows the trend with great clarity. Of the 20 clubs in the first division, 14 are from greater Buenos Aires, with another two from nearby La Plata. The rest of the country hardly gets a look in. Rosario is the only other city with a major national and international footballing tradition.

The only times the title has eluded the clubs from Buenos Aires or La Plata, it has gone to either Rosario Central or Newell's Old Boys. If this was England, it would be like restricting the title to the London clubs and a couple from Birmingham, only Argentina is a much bigger place.

Colon of Santa Fe are a provincial club now established as mid-table regulars. Otherwise, the representatives of cities such as Cordoba, Tres Arroyos, Jujuy, Tucaman, Bahia Blanca and San Juan share the same experience. They are promoted, only at best to hang on for two or three years before suffering relegation. Often they go straight back down.

Unable to consolidate themselves, these clubs cannot build a following or invest in a structure that generates major players. And while Argentine football is so restricted to Buenos Aires, it is clearly operating short of potential.

That is what makes the Godoy Cruz story so interesting. They went through this yo-yo experience, making their first division debut in 2006/7, only to go straight back down. But after a year out, they were back and have been doing surprisingly well.

In the current campaign, they are top scorers. The leading light is 29-year-old playmaker David Ramirez, a player of such talent that it seems amazing he was not discovered earlier, while veteran Colombian striker Jairo Castillo seems to have shrugged off his wild child behaviour to play the most consistent football of his wayward career.

Central midfielder Nicolas Olmedo, given a brief Argentina appearance by Diego Maradona, is a local lad but the vast majority of the squad are not home grown. That might change. Producing their own players will become much easier if Godoy Cruz can keep their momentum going - and that makes a Libertadores campaign all the more important.

In the 51 years of South America's premier club competition, participation from Argentine clubs has been almost entirely restricted to Buenos Aires/La Plata and Rosario. Colon had a run to the quarter-finals in 1998 and lost in this year's qualifying round. Talleres of Cordoba fell in the group stage in 2002. And that is it.

Godoy Cruz, then, are within reach of making history for their region. Of course, qualification for the Libertadores brings its own pitfalls. Competing on both the domestic and international fronts would be a huge strain. Talleres were unable to handle it in 2002, a factor in their relegation two years later.

But for Godoy Cruz, the timing might be more fortunate. Last week, the draw was held for the Copa America, the tournament for the continent's international teams that Argentina is hosting next July. For most countries, the most interesting aspect of the tournament is that it offers a chance to warm up for the 2014 World Cup qualifiers, which get under way soon afterwards.

Possibly the most important thing about the Copa is the need to invest in stadiums. Eight venues are being used, with Argentina making a concerted attempt to decentralise its football. Only the final is in Buenos Aires, while Rosario does not feature. Instead, the action goes to Santa Fe and Cordoba, to Salta and Jujuy, to San Juan and Mendoza.

Godoy Cruz are in the right place to take advantage of this moment, to ride the wave of decentralisation and establish themselves as a national force. Their match against, say, Colon of Santa Fe will never have all the hype and the tradition of the Buenos Aires 'superclassico'. But maybe one day it is where the Argentine title will be decided.

Q) As a half-Colombian living in Europe, I have been well aware of the striking talents of both Hugo Rodallega and Radamel Falcao Garcia. Yet every time I check the Colombian line-up they are never partnered together in attack, particularly in in the case of Rodallega, who, a lot of the time, is not selected at all. Has he fallen out with the coach or is it tactical? And if one of these is true, how can Colombia become a real force when they are overlooking such a versatile striker?
Stephen Tew

A) One or the other has often been unavailable of late. They played together in September in the 2-0 win over Venezuela, while Rodallega came on for Falcao Garcia a few days later in the 1-0 defeat to Mexico. Scoring goals remains a huge problem for Colombia - just one in the last three games.

Coach Hernan Dario Gomez has gone with a 4-2-3-1 formation, with Giovanni Moreno operating behind the lone striker and Rodallega often featuring on the left. It hasn't quite worked for me. In this system, the lone striker has to be good with his back to goal and Falcao Garcia, a fine player, has struggled here. Neither of your men are in this week's more experimental squad to face Peru, so Jackson Martinez may well get a chance up front.