Bielsa's early exit such a waste for Chile

A successful and promising relationship has come to a premature end with the news that Marcelo Bielsa will not continue as coach of Chile.

There is little point in appointing a foreign coach unless he brings something fresh - which the eccentric, but highly respected Argentine certainly has in the course of his three years in charge.

He took Chile to their first World Cup since 1998, winning more away games than anyone else in the qualification campaign. In South Africa in 2010, Chile quickly became the neutral's favourite. In a tournament dominated by caution, Chile's carefree attacking approach was a joy to behold.

The performances of the team said more about Marcelo Bielsa than they did about Chilean football.

He coaxed from his players a faithful representation of the approach that has made him one of the most interesting coaches around over the last 20 years.

His idea is always to attack, no matter where the game is played and who the opponents might be. He wants the play to take place in the opponent's half of the field. Whatever the shape of the side - 3-3-1-3 is his favoured formation - there are a number of constants; his team will always seek to play at a high tempo, with a central striker and two wingers and the aim of creating two-against-one situations down the flanks. 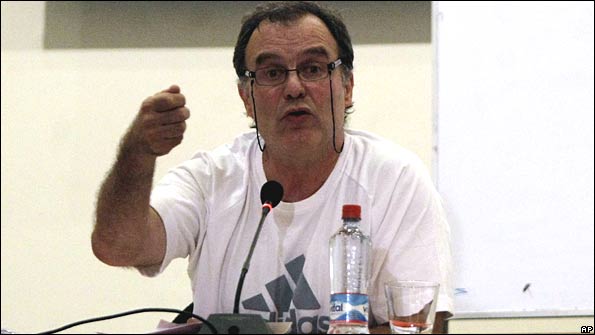 Before working with Chile, Bielsa was in charge of his native Argentina from 1998 to 2004. In a very significant way, Chile was easier for him.

Argentina has a highly developed sense of its own footballing identity, to which the number 10 is crucial. Juan Roman Riquelme, with his elegant, foot-on-the-ball playmaking, is the guardian of the flame. Bielsa, though, had no place for him. Rather than the changes in rhythm that Riquelme inspires, the coach was looking for all out dynamism - which left him open to criticisms that he was trying to Europeanise the national team.

During his reign it was common for club coaches in Argentina to differentiate themselves from Bielsa by stressing their commitment to 'the pause' - the moment when the old-style number 10 slows the game down in order to rethink the attack. In Argentina, then, Bielsa often found himself swimming against a powerful current.

Late 2007 was also a good time to take over. Humiliated on the field in that year's Copa America and with disciplinary problems off it, Chile appeared to have hit rock bottom. The only way was up - and giving momentum to the rise was the fact that an excellent generation of youngsters had just reached the semi-finals of the World Youth Cup.

They were to prove Bielsa's raw material. His bold gameplan requires a high level of fitness. He inherited an exciting group of players with young legs and open minds, and made a team of them. Versatile defenders or midfielders Arturo Vidal, Gary Medel and Mauricio Isla, central midfielder Carlos Carmona and, above all, wonderful little right winger Alexis Sanchez were all graduates from the World Youth Cup campaign who became stalwarts of the senior side.

Bielsa's option to stand down is frustrating for two reasons. Firstly, because he and his young side could have gone on to achieve much more. And secondly, because their time together could have been even better.

Three goals in four World Cup games was a disappointing return for a side of such attacking ambition. They would surely have scored more had centre forward Humberto Suazo been fully fit. Top scorer in the South American World Cup qualifiers, he was recovering from an injury when he was unwisely risked in a warm-up match. Injured once more, he was nowhere near 100% in South Africa.

In retrospect, Mauricio Pinilla should have been in the squad. Once briefly in Scotland with Hearts, Pinilla has been once briefly with a lot of clubs in a number of different countries. The striker came close to throwing away his own career with his wild-child antics. But he has always been a highly gifted player, potentially of genuine world class - as he has hinted in Italian football over the last 18 months. Especially in the absence of a fit Suazo, Pinilla would have been a useful option in South Africa.

He has been recalled for next week's game at home to Uruguay, seemingly Bielsa's swansong in charge of Chile. The idea of Alexis Sanchez and Pinilla operating together is an appealing one for Chile fans - but after next week it will not be Bielsa's job to get their talents to combine. He is leaving because Harold Mayne-Nicholls was not re-elected last week as president of Chile's FA. Before the election Bielsa made it very clear that he would not work with the opposition candidate Jorge Segovia.

Mayne-Nicholls, though, only carried the votes of six of Chile's First Division clubs. Segovia won the other 12, including the Santiago big three of Colo Colo, Universidad de Chile and Universidad Catolica. The election was, and continues to be controversial, with conspiracy theories flying around and claims that Segovia might be prevented from taking office on complicated legal grounds.

Mayne-Nicholls, though, has made it clear that he will not be coming back. One of the major complaints about him was the grumble that he prioritised the national team and his Fifa work over the domestic championship. He recently served as the chairman of the Fifa inspection committee which visited the countries bidding to stage the World Cups of 2018 and 2022.
Polished and articulate, he cut an impressive figure. But he has been cast out by an internal revolt at the very moment when his international prestige was at its highest. As a result, the national team is parting company with one of the world's most respected and interesting coaches. Chile's new regime will have to come up with something special to make up for the loss of Marcelo Bielsa.

Comments on the piece in the space below. Questions on South American football to vickerycolumn@hotmail.com, and I'll pick out a couple for next week.

Q) I really enjoyed watching Alexis Sanchez playing at the World Cup, and as a Manchester United supporter would love for Sir Alex Ferguson to sign him... Do you think he could make it in the Premier League?
Natalie Cass

A) I'm half surprised they haven't taken him already. He's not yet 22, but it's been obvious for four years that he is a top talent, who would fit in with United's tradition of wing play. His coach at Udinese says that he still has some maturing to do, so perhaps he would have to toughen up a bit to do well in England - and he would also need to stay on his feet more. But for what it's worth, my opinion is that he's something special and could adapt to the Premier League.

Q) Where do you think the best atmosphere is found in South America?
Jaime Begbie

A) It has to be Argentina. Some similarities with pre-Taylor Report, but some differences, too. Much more pure passion than irony, and also the importance of the drum in the songs. It sometimes seems that the game is peripheral - they've gathered for the pleasure of being together and signing those songs - which when you come away from the stadium you can't shake out of your head.