Brazil will expect another commanding performance from Thiago Silva when they take on Ukraine at Derby's Pride Park in an international friendly on Monday.

The 26-year-old Milan defender was in fine form in last Thursday's 3-0 win over Iran - especially important as his centre-back partner David Luiz had a poor game, obliging Thiago Silva to show off his excellent sense of cover.

In the World Cup, Thiago Silva was a reserve to the old firm of Juan and Lucio. Just three months later, he is the rock on which Brazil's defence is based, highlighting the speed of the generational change taking place under new coach Mano Menezes.

And offering a clear contrast with Argentina. 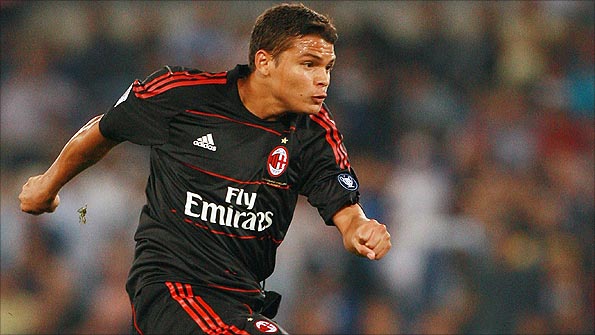 For Friday's 1-0 defeat to Japan, and last month's 4-1 win over Spain, Martin DeMichelis and Gabriel Milito were in the heart of the Argentine defence. Both players have their virtues, though neither has always looked comfortable at international level. And, at about the 30 mark, it is unlikely that they will feature in the next World Cup.

The centre-back situation shows how Brazil are already building for 2014, while Argentina are stuck in limbo.

Who will lead them forward? And with what philosophy of play? At the moment, in the figure of 1986 World Cup-winning midfielder Sergio Batista, they have a caretaker coach.

This might provide an opportunity for experimentation but Batista wants the job on a permanent basis and is being forced to fight every inch of the way.

His principal adversary is his predecessor and former team-mate Diego Maradona. This column has always tried to be fair to one of the all-time greats.

There were positive aspects of Maradona's reign. He took over at a difficult moment and his record in charge was not as bad as many tried to make out - until he was carried away by euphoria and sent out an unbalanced side to be thrashed by Germany.

In 2006, Jose Pekerman's side lost on penalties to the Germans after dominating the game against that year's World Cup hosts.

When they came home to a heroes' welcome, Maradona said that there was nothing to celebrate, that Argentina should aspire to something more.

By the same criteria, then, there are no grounds for Maradona to continue in the job after his team were taken apart by the same opposition on neutral territory.

But on the campaign trail for a re-instatement, Maradona has tried to pull rank, mentioning his friendship with Argentina's first family, the president and her husband and predecessor.

He has sought to undermine Batista, saying that no one knows who he is, even in neighbouring Uruguay. Batista has other candidates to worry about, - Estudiantes coach Alejandro Sabella especially.

Brazil coach Menezes has been told that early results are not so important, that he has time to build a side and will be supported in good times and bad.

In contrast, Sergio Batista is working on the opposite basis - that his fate will be determined by results.

There is, then, no incentive at all for him to blood some younger centre-backs and run the risk of paying for their inexperience.

Does any of this matter? There are mitigating circumstances.

Brazil and Argentina are not in the same boat. As the next World Cup, hosts Brazil will not have the benefit of a qualification campaign to whip their side into shape. It is no surprise, then, that their preparation has begun earlier.

And whoever takes over Argentina, the focus is likely to be on the short term. Next year, Argentina host the Copa America.

Without a senior title since 1993, the pressure will be on them to win, thus extending the shelf life of the likes of DeMichelis and Gaby Milito.

A younger team for 2014 can be forged during the course of South America's ultra-competitive World Cup qualifiers.

And anyway, in the four-year cycle, this is the season when South American national sides are most concerned with making money.

For three years of that cycle, their time is taken up with the marathon qualifying format. This is the moment now for them to cash in on the prestige earned earlier this year in South Africa - hence the fact that at the moment many of the South American sides are clocking up the air miles on the way to the Middle and the Far East.

Even so, I would argue the fact Argentina are in a footballing limbo does matter - it has the potential to make a mockery of the extraordinary passion of the players for pulling on their national team shirt.

Many of the South Americans make sacrifices to play for their national team that would be beyond lots of European players - especially in terms of travelling.

When they make the long trip to play a friendly in Japan, Argentina's players want to feel that they are representing their country and also that the match forms part of a process in which a team is being prepared for the battles ahead.

They do not want to be mere cash cows for their football association, or gambling chips in a game of poker where the prize is a contract to become national team coach.

It does not make sense to force Lionel Messi to the other side of the world and make him play a full 90 minutes when common sense would be better served by him putting his feet up and ensuring there is gas in the tank at the serious end of the season.

Comments on the piece in the space provided. Questions on South American football to vickerycolumn@hotmail.com, and I'll pick a couple out for next week.

Q) I was just wondering what ever happened to Renato Augusto? A player you referred to as the 'right-footed Rivaldo' Just seeing clips of him online he looks a very exciting player; great dribbling skills and an eye for a pass.

I know he's at Leverkusen but has not featured in the Brazil senior squad as of yet. It seems as though he has dropped off the radar a little do you think he can still be a star for Brazil with the likes of Coutinho, Paulo Henrique Ganso, and Anderson who play in the same position as him?
Monty Hallaq

I might have laid it on a bit thick with the 'right-footed Rivaldo' thing but no doubt that he's a very interesting player. One of his characteristics - passing - was missing for Brazil against Iran. Robinho, Carlos Eduardo and Philippe Coutinho were too similar to operate together - they all want to run with the ball and there was not enough passing.

A pity, perhaps, that Renato Augusto is not in the Champions League to push his claims, but he's a player entitled to feel that he could figure in the rebuilt Brazil squad.