In 1922, when English politician Stanley Baldwin wanted to launch a revolt against Prime Minister David Lloyd George, he described his adversary as "a dynamic force".

And, he added, "a dynamic force is a very terrible thing".

Those of us who love football will know what he means.

The game runs on passion, from fans, players and coaches. Take the passion away and the game is nothing but too much is deadly.

Football has brought countless benefits, but there is also plenty to lament from stadium disasters to lives lost in pointless conflicts. Uncontrolled human emotion can be a very terrible thing.

I was dwelling on this after watching the quarter-final places filled in South America's Europa League equivalent - known as the Copa Sul-Americana in Brazil, and the Sudamericana elsewhere - or simply the South American Cup.

Home advantage is part of football, and it is especially strong in South America for legitimate reasons, one of those being the distances involved. 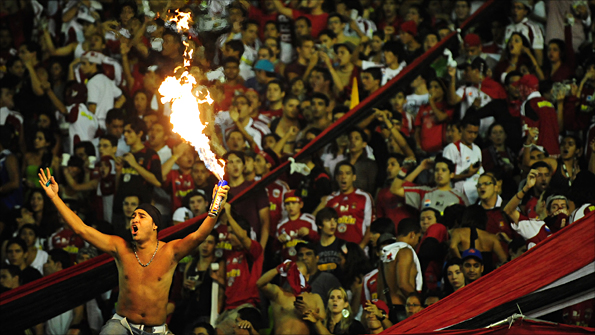 The continent is vast. From Banfield, Buenos Aires to Ibague in Colombia, home of Tolima, is a marathon trek, and helps explain why the home side came out on top in both legs.

Then there are differences in climate and conditions - especially altitude.

Some will argue that this is an unfair advantage. For the moment, though, it is legal - and it always seems to me that any medical evidence would have to be very convincing in order to ban clubs based at altitude from international competition.

There is no doubt, though, that against unacclimatised opposition, altitude is an advantage for the home side.

It is a factor that helps explain LDU of Ecuador beating Chile's San Felipe 6-1, or the 2-0 victory of Bolivia's San Jose over Newell's Old Boys of Argentina (though Newell's had won the first leg 6-0).

But if unfamiliar conditions and hostile environments are part of the game, it is clear that this can be taken too far.

In their newly rebuilt stadium, Independiente, of Argentina, took on Defensor, of Uruguay, in a hard fought, entertaining tie.

Before the second half, visiting keeper Martin Silva, Uruguay's third choice in the World Cup, was struck by a large stone thrown from the crowd. There was blood all over the place, and a hold up while he recovered.

Silva would have been within his rights to refuse to carry on - I have seen games abandoned when players of officials have been hit. Sportingly, he shrugged it off and the game proceeded - an excellent game, in which Defensor deserved better fortune than to lose 4-2 and go out 4-3 on aggregate.

This type of incident must have consequences. Independiente are next at home in the competition against Tolima on 11 November - a match which must surely take place behind closed doors or at an alternative location.

It is unfortunate for Independiente, who have sunk time and money into their ground but there must be punishment.

This type of thing happens far too much in South American stadiums. In some parts of the continent, especially Colombia, visiting players can only take corners with the aid of police holding up riot shields to protect them from objects raining down from the stands.

Less dramatic, less dangerous but equally undesirable were some of the practices on show in the tie between Brazil's Avai and Emelec, of Ecuador.

To be fair to the Brazilians, they were very unhappy with the treatment they received in the away leg, and as someone who was once on a pitch in Ecuador with bottles being hurled from the crowd I can sympathise.

But Avai did not cover themselves in glory by resorting to a ruse which is depressingly common in South American football. In the second half, when the home side are ahead, the ball boys disappear, and the rhythm of the game is slowed right down.

Another trick, often employed in Brazil, is designed to make a substitution take as long as possible. The player about to be taken off looks across, sees his number on the board and goes down to the ground. The little cart has to come on and take him away and a change that should take 10 seconds ends up eating into a minute or more.

To my mind this is a blatant abuse of a facility that has been provided to help players who have suffered an injury.

These are all instances where the passion for a club and the desire for victory lead people to trample all over ethical considerations. Unlimited passion is indeed a terrible thing, so terrible that it destroys the purity of the victory it craves.

If football was just numbers it would be bingo. What has always mattered in the game is not just what you do, but how you do it.

Some like to say that only the winners are remembered. They can say it all they like, but it doesn't make it true. Hungary in '54, Holland in '74, Brazil in '82 - none of them went home with the World Cup, but all are recalled fondly and passionately by people who loved their style.

From last week's postbag;
Do you think that some European clubs will want to take a risk on Gremio's Jonas? He is the top scorer in Brazil with 20 goals, but at 26 is he too old for clubs to take a look at?
Elliott Sweeney

I don't see his age as a problem - he's only a year older than Hernanes, who's made such a good start with Lazio. But what's not really clear is whether this is just a flash in the pan. He's something of a late developer - he was training to be a pharmacist and needed persuasion to take up the game. He's in a run of form where everything he's striking is going in. He's never been this prolific before, though he has always been talented. So that's the big question for anyone wanting to invest in him - can he produce this form on a long term basis?

Pele or Maradona, who is the better player?
Chris Bender

Horrible question! It's not a debate I really like. I've seen how much in South America this can provoke idiot, infantile nationalism. It's so hard to compare across eras, especially in a team sport, and I hate the fact that the argument usually becomes adversarial, when the point of players of this calibre (and Alfredo Di Stefano has a strong case as well) is to enjoy them.

You can make cases for both of them (and Di Stefano!). Pele is more complete in the sense of being more two footed and better with his head than Maradona, but I'm also fascinated by the observation from Alf Ramsey that he thought Pele had nearly everything, while Maradona has the lot.

You would expect Ramsey to go with Pele - people usually choose contemporaries, and Pele played against Ramsey's sides. I've always thought Ramsey was a very shrewd judge, and I think he was saying that he thought Maradona was better in a collective sense, more integrated into the team.

Maradona's case - triumphing with Napoli whereas Pele played a lot of friendlies with Santos. And 1986, of course, which Pele can't quite match. Both the exuberant youngster of 1958 and the wily veteran of 1970 were great, but a bit short of what Maradona achieved in Mexico.

Perhaps this argument would be easier if Pele hadn't been injured in his second game of the 1962 World Cup. I think that around then he was at his absolute peak - the goal he scored against Mexico in the opening match is simply breathtaking. Chile '62 could have been what '86 was to Maradona, and might have clinched the argument in Pele's favour.