Why the Argentine rollercoaster fails to thrill

Chelsea's start to the season shows it is not easy for a competition to retain both quality and competitive balance.

The Premier League has a collective TV deal, with a more equitable distribution of television money than some other major leagues. Even so, those clubs with a wealthy benefactor or a huge fan base can put themselves streets ahead of weaker rivals, while only a handful of clubs go into the season with any realistic chance of winning. A dose of predictability is the price paid for the quality on show.

It is the opposite of domestic football in Argentina, where the first division has become wildly unpredictable. However, the price paid for this excitement is a lack of quality.

The last eight championships have been won by eight different clubs, including first-time champions Banfield and Lanus. Argentinos Juniors won the last title, only the third in their history, but are down at the bottom of the table after seven games of the new campaign. 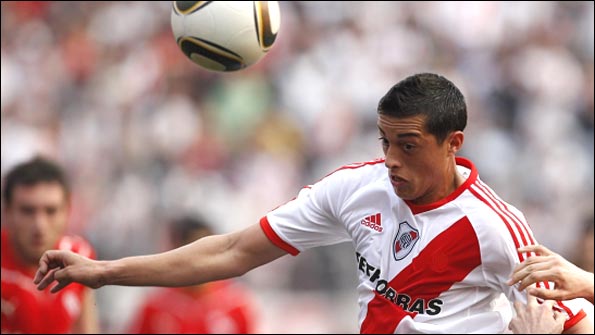 Funes Mori was scouted by River while training with Chelsea. Photo: AP

It is a typical story. A relatively small club clicks for one campaign but then drops back down again after losing their coach and their best players. And the space for these small clubs to break through comes from the fact that the big clubs are continually parting company with their best players.

A survey published last week found that Argentina has now overtaken Brazil as the leading exporter of footballers - a remarkable statistic given that Brazil's population is nearly five times bigger. And when everyone is selling, all the teams are in a permanent state of flux and the playing field is levelled - downwards, because the standard of play inevitably suffers from the loss of both players and continuity.

The level of unpredictability is increased by the fact that Argentina stages two separate championships a year, in which the 20 teams play each other once. The shorter the season, the greater the chance of a surprise.

Largely to protect the big clubs from a bad campaign, relegation is worked out on an average of points accumulated over three years, or six championships.

This helps explain the bizarre position in which River Plate find themselves.

The Buenos Aires giants have more domestic titles than anyone else and are in contention this time. On Sunday, they lost 1-0 away to Newells Old Boys. A win would have left them on top of the table. As it is, they lie sixth, only two points behind the leaders.

Yet River Plate are also in danger of relegation. Bad results for two years mean they entered this campaign with a noose around their neck. Next May, two clubs will go down automatically and two more will go into the play-offs. Using this average of points picked up since the 2008/09 season, River are in 18th position, third from bottom.

They still have plenty of time to pull clear - another 12 games of this campaign and all 19 of the next - but the players are currently feeling twin forces of pressure: both of winning the title and of fighting the drop.

It is a situation that cries out for experience. River have it in the form of two former internationals, both now 36. There is captain Matias Almeyda, who played some of his best football in the holding role for Lazio and who has made an unexpected comeback after retiring from the game. Then there is playmaker Ariel Ortega, a victim of his own demons but still capable of flashes of extraordinary talent. 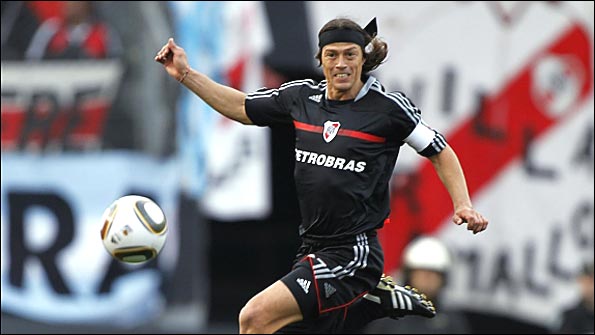 The main beneficiary of Ortega's creative ability is 19-year-old centre forward Rogelio Funes Mori, touted by some at the club as a new Hernan Crespo.

The rangy Funes Mori has an interesting life story. A decade ago, the Argentine economy collapsed and Funes Mori's family re-located to the USA. While he was there, he won a reality TV show with the aim of unearthing a new football star. Part of the prize was to spend some time training with Chelsea. His spell at Stamford Bridge coincided with a visit from one of River Plate's youth sides, who ended up taking him back to Argentina.

Another River Plate youngster who must feel as if he has spent his life in a reality TV programme is Erik Lamela.

The 18-year-old was given his first senior start against Newells on Sunday but has been a household name for six years. When he was 12, there was a huge fuss about Barcelona wanting to take him to Spain. River managed to hang on to him and developed him through their youth ranks. His promise was apparent in the hour he played against Newells. A lanky, left-sided midfielder, he showed composure, played some lovely left-footed passes and produced one excellent moment of tight dribbling skills when he took three defenders out of the game.

Lamela is half the age of fellow midfielder Almeyda. Funes Mori is only just over half the age of strike partner Ortega. They represent the twin extremes of contemporary South American football - veterans winding down and youngsters on the way up. In the middle are those who were not successful in Europe or who were never considered good enough to receive the call.

It means that Argentine crowds have very few opportunities to see top players performing in their peak years. But, on the other hand, with everyone in a permanent state of transition, there is no danger of the championship race becoming predictable.

Q) I was wondering about your opinion on leggy Colombia striker Giovanni Moreno. I get such delight from the languid way he expresses his ability but simultaneously recognise that he might not have the mentality to succeed at the highest level. What do you think are his prospects at Racing in Argentina? Has he moved at the right time?
Martha Fischer

A) I'm a fan. He has lots of imagination and ability. I am also optimistic about his mental strength. He is from a tough mining background in Colombia.

Problems? As you say, he is languid. Will he cope with the extra pace of the European game if and when he moves? As for his position, right up off the main striker, where space is tight, or a bit deeper where he might lack the acceleration to get into the box?

I do think, though, that he has made a good move. Argentina can serve as a good finishing school for Colombians and he is working with a top coach in Miguel Angel Russo.

Q) What do you think of Arsenal's new signing due to arrive in January, Wellington Silva? Do you think he could make it to the top?
Peter Hornsby

A) Tiny, talented and a very tricky support striker who can beat the defender on either side. Any move across continents is a gamble, especially so at this age. Can he cope with all the changes he is going through? I have heard that there are already fears about things going to his head.

He has been eased in gently, spending some time with Arsenal and then going back to Fluminense in Brazil. Recently on his return to Rio, he awarded himself some holiday at a time when the club had an injury crisis with their strikers. Coach Muricy Ramalho was not impressed. To be honest, I think I would have preferred for him to stay in Brazil and build a career at home for a couple of years before making the move.