Before Arsenal's massacre of Braga, the last time I was at a Champions League game was when the tournament was still called the European Cup.

In 1992 - a couple of years before moving off to Brazil - I was lucky enough to be at the old Wembley for the final between Barcelona and Sampdoria. It is one of my happiest football memories. The sun shone, London turned into the Mediterranean for the occasion and two excellent sides served up an enthralling game, decided in Barcelona's favour with a goal in the last minute of extra time.

The British media were wowed by the technique and intelligence on show from the two teams. It was light years in advance of anything that was being played in England, where clubs were still feeling their way back after the ban from European competition.

Eighteen years later, Barcelona remain a benchmark and the reigning champions of the continent are from Italy. In the meantime, English football has gone through enormous changes. Arsenal fans still refer to the North Bank and the Clock End but little else from 2010 would make sense from a perspective of eighteen years ago.

In 1992, it would've been all but impossible to predict that English football would become so successful and that so many people would be prepared to pay so much to watch it.

I can only offer the following explanation: In its mass form, British football was the product of industrial society. In the space of a generation, the country seems to have turned into a post-industrial theme park.

And in a world where ever-developing technology allows people to lead more de-socialised lives, football continues to offer a great communal experience, the chance to get in touch with the collective values of the industrial age - in a sanitised environment.

Too sanitised, some would say - and they would cite the atmosphere in the Emirates as evidence. The new ground is magnificent in terms of sight lines and supporter comfort. But fans and journalists kept telling me that the crowd are too quiet nowadays.

Here, perhaps, the stadium is a victim of its own modernity - and not just in the sense that it is not old enough to have established its own tradition.

Less than half an hour before kick off, the place was almost empty. There was no buzz, no sense of occasion. I was baffled. "It will be full by the start," a colleague said. And he was right. In an all-seater stadium with numbered seats and excellent access, there is no need to be in the ground early - which changes the whole dynamic. 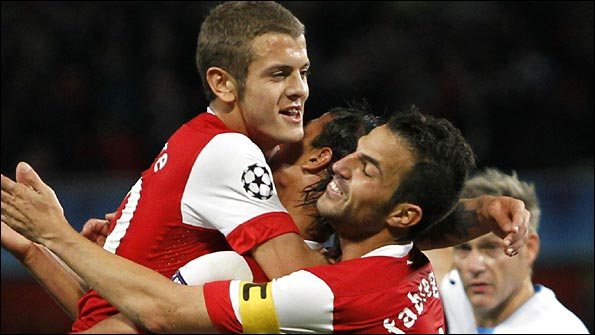 In South America, where I watch my football, the experience is more like pre-Taylor Report England. For big games, the fans are obliged to arrive in advance if they want a good view. The crowd then becomes part of the spectacle, with songs or mass displays. The supporters are an active part of an experience, which begins well before kick-off.

But at the Emirates, with the fans arriving in dribs and drabs, the pre-match entertainment is provided not on the terraces but via the big screen.

Sound quality is so good that an interview with a mumbling Arsene Wenger is clearly audible. The crowd, then, takes on a much more passive role. Little wonder that they are less noisy than before when then players eventually take the field.

But there is plenty to shout about. The tempo of the action can be breathtaking. The game is so much quicker than anything I'm used to in South America. And with the stands close to the pitch and the press box relatively low, it takes me a while to get my bearings. I'm as bemused as Braga's team of Brazilians.

Every time I go to a game in South America, I'm always hopeful of spotting some outstanding new talent, a youngster taking his first steps on the way to glory. To my surprise, the Emirates gives me this as well.

With his passing, forward movement and combination play, teenage midfielder Jack Wilshere makes a huge impression. Not since the emergence of Ever Banega in 2007 have I laid eyes on such a teenage central midfielder of such promise.

Wilshere benefits from something we cannot claim in South America - the chance to watch and learn from a master who is entering his peak years. 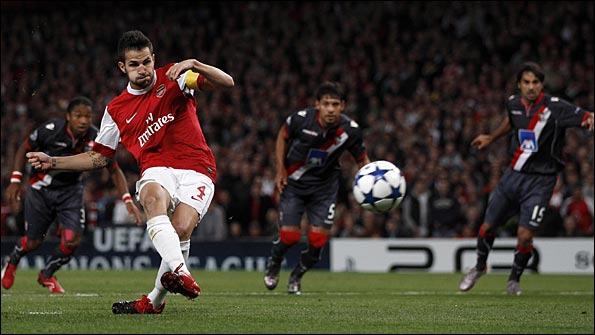 Cesc Fabregas scores from the spot against Braga. Photo: Reuters

The domestic game in my adopted continent can come up with exciting prospects and some top class veterans. But no one quite like Cesc Fabregas.

Football is about moving the ball with precision at pace - and Fabregas does that. His range of passing is superb, he has the calmness on the ball to select the right option and the physical dynamism to exert an influence on all phases of possession, from deep in his own half to deep in the opposing penalty area.

I've seen some fine performances from Juan Sebastian Veron of Estudiantes over the past couple of years but nothing of this calibre. Fabregas tore Braga to pieces. Back in 1992, it was inconceivable that a player like this would be playing football like this in a stadium like this in North London.

There may be fully justified gripes about ticket prices and lack of atmosphere. But - and I am not of the Arsenal persuasion - I left the Emirates more than a little jealous of those who are watching Arsene Wenger's team on a regular basis.