Uruguay have case for local support at World Cup

Once the World Cup hosts have got the action under way in South Africa on Friday afternoon the drone of the vuvuzelas might die down and the sound of drums should come through as the second game kicks off in Cape Town. They might sound straight out of Africa but the drums will be pounding for Uruguay, telling a tale that stretches across oceans, religions and races.

It is entirely fitting that Uruguay grabbed the last place in the 2010 tournament - and not only because they were the first champions. Africa's World Cup is surely strengthened by the presence of the country that did most to pioneer the selection of people of African descent.

One of them, Isabelino Gradin, was top scorer in the first Copa America in 1916. Three years later he played in the third version of the tournament in Brazil, where his presence had a huge motivational effect on his forbears from Africa, If ever a player deserves a statue for his influence on the development of the global game, it is Gradin.

His presence in the sky blue shirt of Uruguay was not a coincidence. It was the product of enlightened social policies in the country at the start of the 20th century, where Uruguay attempted to replace the feudal hierarchies so common in South America with a prototype welfare state.

Football came to the continent brought by the British and full of first world prestige. In Brazil the game endured a difficult journey as it spread down from well-heeled students to the sons of slaves. The aristocrats fought hard to keep it to themselves. Policies of social inclusion meant that this process took place quicker in Uruguay. The country had - and still has - a small population but it was soon able to call on talent from all backgrounds, which helps explain why Uruguay were so good so early.

The drums of candombe - the name of the Uruguayan rhythm - pounded out for Gradin and Jose Leandro Andrade, the hero of the triumphs of the 1920s, and for Obdulio Varela, the great captain of the 1950 side - nowadays they pound out for left wing-back Alvaro Pereira. But they don't just pound out for him. They do so for the whole team. Candombe has clear African roots but today's drummers are just as likely to be descendants of Spanish or Italian immigrants. The rhythm is part of Uruguay's cultural heritage.

Many of the South African population seem to have adopted Brazil as their second team. Perhaps they should also follow Uruguay - though not, of course, on 16 June when the Sky Blues are up against the Bafana Bafana and the vuvuzelas will drown out the candombe drums. 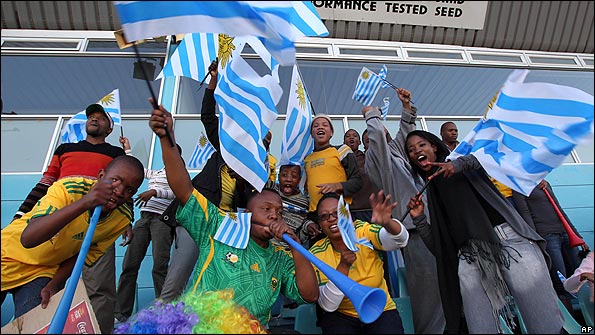 Uruguay are the first South American team in action in the World Cup. Chile are the last, which is probably just as well - there is more time for centre forward Humberto Suazo to recover from his hamstring injury.

I wonder if the problem Suazo has picked up was avoidable. If so, it means that coach Marcelo Bielsa has made a mistake with his physical preparation - as almost certainly happened eight years ago.

Bielsa is a self-confessed attack obsessive. He wants his team to play in the opponent's half, exerting constant pressure. It is high-tempo, high-pressure football, which requires a high level of fitness.

Back in 2002, when Bielsa was in charge of his native Argentina, the players were too drained at the end of the European season to carry out their coach's attacking ambitions.

In the build-up to the World Cup some of them complained to the Argentine media that they were being worked too hard in training. Their complaints looked justified when, in the warm-up before the opening match defensive linchpin Roberto Ayala pulled up with a tear and played no part in the competition - an important factor in their first round elimination.

This time, Suazo was carrying a knock when he joined up with the Chile squad last month. Giving a chance for fans in the provinces to wave off the side, Chile played a number of warm-up friendlies up and down the country. Suazo stayed out - until the last one against Israel, when he played, scored and then came off at half-time with the hamstring problem that may well force him out of Chile's first two World Cup ties.

Everything is easy in hindsight, but fielding Suazo against the Israelis looks like a mistake - Diego Maradona, for example, resisted the temptation to play Lionel Messi in Argentina's farewell game against Canada, even though the Buenos Aires crowd were calling for him. Messi had taken a knock in training and Maradona decided that the risk of playing him was not worth taking.

Bielsa perhaps wishes he had done the same. Suazo was South America's top scorer in qualifying and Chile have no clear replacement for him in their squad. As former great goalscorer Marcelo Salas put it: "We're going to miss him a lot because in the system Chile play, the centre forward is either Suazo or it's Suazo."

Comments on the piece in the space below. Other questions on South American football to vickerycolumn@hotmail.com, and I'll pick out a couple for next week.

A quick note of apology but I've got so much on at the moment that I don't have time to get back individually to all the questions, so I'm very sorry if you haven't had a reply. However, please keep sending them in - they all get read and considered and they all help in formulating themes for future columns.

Q) Does the economic necessity of exporting the next/new Messi or Kaka lead to young players in South America being hyped too early?
Stuart Bird

A) No doubt about it. The seller has a clear vested interest in hyping his product - remember when Birmingham were talked into believing that Luciano Figueroa was the new Batistuta? Also, with so many top players abroad it can be dangerously easy to build up huge reputations in the contemporary domestic game. It is easy to get caught up in the hype as well - a crime I have been guilty of along the way. I remember the rise of Robinho. One pundit, a player with World Cup experience, said that he was going to be better than Maradona! For all his talent, I think that is taking it way too far and makes it hard for the player to cope when he moves to Europe and finds out that he is not quite as outstanding as he had been led to believe.

I read an excellent article recently on Diego Milito by Juan Pablo Varsky, a very good Argentine journalist, making the point that this is a story of someone who benefited from being a late developer - as a kid nobody was telling Milito that he was some kind of phenomenon and he has grown into a far better player at 30 than he was at 20.

Q) I am living in Brazil at the moment and loving the build-up to the World Cup. One thing has surprised me though - like so many others I am taking part in a World Cup tipping competition but to my surprise not one of my friends or (girlfriend's) relatives here have picked Brazil to win it. One friend even has them bowing out in the group stage! I was wondering if this kind of pessimism is normal before a big competition or do Brazilians genuinely not fancy their team's chances in South Africa? If so, why?
Brendan Clark

A) Four years ago they all thought that Brazil had won the competition before it started and only had to turn up to collect the trophy. So they got burned that time. And this time there are plenty in the media who might have a quiet smirk at Dunga's failure - he has made plenty of enemies in the press. Throw in the fact that this side has been constructed on a team-over-stars basis, without the usual hubbub over big names, and it is understandable that this build-up is a bit low key - but nothing that a convincing victory cannot put right.