Uruguayan football on the rise

In 'Back Home,' his excellent account of the 1970 World Cup, Jeff Dawson does a disservice to the first kings of the global game - after 90 minutes of their quarter-final with the Soviet Union, he writes "the score is that old Uruguayan party piece, 0-0".

Just 16 years earlier, Uruguay produced a very different party piece in the 1954 World Cup in Switzerland. They beat Scotland 7-1, ended England's campaign in with a 4-2 win in the quarter-finals, but then fell 4-2, after extra time, to the great Hungarians in the semi-final.

It was the first time Uruguay had lost a World Cup match and six years later, when World Soccer magazine was launched, its inaugural edition carried a feature arguing that this was the greatest match ever played.

In recent decades it has been Brazil who have been renowned for artistic football, but once upon a time this image belonged to Uruguay.

In terms of their global standing, it is unfortunate that the Sky Blues' great days precede the age of television - and that subsequently some of their less attractive antics were beamed into living rooms all around the globe.

Semi-finalists once again in 1970, Uruguay were humiliated in '74, failed to qualify for '78 and '82 but hoped to make a glorious return at Mexico '86. Instead, in the second game, they were embarrassed 6-1 by Denmark.

With so much national pride tied up in prowess on the football field, this was hard to take. An aggressive mentality was a traditional part of their footballing make-up, but this became twisted into an ugly caricature as they took refuge in violence.

If Uruguay's reputation has improved since then, much of the credit must go to Oscar Washington Tabarez, who placed his calm intelligence at the service of his country's football and took charge at Italia '90, producing a ball-playing side without the ugly excesses of four years earlier.

But it is his current second spell in charge of the national team, which has seen them qualify for this summer's finals in South Africa, that looks particularly promising. 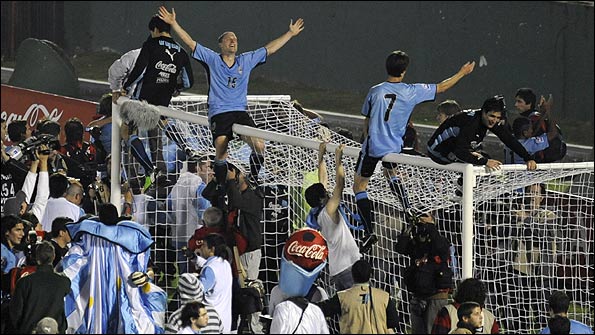 Tabarez is thinking in the long term, heading a project aimed at identifying technically gifted youngsters and developing them through the country's youth sides. Encouraging displays last year in the under-17 and under-20 World Cups show the project is on the right lines - and the evidence of this year's Copa Libertadores, Uruguayan clubs are also benefiting.

Nacional are one of the country's two giants, along with Penarol. They have won the Libertadores twice, but not since 1988. Last year they became the first Uruguayan club for 20 years to reach the semi-finals, with a team based around the subtle talents of playmaker Nicolas Lodeiro, since sold to Ajax.

With two wins and two draws, they have made a good start to this year's campaign, where the stand out has been another member of last year's under-20 team, gangling centre-back Sebastian Coates.

He was Man of the Match in last week's 2-0 victory away to dangerous Argentines Banfield. His aerial power was decisive - he scored one and set up the other - and he also defended well, especially after his experienced partner Lembo had to go off injured in the first half.

It meant that Coates had to take responsibility for leading the defensive line, and he did it in style.

Nacional have an impressive tradition in the Libertadores, but the same certainly cannot be said for Uruguay's other two entrants this year, Cerro and Racing. These are neighbourhood clubs, Montevideo's equivalent of Leyton Orient.

For them to qualify for the Libertadores is achievement enough - Cerro have taken part only once in the past, Racing are debutants. For them to hold their own in the competition is quite remarkable, but that is exactly what they are doing.

Half-way through the programme, Cerro top their group, while Racing are second in theirs, even though the two Uruguayan minnows can only draw tiny crowds to Montevideo's giant Centenario stadium.

Last week Cerro switched their home game with Internacional of Brazil to the city of Rivera, on the Brazilian border. It meant that they were effectively the away side, but they were comfortable enough in a 0-0 draw, having already beaten one Ecuadorian club at home and another away.

Racing's campaign is even more surprising. After overcoming Colombia's in-form Junior in the qualifying round, they suffered a narrow defeat away to Brazil's mighty Corinthians - Ronaldo, Roberto Carlos and all - but beat Cerro Porteno, Paraguay's most popular club, and last week played out a terrific 0-0 draw in an open and entertaining game away to Medellin of Colombia.

To put this in perspective, this is a club who half-way through the qualifying round lost captain Diego Scotti to the Spanish Second Division.

Hope, though, lies with the youngsters. Racing's most eye-catching figure is Matias Mirabaje, another member of last year's under-20 squad. Strong and with an exquisite left foot, Mirabaje has scored two well struck goals so far in the campaign, and rattled the post from long range against Medellin.

The fact that he is playing for such a tiny club makes Mirabaje a symbol of Uruguay's resurgence and suggests that, if it can keep grooming technically gifted players then this country of just 3.4m people will continue to punch above its weight on the football field - and that, surely, is a better course of action than punching below the belt.

Q) I would be really interested on your thoughts on Fabio Da Silva. I wonder whether you think that given Manchester United's expectations for full-backs to overlap may preclude a right-footed, left-back such as Fabio from integrating as effectively as his brother ? The game, at the absolute highest level, seems so fast now that it is highly unconventional for a full-back to play on the opposite flank to his natural foot ? Denis Irwin was an exception, but I struggle to think of a truly effective recent example, since even Philip Lahm has flaws.
Matt Savage

A) I remember when I first saw him, three years ago in the South American under-17s. It took me a couple of games to work out that he was right footed - he's very good with his left, far, far better than Philip Lahm. He can hit running crosses on the outside, so I see it as an extra virtue that he can cut in towards goal so well.
With United's tradition for wing play it shouldn't be a problem, as long as there's a left footer higher up to keep the pitch wide. Remember Brazil 82? Junior, right footed, cutting in from left back because Eder on the flank was creating the space.

Q) You have said that Maradona now seems to have settled upon his preferred first 11. With this in mind, will Higuain be spearheading Argentina's attack at the World Cup, as seems likely? Is there any chance that Aguero, Tevez and/or Milito will get a place in the first team, or will Maradona stick with the Real Madrid man, supported by Messi?
Stuart Bird

A) I think the attacking trident will be Higuain flanked by Messi and Di Maria. As options off the bench, this will leave Tevez, Aguero, Milito or Palermo and maybe Lavezzi.

A year or so back Maradona was talking in terms off persisting with the diddy men attack - Messi, Aguero, Tevez - but he said that the only way it could work would be with the time on the training ground that he will only have in the weeks leading up to the World Cup. He will obviously use this time to look at some variations, but that win over Germany has probably solidified his starting line-up.