This week is the last for international friendies before the end of the season. It's the final chance for fringe players to push their claims for a World Cup place.

Chile thought they had found the perfect way to give all their players the opportunity to show their stuff with a double-header on Wednesday against Costa Rica and North Korea, one after the other.

But then the country was struck by Saturday's massive earthquake and amid the chaos and confusion the matches could clearly not go ahead. The Uruguayan FA made a swift and noble offer to stage the games in Montevideo, so Chile's preparations for the World Cup would not be disturbed, but Chile decided that calling off the friendlies was the only appropriate step.

This is eerily reminiscent of 50 years ago, when Chile was preparing to stage the 1962 World Cup. On 22 May 1960 the country was hit by the biggest earthquake registered at that time, thousands died and millions were left homeless. It seemed inconceivable that a World Cup could be held there just two years later, but somehow the show went on. 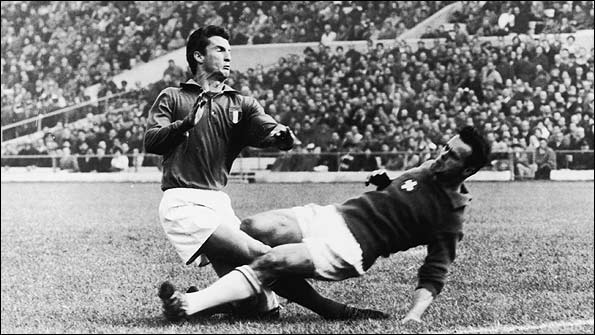 Chile had been awarded the competition in 1956 despite a strong challenge from rival bidder Argentina.

Accounts usually stress the oratory of Chile's Carlos Dittborn, who at the time was president of the South American Federation. "Because we have nothing," he famously said, "we want to do everything."

It became the slogan of that World Cup and perhaps even helped ensure that Chile kept the competition in spite of the ravages of the earthquake. As head of the local organising committee, Dittborn worked day and night to ensure that the event could take place but then died of a heart attack a month before the kick-off.

Changes had to be made - southern cities which had borne the brunt of the earthquake were too busy rebuilding to stage games and so, only four venues were used.

Some may feel the World Cup should not have gone ahead, that all of Chile's energies should have been spent on more pragmatic priorities. It is a respectable point of view, but it can also be argued that the event fulfilled a deep psychological need for a life-affirming celebration - especially as, with Lionel Sanchez leading the charge, the Chilean team exceeded expectations by finishing third.

The idea that the 1962 World Cup could in some way 'compensate' for the earthquake is clearly foolish and lacking in all sense of proportion. It couldn't bring back the many who died - the investment could help repair shattered buildings, but not shattered lives.

But the human being is a social animal and football - and especially international football - possesses an extraordinary power, a capacity for collective emotion and celebration unmatched in modern society.

The World Cup highlights this force at its most concentrated level. As the camera pans down a line of players during their national anthem, the faces on show are those of ordinary people, rather than the elite who meet in politics or diplomacy. The World Cup is like a United Nations General Assembly for the average Joe.

From Accra to Santiago, the man or woman in the street feels represented by the presence of his team at the World Cup - and when they win, with the whole planet watching, it is indeed reason for a party.

Chile needed the World Cup in 1962, and they need it now. Some good displays from Marcelo Bielsa's men in South Africa will give the whole country a lift, and if neutrals are looking for another reason to cheer on the Chileans this June and July, how about this tribute from Paraguay coach Gerardo Martino?

"The team in South America that is playing the best and proposing something different is Chile," he said a few months ago. "They have players with good technique, they play attractive football, get a lot of men forward into attacking positions, and look to attack in the cold, in the heat, at altitude, at sea level, at home, away..."

And surely in South Africa as well.

Q) I know that it is difficult to try and anticipate who is going to make Maradona's squad for the World Cup, never mind trying to anticipate the first XI. However, I was wondering if it looks like he will be selecting Benfica's Ángel Di María for South Africa and if so, what are the Dí María's chances of a place in the starting line-up?
Conor McCann

A) Maradona has had a look at so many players that your doubts are understandable. But in this case he's been very clear. He's a huge Di Maria fan, brought him straight into the squad and talked him up as the next likely Argentine superstar. He was only missing when he was suspended. Injuries aside, there seems no doubt that he's going to South Africa, and not just to make up the numbers. He'll play, either as a starter or as an impact sub.

Which of the two might depend on the shape of the team. With a back four, for example, I think he'll play left side of midfield. But if Maradona goes with a back three it will be more difficult to start him, because you couldn't see him carrying out the defensive responsibilities of a left wing-back.

Q) After watching Inter Milan v Chelsea the other night I am wondering why Milito, Zanetti and Samuel are not part of the Argentine starting line-up, especially seeing as they have a problem with a figure to spearhead the attack and their defence has been suspect for a while.
Ben Green

A) Samuel has just been recalled to the squad for Wednesday's game against Germany. Diego Milito is in as well. He's a mystery to me - every time I see him for Argentina he looks so ordinary, and I wonder how he scores all those goals in Italy. Higuain of Real Madrid has emerged as the spearhead, so Milito is fighting for a squad position.

Zanetti? If Maradona does go with a back four he might well be forced to recall him. Argentina are so light at full-back that there's not a lot else around. Clemente Rodriguez, who has been called up, is certainly not the solution, and Angeleri is only just coming back from injury, so Zanetti shouldn't give up hope just yet.