The legacy of Rene Higuita

Rene has walked away. And like the empty sidewalks in the old Four Tops hit, football is not the same. The game will miss Rene Higuita.

Of course, he had to produce the famous 'scorpion' save one last time. But for all its novelty value, the 'scorpion' is not the reason for Higuita's importance. Nor, in the final analysis, are the goals he scored. His free-kicks and penalties were no circus act, and they inspired a line of goalscoring South American goalkeepers.

No, there is a better reason for Higuita to be remembered. He was years ahead of his time. 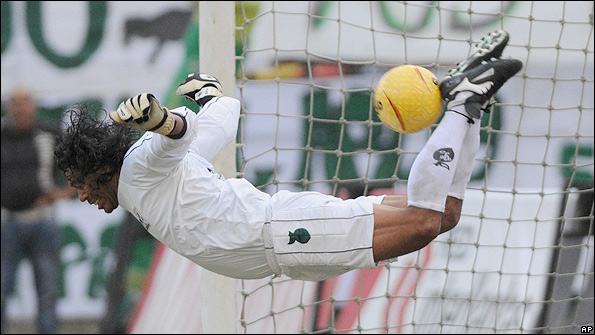 Higuita performs his 'scorpion' save for the final time

He was a pioneer when it came to his skill with the ball at his feet and in his willingness to take responsibility for situations 40 metres from goal. Before the change in the back pass rule obliged keepers to develop these abilities, he was already showing that a team is made up of 11 footballers, not of 10 players and a goalkeeper.

This had important tactical ramifications, helping forge the style of the Colombia team of the late '80s and early '90s.

With Higuita behind them, the defensive line could push higher up the field, pressing the opposition to win the ball back. Then, when in possession, they were a more compact unit, with lots of options for their trademark short passing.

It was a South American twist on some of the ideas of the great Holland side of 1974.

Colombia coach Francisco Maturana acknowledged the debt and stressed the importance of his goalkeeper to the system.

Higuita, he wrote shortly before the 1990 World Cup, "gives us something no one else has, and we take full advantage. With Rene as sweeper, we have 11 outfield players.... Jan Jongbloed, the Holland keeper in the 1974 World Cup, also operated as a sweeper. With a difference. The Dutchman came out just to boot the ball into the stands. Higuita can do much more."

In the event, Maturana probably wished Higuita had blasted the ball into Row Y.

In the second-round game against Cameroon, just as the Colombian TV commentator was describing Higuita as "an exceptional sweeper", wily Roger Milla robbed him outside his area and raced away to score what proved to be the decisive goal.

This, though, was the price Colombia paid for their style of play. Higuita made no effort to hide his error, seemed strong enough to live with it, and the whole thing could be written off as experience on the way to USA 94.

For me, it is one of the big 'what ifs' of football history. What might have happened had Rene Higuita been able to play in that World Cup 16 years ago?

Placed among the pre-tournament favourites, Colombia's campaign quickly blew up in tears and tragedy - real tragedy, with centre back Andres Escobar murdered in Medellin a few days after their first-round elimination.

It's easy to forget what a good side Colombia were.

They went into USA 94 on a run of one defeat in 34 games, including a 5-0 win in Buenos Aires, the first time Argentina had ever lost a World Cup qualifier at home.

The Colombia team that went to USA 94 had lots of merits - but did not have its goalkeeper. Higuita was in jail - harshly, as the authorities now admit.

He had been called in to act as an intermediary in a kidnapping case. Receiving money for his actions was against the rules.

Colombia were not the same side without him. Young replacement Oscar Cordoba was a competent shot stopper. He had done well in Buenos Aires. But on that occasion, Argentina were doing the pressing.

The World Cup debut against Romania was very different. Hagi and co were the counter-attacking specialists. Colombia played some beautiful football, but this was a game where they needed the keeper to play his sweeper's role. Cordoba couldn't. His decision making was exposed, and Romania won 3-1.

And if Colombia had missed Higuita from a technical point of view, now they really needed him from a psychological perspective. 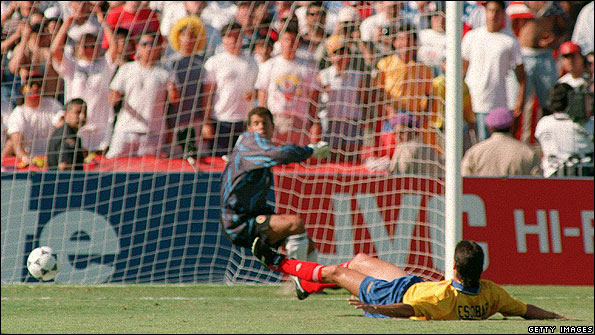 All the pressure was on the second game against the USA. The Colombia team had been receiving death threats since before Italia 90. But now, with the spotlight on them, the stakes were so much higher.

Drug cartels were running amok, politicians, judges and journalists were routinely assassinated. The death threats reaching the national team were taken very seriously. The dressing room was in panic. The team were a nervous wreck.

Faustino Asprilla later confessed that during the national anthems he was glancing round the stadium wondering where the shot was going to come from. In no state to play a World Cup match, they lost again.

Higuita might have made a difference. He seemed nerveless. His antics had traditionally filled his team-mates with confidence.

Against England at Wembley in 1988, he dribbled round Gary Lineker, "as if it was a park game back home," recalled Maturana. "And if Higuita could play his normal, natural game, then the others had to follow his example. And we started playing our football."

His team were well worth their 1-1 draw. This, for them, was a huge occasion, their first big trip to Europe. Holding England at Wembley was seen in Colombia as the day their football came of age.

Their equaliser that night was scored by Andres Escobar. Six years later, his own goal against the USA ended up costing him his life. It's a mark of the importance of Higuita that it is conceivable that events would have take a different turn had he been around.

Comments on the piece in the space provided. Questions on South American football to vickerycolumn@hotmail.com, and I'll pick out a couple for next week.
From last week's postbag:

These transfers in Brazilian football - I'm really interested to find out how they are being funded. It's something that's been on my mind for a while, and even more so now Robinho is at Santos.

Apparently they are paying all his wages and bonuses? How is this possible? Are they relying on improved gates from when he plays or have sponsors/investors stepped in to fund the loan?

I've been told this is how it happened when Corinthians signed Ronaldo. With Vagner Love, Roberto Carlos and Adriano all now playing in Brazil, as well as Botafogo signing Abreu it seems like there must be a lot more money in the league. Is that the case?

I believe almost all of the money will come from sponsors, as is the case with Adriano, Fred and a few others. Ronaldo is not so much an employee of Corinthians, more a partner who gets a cut of merchandise sales in addition to his basic wage, funded by sponsors.

The big trend here, I think, is the professionalisation of marketing departments, which, together with the size of the internal market and the strength of the Brazilian currency, is making these deals viable.

There are some players earning big money here now, although the drift to Europe shows no sign of stopping. So it would be unwise to go overboard.

As Sao Paulo director Marco Aurelio Cunha says, the return moves are "a short term strategy [ie to gain visibility in the run up to the World Cup], or an option at the end of a career."

As regards the signing by Botafogo of the Uruguayan Abreu, this highlights another growing trend.

In general, first division wages in Brazil are considerably higher than elsewhere in the continent. As Brazil starts to open up to its neighbours, we're seeing more players from the rest of South America come in.