The two sides of Lionel Messi

The candidates were announced last week for the Fifa World Player of the Year award. Am I the only one out there who's not too interested?

My problem with the thing is that this concentration on the individual can tend to overshadow one of the fundamental truths of the game - the stars shine brightest when the collective balance of the team is right.

The point is proved by a brief look at the performances this year of one of the favourites. Based on what he has done for Barcelona, Lionel Messi would be a worthy winner - but that would certainly not be the case if the criteria was restricted to his form with Argentina. How can this be true?

For a start I think we can discount the leaden-minded nationalistic nonsense that Messi lacks motivation when he plays for his national team, that he is too European, and so on.

The foreign-based legion of Brazil and Argentina frequently become exasperated by this line of criticism, and I can understand why.

They make sacrifices to play for their national team which many Europeans would not be willing to go through.

In the case of Messi, he was the only Argentine, and one of only four players in the entire continent, to play all 18 rounds of South America's World Cup qualifiers. I think we can conclude that he is every bit as motivated to play for Argentina as he is with Barcelona. He's the same player, the ball is the same shape and the pitch is the same size. So what's the problem?

Surely it lies in the fact that Barcelona are a team in the plenitude of the word. They are set up to get the best out of him. Xavi and Iniesta give him the ball with quality, Daniel Alves breaks outside him to stretch the opposing defence and create room for his darts infield, and when he cuts in on the diagonal, Zlatan Ibrahimovic is there to exchange passes.

In a Barcelona shirt he is surrounded by friends and allies. For Argentina he is just surrounded. He beats one opponent, and another three are waiting to stifle him. 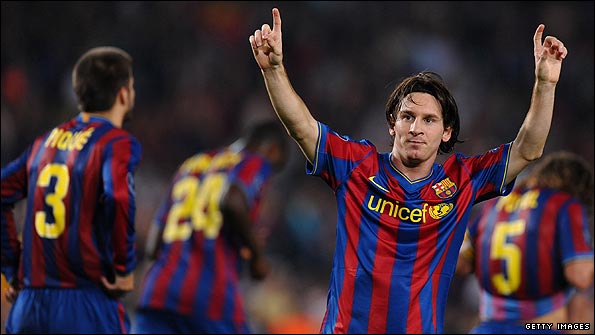 Now that Argentina have qualified for the World Cup, Diego Maradona has to turn his mind to this question. Time is tight. Next year there is only one Fifa date before the end of the season. So the two dates later this month are important - and the squad named last week holds clues to the coach's mindset.

Maradona appears to have high hopes of the link-up between Messi and Juan Sebastian Veron - who combined well last month to set up the crucial goal against Uruguay. For this month's games so far he has only called up his European-based players, but it would make sense to rest Veron this time - the midfielder is 34, and has his short term sights set on next month's Club World Championship.

If Veron does end up being left out of the coming match against Spain, there have been recalls for Fernando Gago and Esteban Cambiasso, might Maradona be thinking of playing three in central midfield - so in the World Cup it might be Veron in front of Mascherano and either Gago or Cambiasso? That way he keeps Veron central, with a full vision of the game, where he can get close to Messi, but also has sufficient cover behind him.

The only way this seems viable is with a back three, and wing backs to supply the width. This is what makes the recall of Maxi Rodriguez intriguing. Is this because Maradona is giving up on his full backs and instead thinking of Rodriguez and either Jonas Gutierrez or Angel Di Maria to work the flanks?

At the heart of all these ruminations must surely be the desire to give Messi a structure similar to the one he enjoys at Barcelona - Veron behind him, Rodriguez outside him, and the hope of a growing relationship with new centre forward Gonzalo Higuain.

After one poor performance against Peru, Emiliano Insua was left out. But if there was bad news last week for one Liverpool left-back, there was good news for another. Fabio Aurelio was called up by Brazil as part of their squad to face England and Oman. In a strong indication that the left-back position is still up for grabs, Michel Bastos was also included for the first time.

Two other new players drafted in look on less solid ground in their hopes of a World Cup place. Coach Dunga is unlikely to add any domestically-based players to his squad.

The Brazilian Championship is in its closing stages, and there is no pause to coincide with the international dates. Adriano of Flamengo and Diego Tardelli of Atletico Mineiro are both in scintillating form as their clubs push for the title. The strength of Porto's Hulk makes him a stand in for Adriano, the mobility of Hoffenheim's Carlos Eduardo substitutes that of Tardelli. Both the new boys will have to do something very special to get past the home based boys and nail down a definitive place in the squad.

Unlike Argentina, there is no need for Brazil to pull apart their side and try and put the pieces back together in the search for a winning formula. Brazil qualified in comfort, as did Chile, who make just one significant change in their list of foreign-based players for coming games against Germany and Slovakia.

There is a recall for excellent holding midfielder Claudio Maldonado. Unobtrusive but effective, Maldonado is not the kind of figure ever likely to be nominated for a Fifa World Player of the Year award. But he is the type to balance out a team and give a platform for the stars to shine.

Q) I'm sure you've heard about the Brazilian Division Two match where a team apparently scored nine goals in the last nine minutes to secure promotion.

Did this really happen? And if so, while being on the one hand "hilarious", surely on the other it's a disgrace and something very worrying to see in a professional football association. Has it cast any doubts on the integrity of soccer in Brazil, and do you think that any implications will arise from this incident?
Dan Casey

A) It's much lower down the food chain than people might imagine. This did not take place in the national second division. Brazil is divided into 27 states - this was the second division in one of those states, and a fairly remote one at that. So the players at some of these clubs might be professionals, but only just. Salaries will be very, very low - which can increase temptation in cases such as these. Perhaps the main implication is that these days, in the era of mass technology, it's not possible to get away with something this blatant.

Q) As a Liverpool fan, I was recently discussing what players could be signed on the cheap in January to help boost our thin squad, and someone mentioned Adriano. Apparently, he has a clause in his contract that will allow him to leave for free in January should a big club from Europe come along and try to sign him.

I was wondering whether you could confirm whether this is true or not? How has his form been in South America over the past year? Do you think he would make a good signing for us, and would he be willing to come?
James Blattman

A) He's in superb form for Flamengo - sometimes he looks like an adult playing with kids. His agent, though, is saying that he doesn't want to know about a move back to Europe at least until after the World Cup - and after his psychological problems and battle with alcohol abuse in Italy it might take a brave club to risk money on him even then.