"Would any South American nation," asks reader Craig Thompson, " consider appointing a European coach (specifically Italian), and would the coach succeed with a South American team?"

There are a few precedents here. Jack Greenwell from England took Peru to victory in the 1939 Copa America. More recently, Xavier Azkargorta from Spain qualified Bolivia for the 1994 World Cup. And at around the same time Dussan Draskovic from Montenegro played an important part in the early stages of Ecuador's rise.

Paraguay also give us some examples, especially relevant since the question specifically asked about Italians. Vessilio Bartoli was in charge of the national team in the 50s. He had previously enjoyed considerable success in domestic Paraguayan football, which was not true of the most recent case, that of Cesare Maldini, who parachuted in from Italy to take Paraguay to the 2002 World Cup.

This is an especially interesting example because Maldini's time in charge was emphatically not considered a success. He upset local sensibilities by getting the name of local clubs wrong, the players did not take to him - the whole experience illustrated how hard it can be for an outsider to walk in to such an environment.

South America is a million miles away from contemporary, cosmopolitan western Europe. Distances are vast, mass salaries are low, air travel is expensive. There has been little significant mass immigration to the continent in decades.

Ideas of nationality, then, tend to be relatively fixed. The national football team is a hugely important symbol of this identity. It represents the country in physical terms and also defends the national conception of how football should be played.

This, of course, also applies to the western European countries - but surely these days to a lesser extent. From the other side of the Atlantic I was amazed by how the English footballing public seemed willing to accept the ultra-cautious approach in major tournaments of Sven-Goran Eriksson.

It certainly wasn't the same "get it in there" English crowds I had grown up with. But then, as stated earlier, English football and society have gone through a process of cosmopolitanisation which changes ideas and identities.

South America has gone through no such process. A master group former like Luiz Felipe Scolari was not able to adapt his methods to a multi-national squad at Chelsea.

Going the other way, a European taking charge of a South American national team must get to grips with the dominant cultural identity in his new country.

This can be difficult even within South America. The great Argentine player, Jose Omar Pastoriza did an important job laying the groundwork for the recent rise of Venezuela.

But results only improved after he had been replaced by Venezuelan coaches more in tune with the idiosyncrasies of the players.

It can be easier for a foreign coach to stand outside the fuedings between the two rival cities, Quito and Guayaquil, and Ecuador were able to do this while taking advantage of the experience their imported coaches had acquired with Colombia in the 1990s - and all this without major problems of cultural adaptation, since the two countries are neighbours and for a while were even part of the same nation.

But the normal movement of coaches in South America is northwards - from the continent's traditional big three, Argentina, Brazil and Uruguay, to those nations where the game caught on later.

Uruguayans have gone all over. Anibal Ruiz took Paraguay to the last World Cup, and Sergio Markarian qualified them for 2002 before he was unwisely replaced by Cesare Maldini.

But it's Argentines who can crow at the moment, with Gerardo Martino qualifying Paraguay for next year's World Cup, and Marcelo Bielsa doing likewise with Chile. 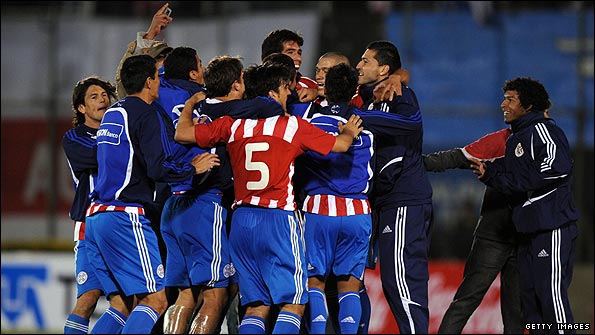 The pair go way back. Bielsa's first senior job was in charge of Newells Old Boys in Argentina. Martino was the star midfielder. The relationship worked - both like to attack.
Martino has tried to carry this attacking approach to Paraguay.

I well recall his first competitive game in charge. Paraguay beat Colombia 5-0 in the 2007 Copa America, but Martino was not happy. It had been a counter-attacking triumph, but the coach had wanted his team to play high up the field and keep their opponents under pressure.

This tension promises to be interesting in the World Cup. Deep, dogged defence is part of the DNA of the Paraguayan national team, especially against physically stronger opponents. Martino has recognised the need for pragmatism, but he will still try to convince his team to take the initiative. It could be an uphill struggle.

Marcelo Bielsa is unlikely to face the same problem. His 3-3-1-3 system, with its two wingers and commitment to playing in the opponent's half, has gone down well in Chile.
Bielsa was previously in charge of his native Argentina, where even while his team sailed through the 2002 qualifiers his methods were always questioned.

For the traditional Argentine purists his team was too European. With its constant high tempo, there was no place for an old style foot-on-the-ball playmaker like Riquelme.
Chile has proved easier to win over. One of Chile's all-time greats, defender Elias Figueroa, once told me that in the past the national side "have tried to imitate Argentina. We've tried to imitate Brazil. We've tried to imitate Germany and Spain. There's been no continuity."

But it could well be that this lack of a defined identity, unusual in South America, has made it easier for Bielsa to implant his tactical model. It means there is less cultural resistance, no sense of betraying a deeply loved tradition. There was even a proposal to award Bielsa Chilean citizenship. It would not be appropriate. A fascinating, brooding obsessive, Bielsa owes his allegiance to the global community of football.

Q) I've noticed that Boca and especially River are struggling in the Argentinian Primera Division. Boca are currently 10th while River, having just won one out of their first nine games, are in 16th position. Can you give us some reasons for their poor results.
Terje Dahl

A) And they've just drawn 1-1 in the modestly entitled 'super-clasico,' not a result that does much good to either. I think River are mired in an institutional crisis. There seems to be something very wrong with the set-up there, with hooligans having a say in the running of the club and even (allegedly) a share in transfer revenues. None of the players seem to be making progress, and that's usually a sign of something wrong behind the scenes.

In Boca's case, I think a measure of instability is built into their model. They've had a lot of success producing players, keeping hold of them for a couple of years and then selling, and thus financing their squad. But there comes a time when you've sold key players, and the veterans are not quite what they were, and results suffer while the next group of youngsters are coming through.

Q) I recently went to watch the River v Independiente game in BA. The question I have is about the River centre-forward, no.23 (Fabiani) i think his name is. He looked like a Mark Viduka-type player, good feet, good with his back to goal and looked the most likely to score. Where has he come from, how old is he and does he have a big future?
Ed Middleton

A) Cristian Fabbiani is a River fan who joined the club at the start of the year from Newells - before that he'd played in Chile, Israel and with Cluj in Romania. He is talented, as you say, excellent with his back to goal. But he's already 26, and if he's going to get the most from his talent then he still needs to work at his fitness.

He's lost some, but he's still carrying too much weight - hence his 'Ogre' nickname, and the fans turning up wearing 'Shrek' costumes in his honour. As I mentioned in the previous answer, there are lots of players there - Abelairas, Buonanotte, Rios, Cabral, Domingo - who look like terrific prospects but are not coming through. Time is not on Fabbiani's side is he's gong to buck this trend.