As the Argentina squad drove sadly away from the stadium in Rosario on Saturday night there were no protests from the supporters who were still milling around. Despite the 3-1 defeat by Brazil there was applause and shouts of encouragement.

So much for the team bus, but what about the coach? Argentina's struggle to qualify for next year's World Cup will inevitably be personalised. It is not just Argentina who are stumbling, it is "Diego Maradona's Argentina". How much responsibility should the little man bear for his team's current plight?

When Maradona was appointed almost a year ago, I commented here that Argentina's qualification was by no means assured. The team was already in trouble after predecessor Alfio Basile's reign ended with a run of one win in seven matches despite fixtures easier than those Maradona has had to face. So the situation he inherited was far from comfortable. 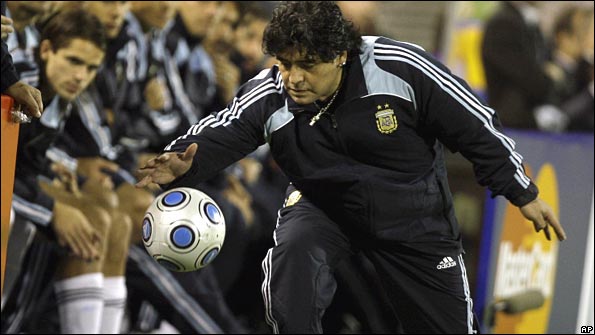 Soon afterwards, of course, came the spat with Juan Roman Riquelme which led to the playmaker withdrawing from international football. It is not an episode which shows either coach or player in their best light - but for all my appreciation of Riquelme's art, I don't see it as a huge factor in the current problems.

Firstly, Riquelme was the king of the side that was already struggling under Basile. Secondly, Riquelme's absence has allowed Juan Sebastian Veron more freedom to show what he can do.

Veron ran the game for the first 20 minutes in Rosario. Brazil can have problems against deep lying playmakers - think how Zinedine Zidane ripped them apart in the last World Cup - and this time Maradona seemed to have the balance of his midfield right.

In the previous home game, a streaky 1-0 win over Colombia, the balance was all wrong. The Veron-Messi axis is vital - but there must also be width to create space for the interpassing through the middle. Against Colombia there had been none - this time there was plenty, with Jesus Datolo on the left and, especially, Maxi Rodriguez providing thrust down the right.

This is where Brazil can be vulnerable. The side is set up to free Maicon's forward bursts from right-back. Elano is there to cover, and Gilberto Silva can drop in like a third centre back. But then, fellow midfielder Felipe Melo can be drawn across and left-back Andre Santos is left unprotected.

This was the space that Veron kept trying to create and hit - suck Brazil in and slip Rodriguez or Carlos Tevez behind the full-back.

It stretched Brazil and it could have worked. But, as so often in the last couple of years, there was a glaring lack of a centre-forward to get across in front of his marker and convert the crosses.

It is hard to blame Maradona for this. It can certainly be argued that he shows an excessive faith in Tevez, but unless Hernan Crespo can stage a last hurrah there is a dearth of quality target men. Diego Milito looks very ordinary at this level, which makes it curious that Gonzalo Higuain is still ignored.

But if Argentina could not win the game in Brazil's penalty area, they could lose it in their own. Brazil's strength and versatility from set pieces is well known. Maradona said that his men had worked hard on dealing with it in training.

Step one is not to be caught committing unnecessary fouls that provide Brazil with the opportunity. Step two is coping with the aerial ball and the movement of Brazil's phalanx of giants. The game was taken away from Argentina because neither was carried out adequately which, with the defence Maradona fielded, is hardly a surprise.

Nicolas Otamendi is a promising young centre-back. His Velez Sarsfield club partner Seba Dominguez is not. Slow and out of his depth, Dominguez was thrown to the lions.

His was not a good selection but then again Maradona is not over-burdened with alternatives. Experienced, quality centre-backs such as Walter Samuel and Gaby Milito are injury prone. Young pretenders like Ezequiel Garay and Juan Forlin have yet to turn promise into reality.

Here, Argentina are suffering from the absence of Roberto Ayala, the long term defensive lynchpin who called it a day after the 2007 Copa America. The history of international football shows again and again the difficulty of replacing outstanding players and Ayala was in that class for Argentina.

The tricky fixtures, deficiencies in both penalty areas - it is unfair to blame Maradona for all of this. But, from the safety of the press box, I would humbly suggest that he made a mess of his half-time substitution on Saturday.

Two-nil down, there was nothing wrong with the entry of Sergio Aguero, who probably should have started in place of Tevez. The problem was the player withdrawn.

After the match Maradona kept repeating that the team had been playing well, controlling the match until they failed to defend the first cross they faced. 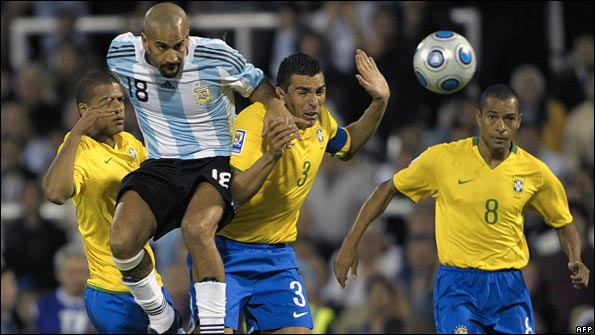 Seba Veron in action for Argentina against Brazil

His analysis would indicate that the central idea of the team was sound. But when he pulled off Rodriguez at the interval the idea was abandoned.

With a striker on for the right-sided midfielder, disorder reigned. Veron went right, too far from the centre to influence things, and now without his outball to Rodriguez. It left Argentina looking desperate, trying to force their way rather than playing their way through.

It also left them very open to Brazil's other great weapon - the counter-attack. Suddenly Kaka had space to work in. True, Argentina pulled one back. But it was no surprise when Kaka instantly set up Luis Fabiano for the clinching goal.

By opening up to Brazil's counter-attack, in the second half Argentina were not playing football. They were gambling on the lottery, with the odds against them.

Better, surely, to keep faith with the original shape of the side, keep passing and trust that the more the game goes on Brazil will tire of chasing after the ball and spaces will appear.

Maintaining the original shape at half-time would have taken a steady hand in a crisis - and Maradona, of course, is learning on the job. He needs to do it quickly - on Wednesday comes another difficult game away to Paraguay.

Q) Can you shed any light on the career of Giovanni Hernández, currently playing at Atletico Junior? On a recent trip to Colombia I watched him play in the Colombian cup final and whilst they eventually lost comfortably to Once, Caldez, I thought his touch and the way he orchestrated the pace of the game was at times worthy of the Premiership if not a Champions League team. I spoke to some Colombians and they said he never made the trip across to Europe. Was he ever linked or are there 'issues' that prevented this?
Phil Jenkins

A) A lovely player, but an infuriating one. Perhaps the burden of being built up as the great successor to Valderrama proved too much for him, maybe he's simply not mentally strong enough to shine at the very highest level in a position made increasingly difficult by the physical development of the game.

He still figures for Colombia - and he was first capped when they had a look at him before the 1998 World Cup. He came off the bench against Ecuador - I was at Argentina-Brazil so didn't see the game. But the reports say that he helped tip the balance Colombia's way in their 2-0 win. A little frustrating cameo of what might have been.

Q) Would appreciate some info about Stoke's new 21-year-old Uruguayan holding-midfielder, Diego Arismendi. I hear he's won player of the year for his club two years on the trot, while he's also been given his first two international caps recently. However you are forever warning of the dangers of South Americans moving too early, so could this be the case with Arismendi? Mark Hughes

A) No, I think he'll be able to hold his own. Stoke have clearly gone for him in part because of his height - he's a gangling figure, strong, no frills, good in the air so I think he can fit in to Stoke's style of play.

He's also packed a great deal of experience into his 21 years - I've been following him since the South American Under-17s back in 2005, and every step up that he's taken has been accomplished comfortably. I remember him as a teenager taking a crunch penalty against Boca Juniors - so top marks for temperament.