A few month's back on Radio 5's World Football Phone-In (Friday night/Saturday morning, normally between 2.30 am and 4am if you care to join us), the excellent analyst of European football, Andy Brassell, was talking about the first Champions League game he attended in Italy.

He had a shock. An English team was involved, but the match stewards could not speak English. In my wanderings around South America, however, I would get a similar shock if I saw such a thing as a steward.

I have often put forward the view that part of the explanation for the extraordinary global success of football is that the game is a universal language which we speak with different accents.

Football's apparent simplicity contains a vast range of options. A player can pass right or left-footed, short or long, forwards, backwards or sideways, in the air or on the ground - or he can run with the ball if the fancy takes him, and use his head, chest or thigh to bring it under control or move it around the field.

With such variety on offer, individuals and groups can express themselves physically and mentally by the choices they make.

Cultural differences don't only apply to the game on the field. They are also present in the way the game is administered - and the way it is watched

In his groundbreaking book 'Football Against the Enemy,' Simon Kuper described the experience of going to a game in Moscow in the early 90s. "I reflected on what a perfect tourist event a Russian football match was," he writes.

"It was an authentic Russian occasion, for the game was not staged for our benefit, and nobody even cared we were there; the setting and the fans' behaviour was so similar that we could recognise differences between it and England; there were real local passions on display; good sport; and all that for three pence." 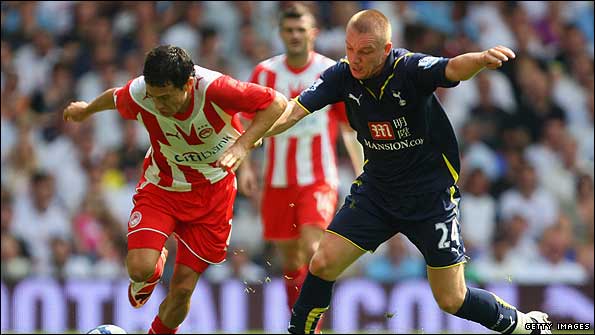 I paid a fair bit more than three pence earlier this month when, back in England for August, I took my Brazilian girlfriend to games at West Ham and Tottenham.

But the point remains. Going to a football match is an excellent activity for visitors, not least because appreciation of the event does not require language skills. She doesn't speak much English (though she can now chant 'Who are you?) but can still enjoy the occasion for itself and also make comparisons with the experience back in Rio.

Many things made an impression on her - the patience of the fans, for example, their perpetual encouragement and reluctance to turn against their own team after a misplaced pass.

But it was the organisational aspects that struck her most - modern, clean, compact stadiums with the fans close to the pitch, numbered seating where the numbering is respected, toilets in excellent condition. All these things combined to create an environment that, unlike Brazil, she found safe and welcoming.

I explained how this is a relatively new development, how a traditional culture of football watching was rapidly replaced following the trauma of Hillsbrough and Bradford and the entry of new money.

There are, of course, dangers in all these changes. Contemporary English football needs its critics, pricking its hype bubble, bemoaning its commercialisation and fearing that excessive prices are excluding the future generation of players and thus jeopardising the soul of the game.

But English football is clearly doing something right. The matches we saw were pre-season friendlies - both with crowds considerably higher than the average in the Brazilian First Division. And the most extraordinary thing is the depth of this popularity.

The same is true of the Championship (for foreign readers, the name used in England to refer to the Second Division) - all Saturday's games attracted crowds over 10,000, with only three below the Brazilian top-flight average of 15,000.

It is powerful evidence for the view that the new money has been attracted in large part because the old culture is so well-entrenched.

I tend to see this in connection with the country's industrial past. In its mass form, British football was the creation of the world's first industrial society, with its sense of community and its labour intensive emphasis on physical strength and reliability.

The domestic game's crisis years were those of the crisis of industrial society and now, in a time of uncertainty and bewildering technological change, football offers an opportunity to get back in contact with the collective values of the industrial age - in this new, safe and sanitized manner which so impressed my girlfriend.

Back in her homeland, a different dynamic is in effect and Sports Minister Orlando Silva is aware that the local game has fallen a long way behind.

"Brazilian football could be better and stronger," he said earlier this month. "There is no pre-occupation in having safe and comfortable stadiums to increase the crowds, or altering the kick-off times to get more people into the stadiums. The problem is that in Brazil the principal source of income is selling players."

The other major source is TV rights, which he touched on obliquely in his complaint about the kick off times - the powerful TV Globo ensures that the big evening matches get underway around 10 at night, after the main soap opera.

This leaves South American football with an awkward question. In a model of administration where, compared with player sales and TV rights, the money paid by the fan at the gate is relatively unimportant, why bother investing in supporter comfort?

Q) I would very much like to hear you opinion on Éver Banega's impending move to Everton. Following observation of Banega's performances throughout the 2007 U20 World Cup in Canada, I had extremely high hopes for his future career. I particularly enjoyed the way he dictated the rhythm of the side with his intelligent and imaginative passing and his performances were reminiscent of one of my favourite players - Juan Roman Riquelme.

Do you think Éver will be equipped for life in the premier league and will Moyes be able to coax the best out of him or will this be another case of a talented player leaving South America too soon and falling by the wayside?

A) I'm a huge fan, but I share your concerns. I first saw him during the South American Under-20 Championships in Paraguay at the start of 2007, and the excellence of his passing meant that he was in my notebook within the first 30 seconds of the first game.

I wrote at the time in World Soccer magazine that this was a player who would be best advised to develop in Argentina for a few years before making the move - but the money talks, he walked into a very difficult situation at Valencia, was unable to make much of an impression at Atletico and is now heading for another awkward situation at Everton.

I never really imagined him as a natural for the Premier League - but he is much more of an all rounder than Riquelme. He spent a year at Boca playing the holding role in midfield, which put a strain on his defensive abilities but did ensure that the first pass forward was played with quality.

I'd love to see him come off - to do so will take some patience and careful handling from Moyes as well as a real desire to knuckle down and adapt on his part.

Q) I am a keen listener to the World Football Phone In and last time my ears pricked up as you mentioned that the Chilean coach employs a 3-3-1-3 formation, apparently to great success.

I would be interested to find out what you think would be required of the players if a 3-3-1-3 formation was to be employed and if it would be a successful tactic if used in the English Premiership, or any of the European leagues.

My own view is that it would lack width and a team would need to have a star man to boss the midfield in order to make it work, the strikers would need to work hard to find space and the attacking midfielder (the 1, in the 3-3-1-3) would have to be careful not to get pressured out of the game.

A) It's a personal thing of Marcelo Bielsa, the fascinating Argentine coach in charge of Chile. He wants to attack, and he wants the game to take place in the opposing half of the field, so he reasons that there is little use in the conventional full back.

He has one more defender than the opposing strikers - ie they come with two, he has three back, two to mark, one to cover and a defensive midfielder in front.

There is no lack of width. The idea is to have the constant creation of two v ones down the flanks, with wide midfielders linking up with the two wingers. The more obvious problem is the space left behind and the vulnerability to the counter-attack.

Bielsa seems to be interpreting the system with more flexibility now than when he was in charge of Argentina at the start of the decade. Then, the central striker seemed to get squeezed into the box without much space to work in. Now there's more inter-changing going on between the central striker (Suazo) and the attacking midfielder Fernandez.

It's a high pressure, high tempo philosophy that requires excellent levels of fitness. Argentina's big problem in the 2002 World Cup was that, drained at the end of the European season, the players didn't have enough gas in the tank to carry out their attacking intentions.