I recall an English club chairman indignantly saying some 20 years ago that the fans were mad if they believed their ticket money paid the players' wages.

It was a classic case of someone knowing the price of everything and the value of nothing. True, in cold, economic terms he might have been correct. Money pours in from other sources - TV rights, sponsorship deals, corporate boxes and so on, but take the fans away from the stadium and all those other revenue streams instantly dry up.

That is because the football supporter is part of the show. Without the atmosphere created by the fans, the TV rights and the corporate boxes lose their value. The supporter is not a spectator. He/she is a participant, whose actions have an effect on what happens on the field.

This explains why Argentina coach Diego Maradona was so keen to switch the venue for Saturday's crunch World Cup qualifier at home to Brazil. 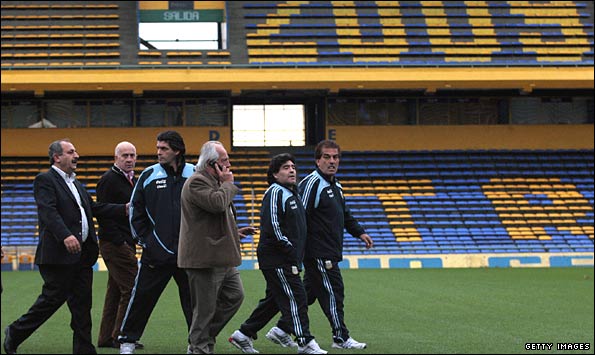 Argentina traditionally stage their matches in Buenos Aires, in River Plate's Monumental stadium. It makes economic sense - it's the biggest ground available to them. But in their current situation - Argentina are by no means certain of making it to South Africa - Maradona has decided that it does not make footballing sense.

"The stands in River's stadium are 50 metres from the pitch," he said recently. "You can shout yourself hoarse and the noise only reaches the area behind the goal. So there are players who feel that they will get more support in Rosario."

And so the game will take place in the much tighter, more compact Rosario Central stadium. At a little more than 40,000, the capacity is over 20,000 below the Monumental, but those fans will be closer to the pitch, creating an intimidating atmosphere and continually reminding the Brazilians that they are not on home ground.
It could work. But it could backfire. History provides evidence for both outcomes.

When they hosted the 1978 World Cup, Argentina were based in Buenos Aires and played their group games in the Monumental. After two wins, they lost the third game 1-0 to Italy, which meant that for the three second round matches they had to move north to Rosario.

This is usually seen as the moment when the players drew strength from having the fans closer to the pitch, and where the team picked up the momentum to go on and win the World Cup. But it could have turned out differently. Their second match in Rosario was against Brazil. It was an emotionally charged occasion, cranked up further still by the stadium architecture. Argentina lost their heads, and were drawn into a war. The game finished goalless, and coach Cesar Luis Menotti was so angry with the way that his side had let themselves down that he was unable to speak to his players for a couple of days afterwards.

Indeed, Argentina were only saved by the tournament's appalling organisation. In the final second round games Brazil played first, meaning that Argentina took the field against Peru already knowing how many goals they had to score to reach the final. Without such an advantage they may have paid a penalty for losing their discipline amid the passion of Rosario.

It is a similar risk they are running 31 years later. Saturday's game is much more important for them than their rivals. Brazil are serene; unbeaten in 17 games, settled and experienced, winners of the Confederations Cup, top of the qualifying table and all but certainly one victory away from guaranteeing their place in South Africa next year.
Argentina's situation is more edgy. Win on Saturday and they should be safe. Lose and they are caught up in a dogfight.

The stakes are high, the atmosphere will be intense. It will be fascinating to see how they react. If they are over-hyped there is the real chance that they will leave themselves over-exposed and play into the hands of Brazil's devastating counter-attack.

Thirty-one years ago Argentina had a player of their own who was as devastating as Kaka at breaking from deep. He was Mario Kempes, who had struggled through their group phase in Buenos Aires, but who suddenly found his form when the team moved north to Rosario.

The change of venue did him wonders. He was not a local boy. But he had made his name in a sensational mid-70s spell with Rosario Central, and going back to his old stamping ground brought out the best in him when it mattered most.
The modern day equivalent, very different in build but similarly left footed, is Lionel Messi. He is a local lad, though he is associated with the city's other team, Newells Old Boys, and, of course, never played professionally in Argentina. 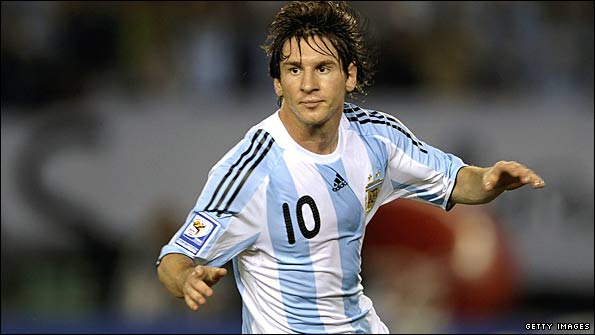 Messi is under pressure to deliver against Brazil

All eyes will be on Messi on Saturday. In 2007 he was anonymous as Brazil beat Argentina 3-0 in the final of the Copa America. Last year he was not too far off inflicting Brazil's first home defeat in World Cup qualifying, but the game in Belo Horizonte finished goalless. This time, in front of his home city crowd, he will be expected to deliver.

Rosario Central's stadium is known as 'Gigante de Arroyito - the giant of the little stream.' If Maradona's switch of venue works, then the energy will flow down from the terraces as one huge river and help Messi turn into a tiny giant on 5 September.

Q) I was wondering what you thought about the potential transfer of Sandro from Internacional to Tottenham.I don't know much about him, and £14m+ sounds a lot of money, though I trust Harry. Do you think this could be a move too soon for the player though? Liam Ablewhite

A) I think it could be a move too soon for his club! Inter have a fantastic production line, and make no bones about the fact that they will be selling their best players, but I'd imagine they'd want to hang on to him for a bit longer - say til the end of the Libertadores next August. There's also the World Youth Cup coming up in a few weeks - he captains the Brazil side - so that's a good shop window. Money talks, though, so we'll see. I think he has a really bright future - I picked him out in World Soccer magazine as one of the stars of the show in the South American Under-20s at the start of the year. He's a tall, holding midfielder, mobile, passes well, perhaps still to develop his defensive awareness. I've been expecting him to be fast tracked into the senior Brazil squad for a while, so wasn't too surprised when he got a call up last week after another midfielder pulled out injured.

Q) Could you tell me a bit about what Chilean Gonzalo Jara from Colo Colo who is joining my team West Brom but I know and have heard little about him.
Steffan Gruffudd, Aberaeron

A) I've been following him ever since the South American Under-20s at the start of 2005, when he was holding the Chile defence together, looking very promising but suffered from lapses in concentration - which seem to have been ironed out. He's a regular in the senior Chile side, fairly quick, solidly built but perhaps not the greatest in the air.